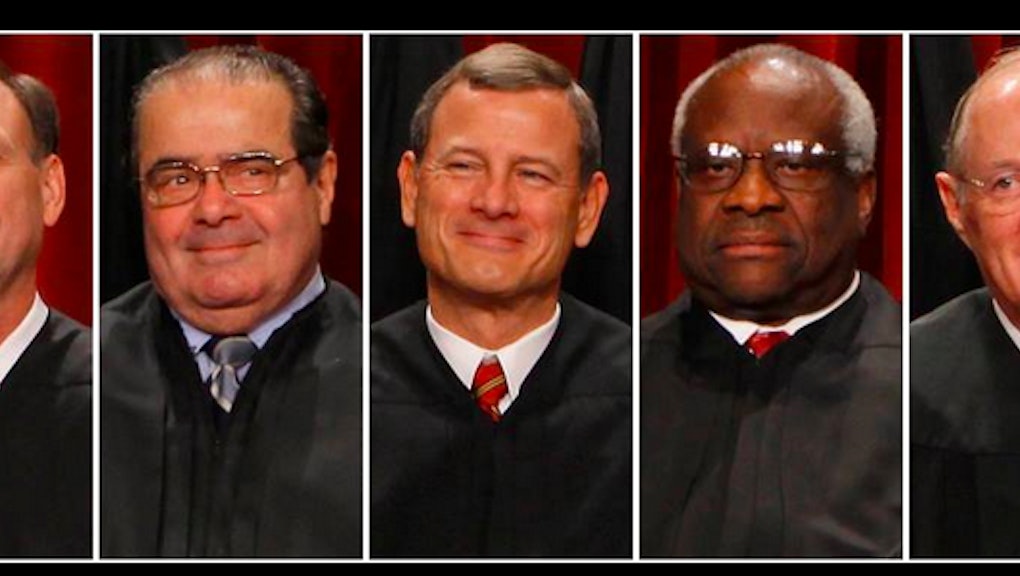 On Monday morning, the U.S. Supreme Court released its decision in the highly-publicized case of Burwell v. Hobby Lobby. SCOTUS sided with Hobby Lobby in a narrow 5-4 ruling, which declared family-owned corporations are not required to pay for insurance coverage for contraception under the Affordable Care Act if doing so conflicts with their religious beliefs.

That's right. In 2014, we are still arguing about women's right to contraceptives.

The decision is a clear blow to women's rights activists across the country, and, as the New York Times writes, "opened the door to challenges from other corporations to many laws that may be said to violate their religious liberty."

The real kicker? Not a single justice who voted in favor of Hobby Lobby can actually get pregnant.

Just let that sink in. Five men just determined what women across the country can and cannot do with their uteri, while all three female justices, along with Steven Breyer, sided against Hobby Lobby. If ever there were a call to having more women in positions of power, this is it.

In response, Justice Ruth Bader Ginsburg penned an epic 35-page dissent to the majority opinion in which she quoted the 1992 case of Planned Parenthood v. Casey. She wrote, "The ability of women to participate equally in the economic and social life of the Nation has been facilitated by their ability to control their reproductive lives."

These decisions remind us that women's reproductive rights are still under attack, and that we desperately need more women in leaderships roles — in courts, in businesses and in office. At least 2016 is just around the corner.