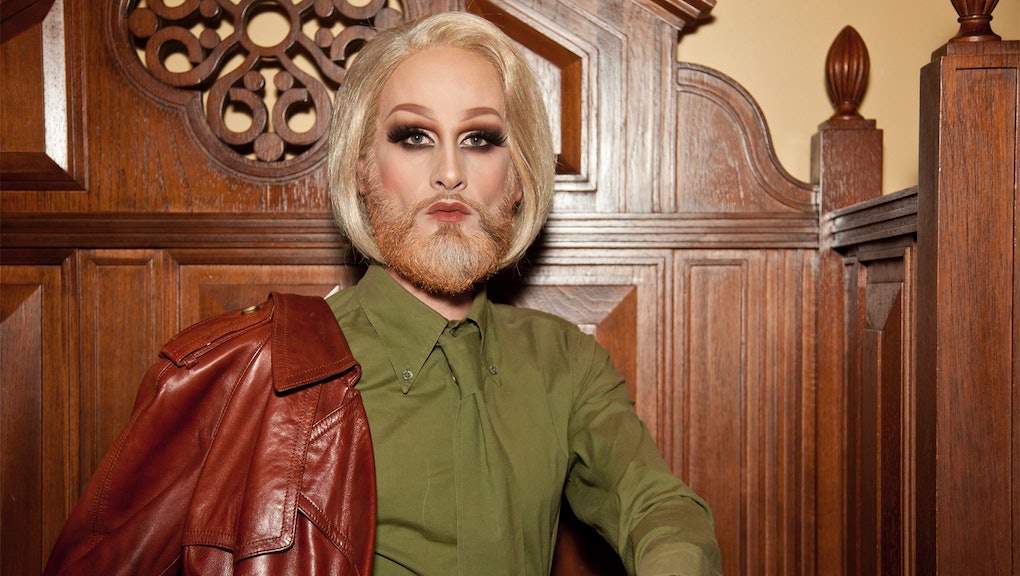 After decades of living by a binary societal code, more and more people are coming around to the fact that gender isn't fixed. It's fluid, and under the weight of individuality, it bends. This concept is gaining traction as more and more transgender and gender nonconforming individuals have their stories highlighted in mainstream media.

"What am I saying I am today? A beautiful bearded lady — really," subject Mathu Anderson, famed make-up artist and creative director for RuPaul's Drag Race, told Genderbent, a new series looking to document a group of individuals who have fought back against the strict gender roles dictated by society.

And what a vibrant and unique community it is. Using their unique aesthetics, androgynous, gender nonconforming individuals have been able to make names for themselves, primarily in the worlds of art and entertainment. Most recently, model Andrej Pejic was cast in Oscar-winning filmmaker Sofia Coppola's version of The Little Mermaid, likely as one of Ariel's sisters.

The project isn't just a photo series, Cunningham is quick to point out. Genderbent is about telling stories. "Many of the participants in this project find that their visual identity confuses people outside their community," Cunningham said. "I want the viewer to relate the photographic stories of the participants as they are seen, with the dialogue of the participants as they see themselves. Together, the photos and interviews give a complete story, one that can illuminate subject matter previously confusing, and therefore often frightening, to the general public."

But to what extent gender and gender expression differ and work together hasn't been as thoroughly examined. Nor have there been many instances of those in the gray being highlighted and praised for their individuality.

"People seem to be uncomfortable with anything they don't understand," Cunningham told Mic. "Many seem to still be in the dark about the individual words gender nonconforming people use to identify themselves."

Indeed, there are so many words people use to identify themselves with, including trans, trans*, transgender, genderqueer, gender nonconforming, non-binary, neutrois and genderfuck. Pronoun usage includes he/him, she/her, they/them and ze/zir, and pronouns and labels for identities change and shift. It really takes some consistent education to keep up with the dynamic, fluid community of gender nonconformers.

"It's easy to be caught up in making sure everything and everyone fits perfectly within the boundaries of the terminology we feel comfortable with," Cunningham said. "Many of the subjects in my series are discriminated against on a daily basis because of choices they've made, choices that shouldn't matter to anyone except themselves. Often these discriminations are based on what someone looks like. Illuminating and defining the variety of choices is the root of this project."

This community is strongly centered on appearance, and the discrimination that ensues stems from how far the individual has stepped outside of the societal boundaries of gender. Just last year a former host of BET sued the network for being forced to wear "men's" clothing. Even more recently, a DMV in South Carolina told a gender nonconforming teen to remove his makeup for his license photo. A national conversation erupted, as many were rightfully upset when the local DMV called his makeup a "disguise."

That self-expression of gender has been a key point often missed in mainstream conversations on this topic. Gender expression is your clothing choice, makeup usage and even the activities you partake in. It's the expression that is key, as that is the choice behind gender — how you choose to express it.

"Mathu Anderson is the same amazing person with or without a painted face," Cunningham told Mic. "Some of the subjects I've met only as their alter-ego painted selves. These personas are a part of their identity as much as the color of their skin or hair or the language they use, but it isn't the definition of their identity by any means. One man I shot is a straight married man who had been doing drag about 18 months. He quite joyfully has added his painted alter-ego as part of his identity. I think makeup is a very important aspect of identity to those who wear it and means little to those who choose not to."

The Genderbent series is currently crowdsourcing to fund this fascinating new series.