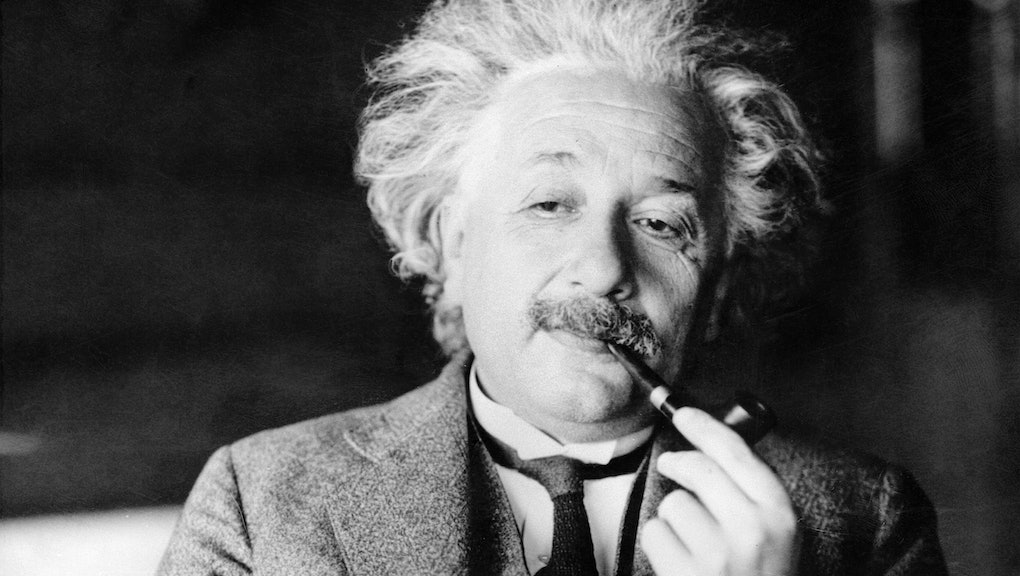 "I hope you will not think any the less of me for being a girl!"

This plea was sent to Albert Einstein by a young South African in the 1940s, and was recently unearthed as part of Alice Caprice's Dear Professor Einstein: Albert Einstein's Letters to and from Children. Although brief, Tyfanny's words capture the self-consciousness and self-doubt that have for so long plagued women who aspire to careers in science and technology.

In the letter, dated Sept. 19, 1946, a seemingly agonized Tyfanny admits to Einstein that she has left out a potentially damaging detail about herself. "I forgot to tell you, in my last letter, that I was a girl. I mean I am a girl," the young scientist writes. "I have always regretted this a great deal, but by now I have become more or less resigned to the fact."

The physicist's pithy response is a timeless lesson that bears repeating, all these decades later. "I do not mind that you are a girl, but the main thing is that you yourself do not mind," the Nobel Prize winner replied. "There is no reason for it."

There really is no reason why girls should doubt their abilities in science, technology, engineering and math (STEM). But for years, popular culture has fostered an environment that, purposefully or not, sends women and girls the message that boys should handle the power tools, lest the girls' dresses get a little dusty.

The gender imbalance in the sciences today, more than 60 years after Einstein encouraged Tyffany to feel confident in both her scientific passions and her gender, is arguably more pronounced than in any other field: Only 26% of all STEM workers in the U.S. are women.

This is a problem, especially given America's already-lagging educational system. "If we're going to out-innovate and out-educate the rest of the world, we've got to open doors for everyone. We need all hands on deck, and that means clearing hurdles for women and girls as they navigate careers in science, technology, engineering and math,” First Lady Michelle Obama said in a 2011 statement.

According to data from the National Science Foundation, included as part of Verizon's viral "Inspire Her Mind" commercial, 66% of fourth grade girls say they like science and math, but only 18% of all college engineering majors are female. So when do these potential Marie Curies lose their interest?

Much of this has to do with the significant bias that female scientists must overcome, but equally poisonous are thoughts that dissuade women from pursuing scientific careers, simply because they are women. For example, research has shown that teachers tend to rate white girls' math abilities lower than those of white male students, even when the girls' grades and test scores are comparable to boys.

"I think that the lack of women and girls in this field, it's an economic problem for the country," Reshma Saujani, CEO of the Girls Who Code initiative, told ThinkProgress. Saujani sees business sense in encouraging women to do this: "The more women you have creating these projects, the more girls becoming hackers and scientists and coders, the more products you'll sell. It makes business sense to get more women in this field."

The White House has taken note, as have private corporations like Google, where only 17% of those who work in tech divisions are women. Google's new Girls Who Code scholarship is part of an initiative, announced on Thursday, that would foot the bill for "thousands of women" to learn how to code. Unfortunately, the fine print is that Google is giving these scholarships only to women who are already working in tech. To tackle this problem, we first have to make sure that Tyffannys everywhere never have to worry that their heroes could think less of them, simply because they might wear a dress.