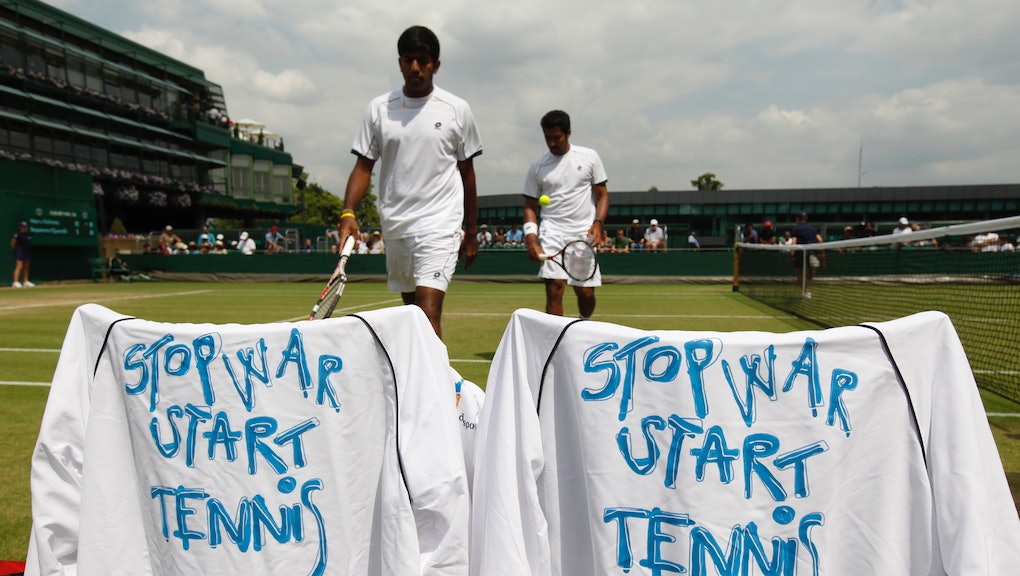 The partition of British India followed World War II, and ever since the independent states of India and Pakistan came into existence in 1947, the two countries have had a volatile relationship. The rapport has been characterized by wars, armed conflicts, numerous skirmishes and standoffs, and threat of nuclear conflict.

In sport, the two nations typically have a heated rivalry on the cricket pitch, which has been called one of the most intense sporting rivalries in the world. Millions across the globe tune in whenever the two countries face off.

On the tennis court, however, India's Rohan Bopanna and Pakistan's Aisam-ul-Haq Qureshi have mended some of the political and sporting divide between their two countries by forming a successful partnership on and off the court. The two men, currently in the thick of the Wimbledon men's doubles draw as the No. 8 seed, first met over a decade ago and formed a fast friendship. They bonded over their love of Bollywood and football, even though Qureshi supports Liverpool and Bopanna is a fan of Manchester United.

The "Indo-Pak Express," as they've been dubbed, first partnered up in 2003, but enjoyed a four-year run from 2007 to 2011 that included four titles, seven finals and two appearances at the Barclays ATP World Tour Finals in London, once as an alternate. The unlikely pair was thrust into the international spotlight during their run to the U.S. Open final in 2010, where they upset two higher-seeded teams and reached the championship match without dropping a set.

"Initially we did have a few problems, because a Pakistani was partnering an Indian at major tournaments, but people appreciate the fact that we're sticking together and have done well," Bopanna said during the pair's breakthrough season in 2010. "There isn't too much prejudice now, but I would be naive to say there wasn't any grievance."

"The beauty of sport is that it brings together different cultures and religions," Qureshi said, nearly echoing Mandela's famous words. "It is free from all the conflicts. ... Whether my partner is a Jew, Christian or Hindu, if I feel I can do well and promote tennis in Pakistan, then I will play with him."

The duo was also awarded the ATP Tour's Arthur Ashe Humanitarian of the Year Award for their "Stop War, Start Tennis" campaign, which began at Wimbledon in 2010, when they first proposed an exhibition match at the Wagah border between India and Pakistan (using the line that divides the countries as a "net"). They were also nominated as "Champions for Peace" by the Monaco-based organization Peace and Sport. The group of 54 athletes are "committed to serving peace in the world through sport," and includes Serbian fellow tennis player Novak Djokovic, Russian pole vaulter Yelena Isinbayeva and British distance runner Paula Radcliffe.

The duo split up at the end of the 2011 season, as Bopanna partnered countryman Mahesh Bhupathi in the lead-up to the 2012 London Olympics. Qureshi spent much of the last two seasons playing with Jean-Julien Rojer of the Netherlands.

Qureshi received the first Arthur Ashe Humanitarian Award of his career after partnering with Israeli Amir Hadad at Wimbledon in 2002 amid controversy, and returns to the All England Club this year with Bopanna by his side. The duo reunited earlier this year and won their fifth ATP World Tour title together in February, and both enter Wimbledon knowing a title at the sport's most prestigious tournament would give unprecedented visibility to their cause.