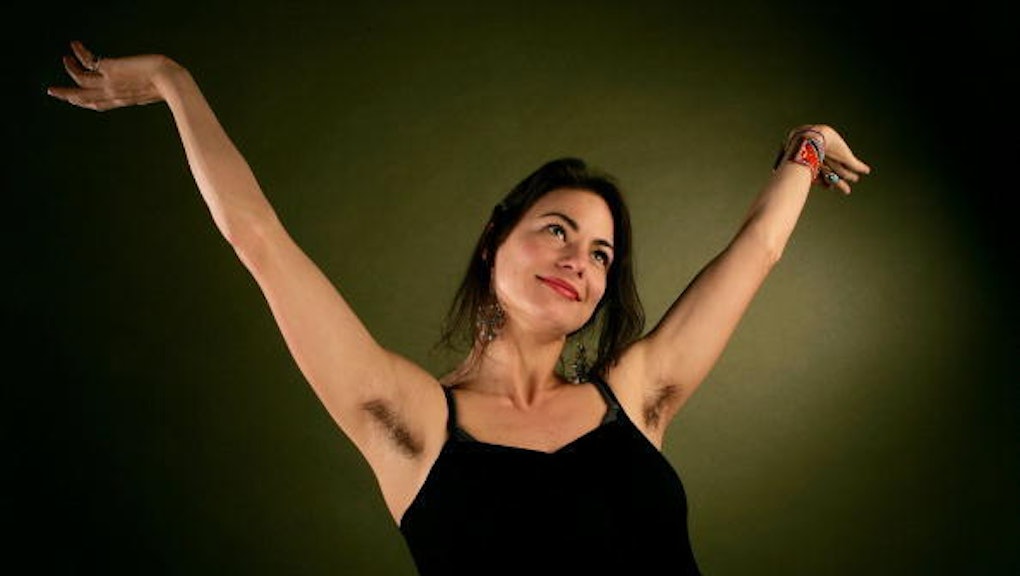 Why Women Are Grossed Out By Body Hair, According to Academic Research

Have you ever wondered why women feel compelled to shave — or wax or Nair, pick your poison — large swaths of their bodies? Why is hair on our legs, underarms and down there considered unacceptable, gross and even revolting? A new study published in Psychology of Women Quarterly pulls at this thread, aiming to quantify the "yuck" factor many women feel about their body hair.

As part of the study, Arizona State University professor Breanne Fahs conducted two experiments that she describes as a "side-by-side examination of women's imagined experiences of growing body hair with an experiential component of growing their own body hair." In the first experiment, Fahs measured women's responses to the thought of body hair, and in the second, she asked 62 undergraduate students to grow out their armpit and leg hair for two-and-a-half months and keep a journal about it.

In both instances, respondents reported overwhelmingly negative feelings about body hair, ranging from dirty to gross to downright disgust.

One participant, a 22 year-old Caucasian lesbian, claimed, "I think women who don't shave are a little gross ... I always shave. I don't like hair. I shave everything." Others, from the hair growth group, likewise recorded their revulsion, stating, "I constantly thought about my gross hair" and "I will never ever show anyone my pit hair." Apparently, their partners weren't big fans of the experiment either.

The study, named "Perilous Patches and Pitstaches: Imagined Versus Lived Experiences of Women's Body Hair Growth," reveals what feminists have long suspected: The compulsion to aim for hairlessness is not about hygiene, but, as New York magazine's Lisa Miller aptly put it, "is an example of how women have internalized patriarchal ideals of femininity." Indeed, Fahs wrote that the study was meant to "highlight the invisibility of omnipresent sexism directed toward those who violate practices to 'maintain' the female body."

Even though body hair has a biological, evolutionary purpose — it traps and wafts pheromones, announcing our sexual and reproductive availability — society dictates that for females, it's not just unnerving, it's nasty. When you take this cultural attitude, coupled with ubiquitous beauty and shaving products marketed to women, it's no wonder women spend up to 72 days of their life shaving.

But it's not just scholars looking into this issue. BuzzFeed recently made headlines when it asked women why they shave their legs. Their answers, captured on video, reflect a general distaste for body hair (in this case, leg hair), even if we don't know why, exactly.

For example, one woman admits to not knowing why she shaves, and another explains her propensity for hair removal "'cause that's what people do," while another admits to shaving if she thinks someone she likes will see her legs.

Fifteen years after Julia Roberts infamously revealed a hairy armpit at the 1999 London premiere of Notting Hill and a full century since Gillette released its first razor, have we finally evolved to a place where a woman's body (and hair) is her own? Or, rather, has the socialization of the anti-body hair movement become so ingrained in popular culture that women may never be completely free of its double-edged grip? The conversation continues.