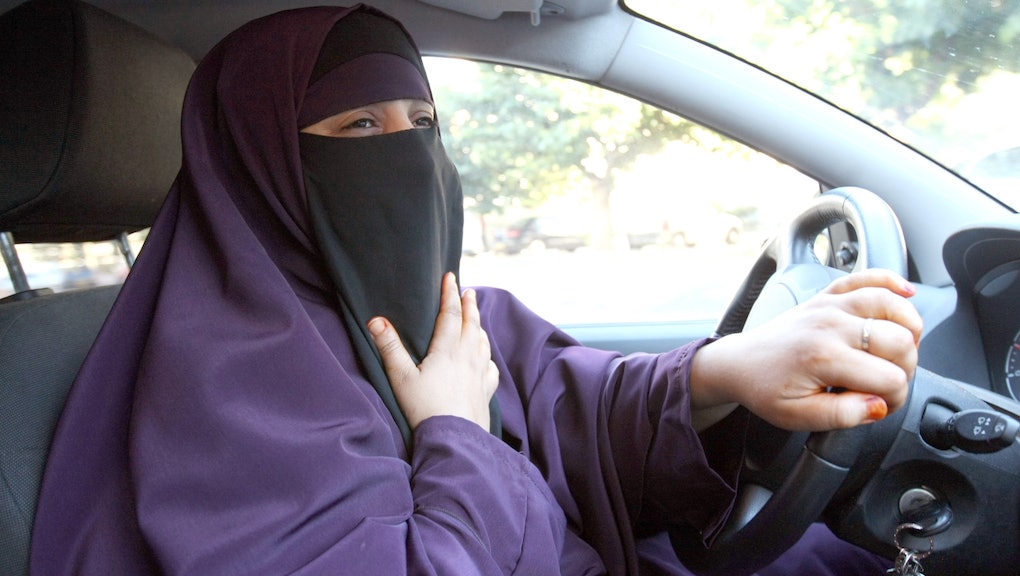 "My husband doesn't dictate what I do, much less the government."

Appearing on French television to oppose the burqa ban law in France, Kenza Drider, a 32-year-old mother of three says she lives in fear of attack daily.

"I'm insulted about three to four times a day," Drider told the Guaridan. She's also heard insults like "Go home," "We'll kill you" and "We'll do to you what we did to the Jews." One man even tried to run her down in his car.

Sadly, Drider, like many in her position in France, will continue to live in fear, after the European Court of Human Rights (ECHR) upheld France's controversial ban on full-face veils such as burqas and niqabs — a "victory" for France and Belgium who have passed laws banning clothing that conceal a person's face.

Passing the law against concealing one's face in public spaces in 2010, the French government argued that the ban helps protect public safety, prevent identity fraud and protect women who are forced the wear the veil. The law has since sparked fierce debate between religious freedom advocates and those who argue that the Islamic veil is demeaning and oppressive to women.

While the ECHR ruled that the ban wasn't justified on public-safety grounds or protecting women's rights, the ban was legitimate on the basis of "improving social cohesion."

"The court was … able to accept that the barrier raised against others by a veil concealing the face was perceived by the respondent state as breaching the right of others to live in a space of socialization which made living together easier," according to the ruling.

However, since the passing of the law, there has been a signficant increase in discrimination, verbal and physical violence against women in veils and numerous instances of people taking the law into their own hands by ripping off veils, refusing entry to veiled women and even bus drivers refusing to carry women in veils.

So much for "socialization."

A 24-year-old French woman of Pakistani origin took the case to court in November arguing that the law restricted her ability to live freely according to her religion, culture and beliefs. Represented by solicitors from Birmingham in the U.K., they argued that the law was "inhumane and degrading, against the right of respect for family and private life, freedom of thought, conscience and religion, freedom of speech and discriminatory."

Image Credit: Getty Images. The attorneys representing the woman who brought the complaint forward to the ECHR.

The French government responded by asking that the court throw out the case, claiming that the law was aimed at any covering of the face in a public area and not just the burqa. Apparently, it also applies to hoods and helmets when not working on a motor vehicle, although those cases have not been targeted, fined or arrested yet.

French politicians in favor of the ban have continued to argue that the government is acting to "protect gender equality" and the "dignity of women." Some have even referred to it as a "walking coffin, a muzzle."

Gender inequality in France's Muslim communities will hardly be remedied by the ban, and that's because this isn't actually about women's rights — it has much deeper, more harmful roots. It underscores Europe's harsh attitude toward immigrants, as well as the discomfort and perceived threat of the growth of Islam and immigrants to French identity. What they have as a result is a harmful, racist and highly undemocratic law loosely held together under the pretense of empowerment, protection and secularism.

Last I checked, telling women what they should or should not wear does not scream liberté, egalité, fraternité.

According to the International League for Women's Rights President Annie Sugier, "The full-face veil, by literally burying the body and the face, constitutes a true deletion of the woman as an individual in public." Ironic, considering the fact that the woman who brought the case to the European court wasfighting for her rights, her voice and those of thousands of other women in the country.

As Mic editor Sara Yasin aptly put it: "It's pretty ludicrous to think that oppression is somehow proportional to how covered or uncovered someone's body is. Both sides of this argument present a shallow understanding of women's empowerment, which only drowns out the substantive challenges facing all women — issues that cannot be encapsulated in a debate about a piece of fabric."