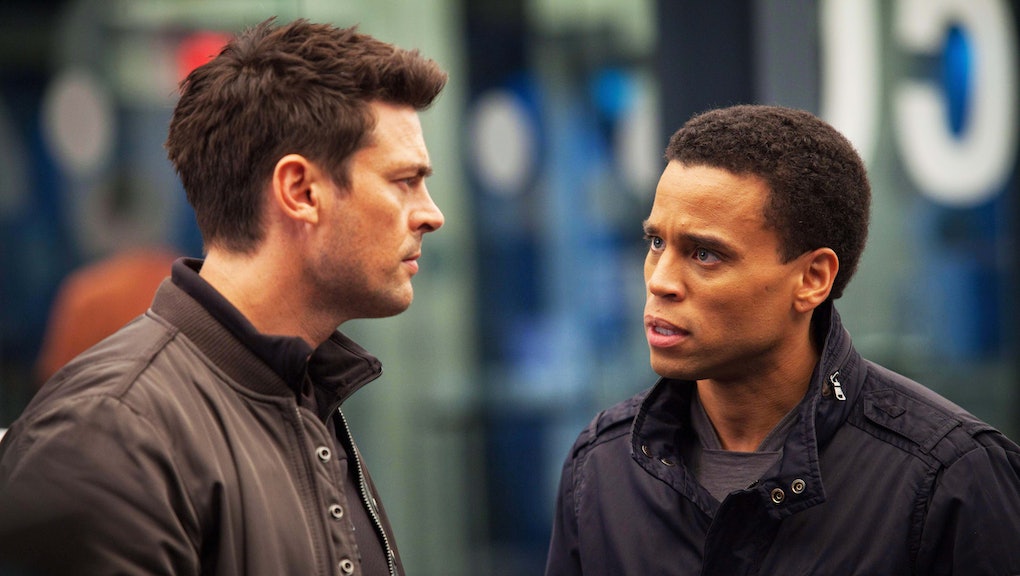 Almost Human had a splashy debut last fall on FOX. It was marketed like any other new television show, with all the hype you'd expect: full-on press, flashy promos, breathless Facebook updates. High-tech and futuristic, the show featured two handsome leads, science fiction storylines and nods to popular cinematic influences like Blade Runner and Aliens.

Even so, Almost Human did not get renewed for a second season. The cancellation of what was once one of the most anticipated sci-fi TV shows has led to questions about the viability of sci-fi programs on broadcast television, and highlights the limitations of traditional network television when it comes to producing and cultivating these programs. In sum, they just can't figure out how to do it.

Set in 2048, Almost Human revolved around the relationship between John Kennex (Karl Urban), a cop who awakens from a coma to find he has a synthetic leg, and his partner Dorian (Michael Ealy), a robot who betrays human emotions. Issues like crime, disability, friendship and the centrality of relationships to human happiness were explored; the show's title became less of a signifier than an ironic take on what it means to be human in a high-tech, fast-paced world.

During its run, I wrote about Almost Human and its vision of a tech-heavy (if hopeful) future; a beguiling thread of humanity ran through each episode, which, like Star Trek before it, was part of its great charm and appeal.

Produced by J.J. Abrams' Bad Robot Productions and Warner Brothers Television, the program had sci-fi credentials in all the right places. Abrams had a massive built-in fan base, being at the helm of hugely popular programs like Fringe, John Doe, Lost and Alias, not to mention his involvement in both the Star Trek and upcoming Star Wars reboots.

Additionally, Almost Human also had a lead actor who came with a sci-fi following — Urban previously played Dr. McCoy in Abrams' Star Trek and Star Trek: Into Darkness. Urban was also known for playing Eomer in Peter Jackson's Lord of the Rings movies, has appeared in a string of sci-fi-leaning films including Doom, The Chronicles of Riddick, Priest and Dredd, and regularly appears at international comic cons. One could surmise that Almost Human had its audience built in even before its mid-November premiere.

Still, FOX's record with the genre wasn't stellar: John Doe, Firefly, Terra Nova and Terminator: The Sarah Connor Chronicles all had short lives. Because of that, longtime fans of science fiction TV were cynical of Almost Human having any lasting success; they'd seen how FOX treated sci-fi in the past. Their fears were founded, and Almost Human's cancellation followed the predictable pattern.

Their fears were confirmed when Almost Human's 13 episodes were aired out of order, just like Joss Whedon's Firefly's had been. Sci-fi viewers and fans of the show saw this 13-episode mix-up as proof that the network wasn't committed to the show.

While FOX gave no reason for airing episodes out of order, there was drama behind the scenes. Almost Human, while seeing a dip in viewers after its premiere (which reached 9.1 million viewers), maintained the same ratings as the network's other scripted dramas, but network executives at FOX felt that wasn't enough to justify its continuance, according to a report in New York magazine.

Agreeing that Almost Human was an asset to the network, industry insiders and fans speculate that the network's cancellation of the show shared roots with the departure of entertainment chairman of the FOX Broadcasting Company Kevin Reilly. It's speculated that Reilly's interest in continuing the show, part of a larger vision for the network, clashed with the intentions of Fox Networks Group CEO Peter Rice.

However, the series' failure highlights a larger problem: the disconnect between the old tried-and-true network business model and the ways sci-fi fans consume, share and engage in their passion.

Television broadcasters have watched their collective market share of 18- to 49-year-old viewers (advertisers' dream demographic) decline sharply since 2000, a fall that coincides with the rise of digital and time-shifting technologies. Executives from both broadcast (NBC, ABC, CBS and FOX) and cable (AMC, TBS, HBO and others) are trying to get Nielsen (the company measuring TV ratings) to better tabulate viewership by providing more accurate counting of online streams and viewership outside the traditional three-day window. Those are good steps, but recognizing sci-fi viewers with nontraditional consumption patterns (including Apple TV, VPNs or BitTorrent software) is the next challenge.

Networks (and advertisers) might also consider ways to measure the activities of a passionate sci-fi community who don't conform to traditional measurement methods. These are fans who engage in social media, make clips and .gifs, write blogs, tend fanpages, attend comic cons, engage in cosplay, write fanfiction, make fanart and engage in lengthy debates on forums like Reddit. Updating Nielsen tabulations is a good initial step, but in sci-fi fandom terms, it's a drop in the bucket, and it doesn't really solve the problem of how a traditional network might best produce and support a sci-fi show right from its very inception.

One mainstream network is trying to do things differently in this respect. CBS' Extant, featuring Halle Berry, has a unique deal between broadcaster and digital property. According to the Los Angeles Times, the network splits roughly half the production bill with Amazon (each episode costs roughly $3 million), with foreign sales paying for the other half. In exchange, Amazon has the rights to stream another sci-fi show on CBS, the popular Under the Dome (adapted from Stephen King's 2009 novel) on its website within mere days of broadcast, a notable departure from the typically lengthy delay (often weeks or even months) of online episode postings.

Such a deal complements its broadcast property by openly embracing the technology by which sci-fi fans become aware of and consume the show, while quietly acknowledging the limitations of traditional network systems in producing successful sci-fi TV.

Such a partnership may be unorthodox in the harsh world of network TV, but it is well suited to the sort of viewership sci-fi programs bring and, in many cases, already have. With production costs for sci-fi TV considerably higher than other shows, it's logical for traditional networks to invest in visionary sci-fi programs for the long haul, with daring partnerships that openly embrace digital properties (ones that sci-fi fans actively engage with), instead of trying to compete with them.

As the cancellation of Almost Human proves, business-as-usual TV doesn't work in the world of science fiction. Creative partnerships and a more active acknowledgement and measurement of online sci-fi fandom will lead to more compelling television. After all, there's a difference between robots on TV and robots running networks. It's time sci-fi fans got one, and not the other, for keeps.