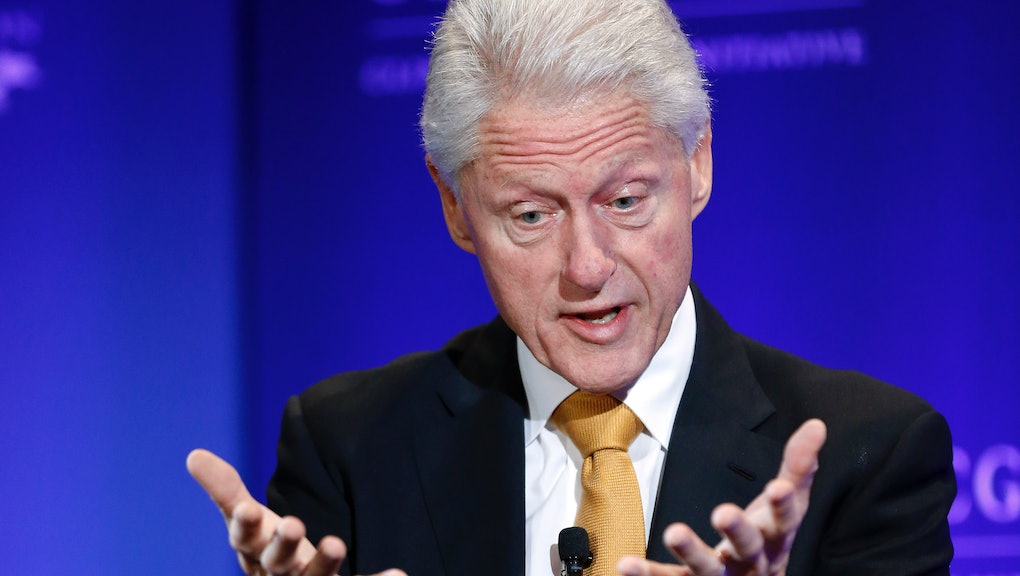 Bill Clinton Just Made a Surprising Statement About Medical Marijuana

He supports it. In an interview on NBC's Meet the Press, the 42nd president said that he believes there is an argument for medical marijuana and that the states should continue experimenting with legalization to address any unresolved concerns.

"Look, I think there's a lot of evidence to argue for the medical marijuana thing. I think there are a lot of unresolved questions," Clinton told NBC's David Gregory. "But I think we should leave it to the states. This really is a time when there should be laboratories of democracy because nobody really knows where this is going. Are there adequate quality controls? There's pot and there's pot; what's in it? What's going to happen? There are all these questions. And I think that, unlike where it is now, if the state wants to try it, they can. And then they'll be able to see what happens."

This is huge. It's incredibly rare for a president, sitting or former, to make a supportive statement about marijuana, and now we have both. Clinton's sentiment echoes Obama's statements to the New Yorker earlier this year that states are the laboratories of democracy and that the legalization experiment is one worth undertaking.

A fickle history of support. On his first presidential campaign trail, Clinton famously admitted to trying cannabis while at Oxford, buffering the claim with "I did not inhale." Years later, author Christopher Hitchens, who was at Oxford at the same time, revealed that Clinton didn't have to inhale to enjoy weed. In his memoir, Hitchens says Clinton was more into edible pot. Regardless of his preferred delivery method, Clinton did little to nothing to advance progressive cannabis legislation during his presidency. In fact, his administration escalated the drug war throughout the '90s. Regardless, after the end of his tenure, he told Rolling Stone that decriminalization is the right thing to do. And just last year Clinton stressed that his famous statement wasn't a denial of pot use.

But it runs in the family. Potential presidential candidate Hillary Clinton previously made statements about the drug war that raged on during her husband's presidency. She said that legalization was not the answer, but since then seems to have changed her tune. She recently said that she supported medical marijuana for the seriously ill and believes there should be more research. She even professed a "wait and see" attitude toward recreational legalization.