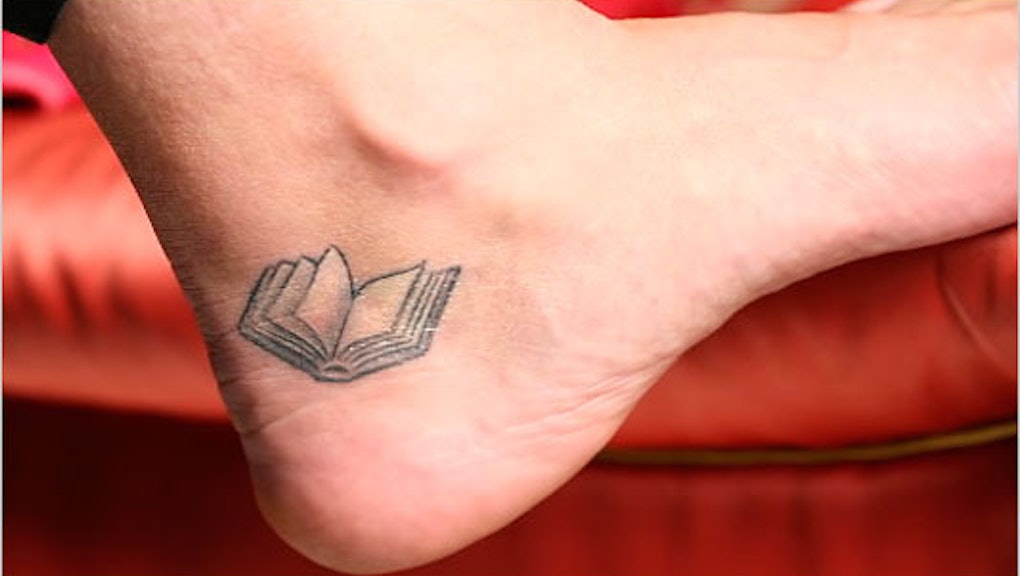 Bookworms aren't the immediate mental go-to when thinking of a person covered in tattoos, but a quick dive into Tumblr and Pinterest proves that assumption to be very wrong. After all, a tattoo is for life, and what better way to celebrate a book that changed your life than to partake in the most literal form of self-publishing?

One in 5 U.S. adults now have a tattoo, including plenty of famous people with literary tattoos (Ryan Gosling's Giving Tree tattoo made our list). But it's not just celebrities whose tattoos are admired by millions. Social media is full of tattoo photos, and there are sites dedicated to the strange and beautiful universe where literature and tattoos meet.

While tattoos inspired by literature are a more recent trend — a 2009 Forbes article calls them "a paradox of the digital age" — literature has been inspired by tattoos for ages. Consider Hester Prynne's scarlet "A," a symbolic tattoo that marked her as different from society, or Queequeg, the tattooed harpoonist in Moby-Dick.

Some novels are more popular for ink than others. Publisher's Weekly ranked the five books that inspire the most tattoos: Fight Club by Chuch Palahniuk, The Little Prince by Antoine de Saint-Exupéry, Where the Wild Things Are by Maurice Sendak, Alice's Adventures in Wonderland by Lewis Carroll and Slaughterhouse-Five by Kurt Vonnegut.

To shed light on this world of letters and ink here are 15 tattoos inspired by books that will stay with their readers for life, literally.

1. 'Where the Sidewalk Ends' by Shel Silverstein

"I've heard tell that Fortune, as they call her, is a drunken and capricious woman and, worse still, blind; and so she doesn't see what she's doing, and doesn't know whom she is casting down or raising up."

This tattoo is based on Pablo Picasso's artistic interpretation of the novel.

4. 'Where the Wild Things Are' by Maurice Sendak

"There should be a place where only the things you want to happen, happen."

Though perhaps not as traditionally literary, the clever location of this tattoo certainly conjures memories of hours bent over Where's Waldo books.

6. 'The Fault in Our Stars' by John Green

"My thoughts are stars I cannot fathom into constellations."

"So we beat on, boats against the current, borne ceaselessly into the past."

"Never say goodbye, because goodbye means going away and going away means forgetting."

9. 'The Giving Tree' by Shel Silverstein

"Once there was a tree, and she loved a little boy."

10. 'The Tempest' by William Shakespeare

"What's past is prologue."

"All that is gold does not glitter,

12. 'Pride and Prejudice' by Jane Austen

"Obstinate, headstrong girl! I am ashamed of you!"

13. 'The Perks of Being a Wallflower' by Stephen Chbosky

"And in that moment, I swear we were infinite."

"The mind is not a book, to be opened at will and examined at leisure!"

A tattoo was inspired by indecision; the tattoed couldn't pick a favorite book to quote. Instead of getting different tattoos, she combined many quotes into a beautiful literary collage.

Quotes from: The Name of the Wind by Patrick Rothfuss, The Night Circus by Erin Morgenstern, Pride and Prejudice by Jane Austen, Oh the Places You'll Go! by Dr. Seuss, Ella Enchanted by Gail Carson Levine, A Wind in the Door by Madeline L'Engle, Romeo and Juliet by William Shakespeare, The Time Traveler's Wife by Audrey Niffenegger, Kushiel's Dart by Jacqueline Carey, The Big Orange Splot by Daniel Manus Pinkwater, Gone with the Wind by Margaret Mitchell and Horton Hears a Who by Dr. Seuss.