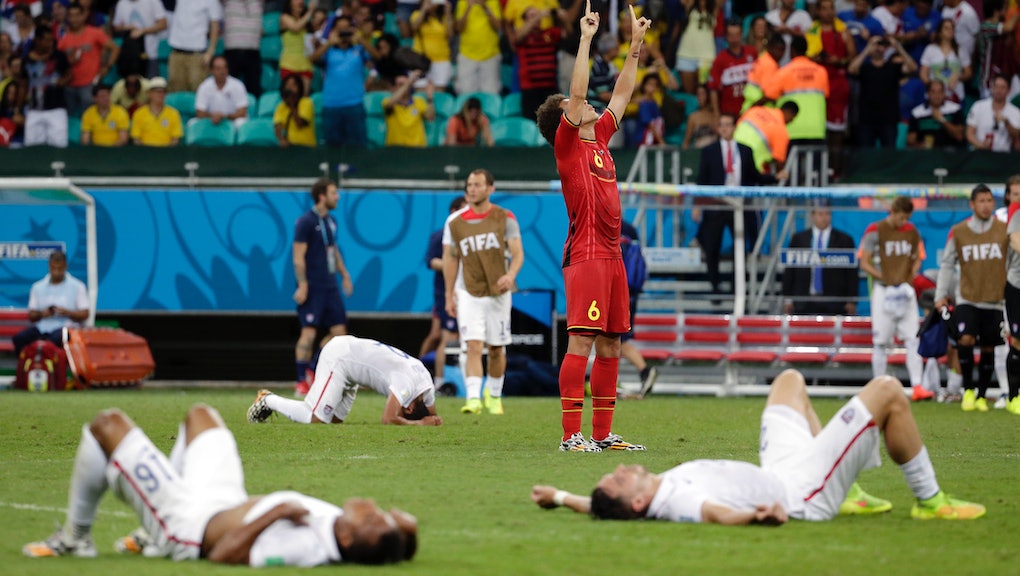 Was America's Captivating World Cup Run a Sign of Victories to Come?

The U.S. fought valiantly for 120 minutes Tuesday in Salvador, but even Tim Howard's heroic 16 saves weren't enough as Belgium broke through with two goals by Kevin De Bruyne and Romelu Lukaku in extra time and won 2-1.

Julian Green scored on his first touch of the game to cut the two-goal deficit in half, but the Americans' defensive tactics had led to tired legs in the extra half-hour, where the fresh legs of Lukaku made all the difference. Here's a look at a few of the decisions that influenced the Americans' World Cup ouster in the Round of 16.

The U.S. formation was illustrated as a 4-3-3, but the Americans assumed a 4-5-1 for great stretches of the game, which is typically a 4-5-1 defensively that shifts into a 4-3-3 in attack. However, several trends from the previous games prevented the U.S. from venturing forward and being proactive offensively. The back four stayed the same from the Germany game: Fabian Johnson, Omar Gonzalez, Matt Besler and DaMarcus Beasley. In the midfield, Michael Bradley moved deeper in the midfield taking up the role previously played by Kyle Beckerman. The combination of Geoff Cameron and Jermaine Jones played in front of Bradley with Alejandro Bedoya and Graham Zusi being utilized wide on the flanks. Clint Dempsey was the lone target up top.

The game plan was geared toward advancing at any cost, and it appeared that the aggressive, possession-based style of play in which the Americans would look to play forward and commit numbers into the attack would pay the price.

The anticipation of Jozy Altidore starting and both Dempsey and Bradley playing more familiar roles evaporated with Altidore's exclusion from the starting lineup. Ultimately, there was too much risk inserting a player that may need a substitution early in the game. The lack of a true target that could play with his back to goal against the big, physical back four of Belgium limited the possibilities of holding the ball up front and allowing the midfielders to join the attack. The U.S. was left living off counterattack opportunities that proved few and far between.

Beckerman was on the bench for the first time of the tournament. He had played reasonably well in the holding midfield role and seemed deserving of another start. Bradley started again and his performance improved, but for the fourth time in four World Cup games, he failed to resemble the player that helped carry the team through qualifying.

The game started with an Divock Origi breakaway and a huge save from Howard in the first minute of the game to prevent catastrophe for the Americans, but it would be a sign of what was to come. Howard would set a record with 16 saves in a single World Cup game and the Belgians would get off 38 shots (with 27 on-target).

An early injury to Johnson at 32 minutes made way for DeAndre Yedlin to be brought off the bench and inserted at outside back. He made an immediate impact, getting up and down the flank overlapping Graham Zusi and helping break a stretch of almost 10 minutes of Belgian possession.

There were substitutions at the half and no apparent changes tactically. The U.S. played to keep the score 0-0 as long as possible, waiting for counterattacking opportunities and set pieces to commit numbers into the box. The Red Devils stepped up their pressure defensively and committed their backs forward Vincent Kompany and Jan Vertonghen were getting forward at will. If not for Howard, the game would have been decided in the first 15 minutes of the second half. Kevin Mirallas, who scored for the Red Devils against Algeria, was inserted into the game at the hour mark.

The U.S. wanted to finish it before extra time

The 72nd-minute substitution of Chris Wondolowski should have been a signal that the Americans were going to go forward and attempt to steal the game in regulation, but the Belgians were not going to comply. Howard was called on to make several big saves in the last 10 minutes to keep the score level. The substitution nearly paid dividends in injury time with a Jones header falling to Wondolowski inside the six, Thibaut Courtois came out and knocked the attempt over the bar.

The match, like so many in the knockout stage already, would head to extra time. While the team defense and Howard were stout throughout regulation, cracks began to show as time progressed.

Lukaku brought in fresh at the start of extra time would prove a handful for the American back line. First running through a tackle with Besler defending, turning down the end line to play a ball a cross that lead to De Bruyne's far-post finish, then scoring one of his own off an assist from De Bruyne. There are not many teams in this World Cup that can bring players of Lukaku's quality off their bench, which calls into question whether Green should have been inserted earlier, perhaps instead of Wondolowski.

The U.S. had us believing they could win, but with a 2-1 loss and very defensive tactics will everyone still believe in Klinsmann moving forward? American fans were captivated and riding the patriotic wave the team's World Cup run created, but I am left with one question.

For the 20 minutes Altidore played in the group-stage opener against Ghana, we saw the United States in a 4-3-3 formation. That was questionable, with the Americans appearing to sit in after Dempsey's early goal. The U.S. Soccer Federation is pushing the 4-3-3 at every level of youth soccer, as are many of the Youth Academy Programs. However, when they needed to change tactics to prioritize results over quality of play, the last three-and-a-half years of talk about progressive play seemed to evaporate.

We saw Green late for 15 minutes and he scored on his first touch, John Brooks played less than a half and scored the game-winner against Ghana, and Yedlin was very dangerous on the flank when he was inserted. We scored five goals in this World Cup and these three young players had a role in four of them, yet their time on the field was limited.

We were told by head coach Jurgen Klinsmann before the tournament that it was "unrealistic" that the U.S. would complete for the championship this cycle. Then shouldn't we be building for the next four to eight years? Shouldn't that start with getting these young impact players on the field now?

The results for the Americans in this World Cup were positive: escaping one of the tournament's two Groups of Death and taking the Belgians to the brink with some late opportunities. But whether Klinsmann will continue to develop the young talent in the U.S. so that we are capable of playing an attractive brand of attacking soccer at the 2018 World Cup in Russia remains a matter of faith.