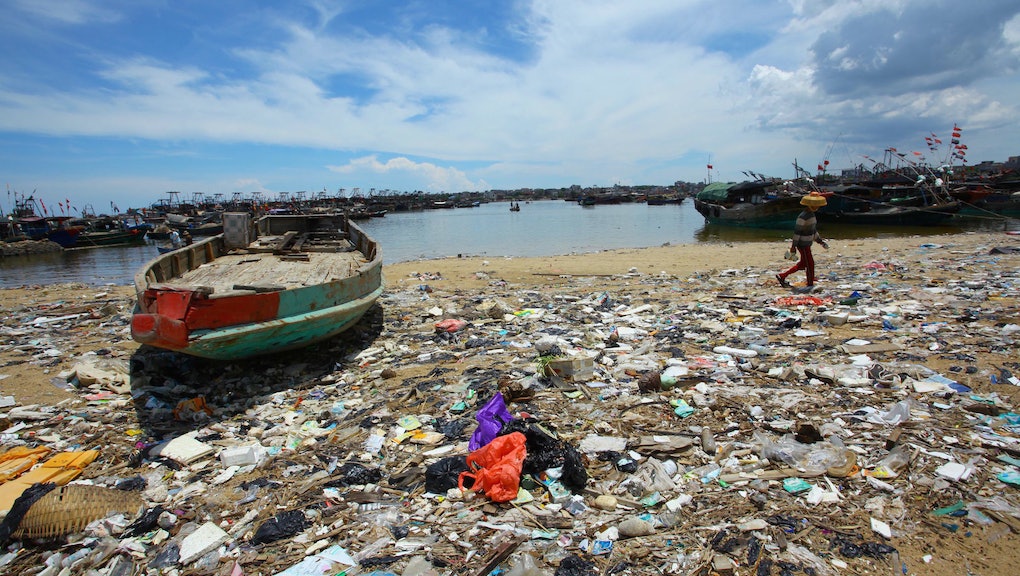 The news: According to some reports, there should be enough plastic junk floating around the Pacific Ocean to form an island the size of Texas. But 99% of our plastic trash has gone missing, and it could be making its way into our food web.

"We can't account for 99% of the plastic that we have in the ocean," said Carlos Duarte, an oceanographer at the University of Western Australia, Crawley and the leader of a recent expedition. His team's findings were published online Tuesday in the Proceedings of the National Academy of Sciences.

Instead of the millions of tons scientists had expected, Duarte's team of researchers, who recently traveled the world's oceans, found only a few thousand tons — way less than expected, considering we produce 300 million tons of the stuff each year.

Image Credit: Proceedings of the National Academy of Sciences

So where's all of that plastic? Fish and birds are eating it, according to the research team's thesis. After they consume the remnants of our used plastic bags and bottles, seabirds and fish usually choke and die.

But sometimes, the plastic pieces are small enough to make their way into their stomachs, where they clog up the animal's digestive systems, making them feel permanently full. Then they starve to death.

The worst part is that our plastic also sucks up the other pollutants we leach into the sea, from pesticides to toxic hydrocarbons known as PCBs and mercury, and concentrates them. So the fish and birds that eat our trash aren't simply choking to death — they're being poisoned.

5 mm = less than a quarter of an inch. Image Credit: Proceedings of the National Academy of Sciences

Eventually, all of that trash could make its way back to us. If the detritus is small enough to pass through the fish's digestive systems, scientists think they could eventually be deposited on the ocean floor as fish poop. Or they could be eaten later by bigger animals. "There is potential for this plastic to enter the global ocean food web," Duarte said. "And we are part of this food web."