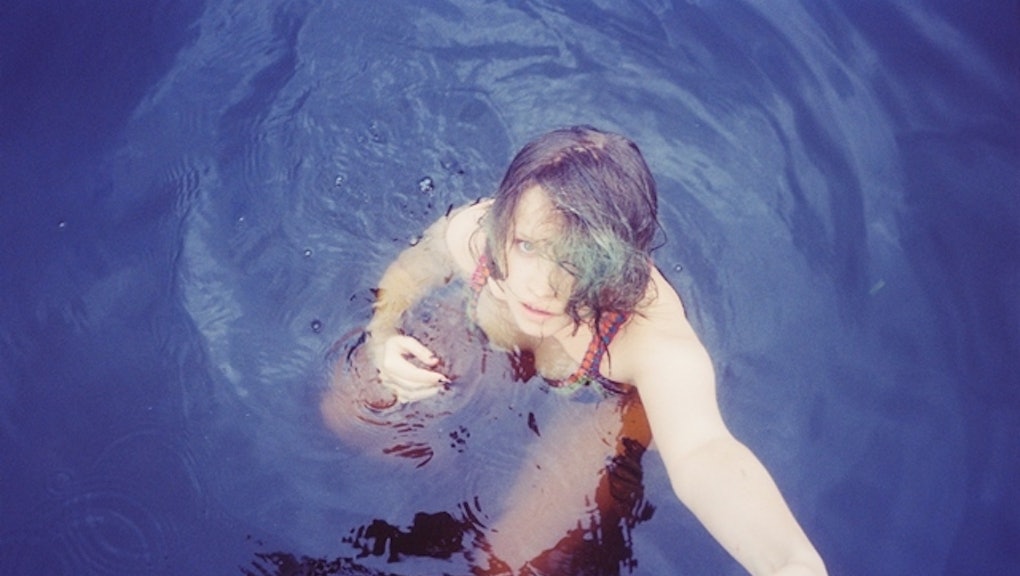 This Photographer Perfectly Captures How It Feels to Be a Teenager

Photographer Olivia Bee has given two TEDx talks, shot commissions for Hermes, the New York Times and Vice, and counts 18-year-old wunderkind editor Tavi Gevinson among her many high-profile admirers. She also has a huge body of work that has just finished exhibiting in SoHo, New York. All that, and she is also just 20 years old.

With no formal training, Bee has become a go-to photographer for a very particular, and popular, '70s-inspired aesthetic that screams today's teen. Giving the finger to the rule of thirds, Bee centers her subjects and gives photos splashes of soporific pastel color, capturing moments of youthful chaos and relaxation. This is a photographer who wants to give a very different portrayal of youth from the artists who have come before her.

"Her photos resonate because they're honest," Gevinson told New York Magazine, "it doesn’t feel like she's trying too hard to create a certain image."

It may not seem like a big deal to offer these lazy, charming portrayals of teenage downtime. But artistic representations of people under the age of 25 are often defined by portrayals of spoilt, overeducated, unhappy, malignant characters. Sometimes the artist is self-aware enough to make this work, sometimes they ask us to indulge in upper-middle-class young adults drunk driving and burning out. It is a trend that goes back as far as the 1920s, but one that Bee breaks from.

F. Scott Fitzgerald's The Beautiful and the Damned, Evelyn Waugh's Vile Bodies and Joseph Moncure March's The Wild Party all look at the young, pretty, foolish partygoers of the Roaring '20s who are nearly all well-educated, rich and aimless. Less affluent, more focused characters often only appear as narrators or as the holy fool who sees everyone else's doom. The beat writers focused again on Ivy League existentialism, Allen Ginsberg focusing Howl on the "angelheaded hipsters burning for the ancient heavenly connection to the starry dynamo in the machinery of night." Donna Tartt did something similar in her '90s classic The Secret History. Today it is the domain of Sofia Coppola or Lena Dunham's young, disenfranchised protagonists.

Bee's figures are less affluent, less dour and more optimistic. The closest they get to transgression is in "Anna (Bitchcraft)," and even then, the figure of Anna only spray paints a heart on a wall.

Bee's work doesn't focus on the melancholia and tension of young, suburban American life. Although her dream-like, lackadaisical images bring to mind Coppola's palate, they are not tempered with the poe-faced fear for the younger generations. Bee has no interest in showing the pressures of the millennial generation, instead she focuses on the happier moments of youth. Take for example "4th of July (The Family You Choose)" — just friends, hugging in the waves, united and happy.

Olivia Bee, "4th of July (The Family You Choose)"

Bee's style also fits into the current zeitgeist for sincere, seemingly amateurish photos. It has the overexposed simplicity of the controversial but ubiquitous Terry Richardson, and the family album unpretentiousness of iconic, and also very young, fashion photographer Petra Collins. It helps that Bee is a home-grown talent with no formal training, and is curating tableaus of youth as a youth herself.

"There's so much trust in these photographs," Bee says of her photos in a press release for her New York exhibition, "everyone sees eye to eye and is on the same level." As a girl growing up as part of this generation, her romanticism comes from her immediacy, not from nostalgia or condescension. She herself knows the value of remembering the moments that make life worth living, and it's this optimism and knowingness that have brought her such success.

She may not want people to talk about her age so much, but actually it may be her greatest virtue.

All images used with the permissions of the agnès b. Galerie Boutique in SoHo, New York.