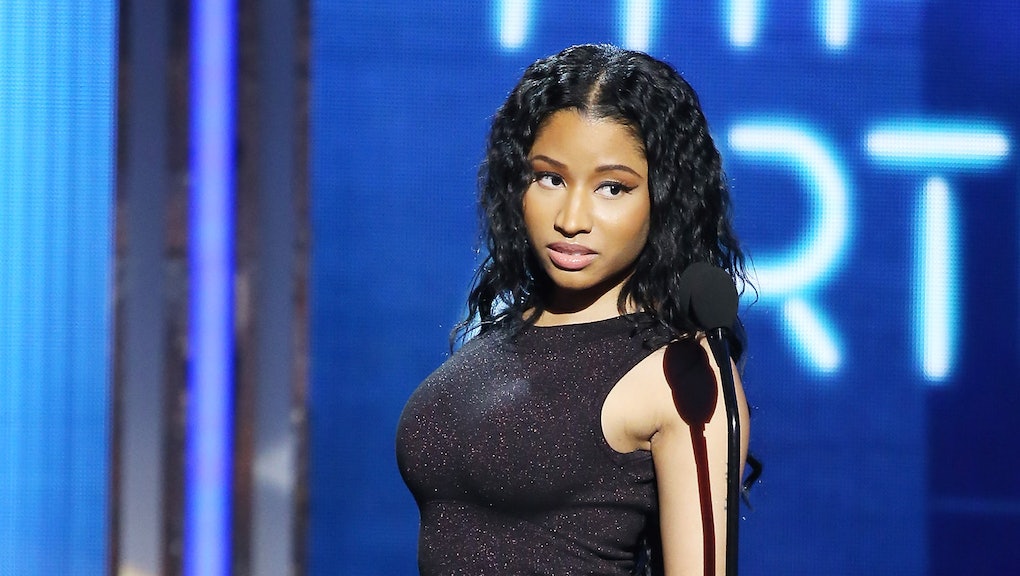 At the BET Awards on Sunday, rapper Nicki Minaj had a lot to be thankful for. She was awarded Best Female Hip-Hop Artist, one of the most coveted awards, for the fifth year in a row. But after her speech, the afterglow didn't last very long.

In the days since her win, all anyone in the press has talked about is whether she was "throwing shade" at Iggy Azalea — completely reducing the obvious plea she was making to the industry to take women seriously to a cat fight between successful female performers. Minaj fired back on Wednesday.

In her humble acceptance speech, Minaj revealed she still doesn't take the honor for granted. She made sure to note, "I thank God that I've been placed in a position to do something and represent women in a culture that is so male-driven. ... What I want the world to know about Nicki Minaj is, that when you hear Nicki Minaj spit, Nicki Minaj wrote it."

Many saw this as a dig at Azalea, whose hit "Fancy" was rumored to have been written by rapper T.I. But on Wednesday, Minaj made it clear that she was talking about something much bigger:

Minaj stood up to all the reductive press attention to remind everyone why women are under such great pressure to do everything on their own: Everyone assumes they can't. She alluded to that in another part of her speech that nobody is talking about: Minaj said she's so afraid of letting the media characterize her as a "weak" woman that she recently chose not to call an ambulance even though she was so sick she feared she was about to die.

In order to be seen as "flawless" and "fierce," women would consider dying over being a target of the paparazzi. And that, unfortunately, is a problem that goes far beyond rap lyrics.

It's one Minaj will have to keep fighting, too. At the time of publication, the hashtag #nippletrinity was trending on Twitter — a joke term made up to lump Rihanna, Beyoncé and Minaj together based on recent nipple-sightings. In a world where three brilliantly creative women can be joined under one hashtag about their breasts and openly mocked, we need rappers like Minaj who won't let anyone speak for them.