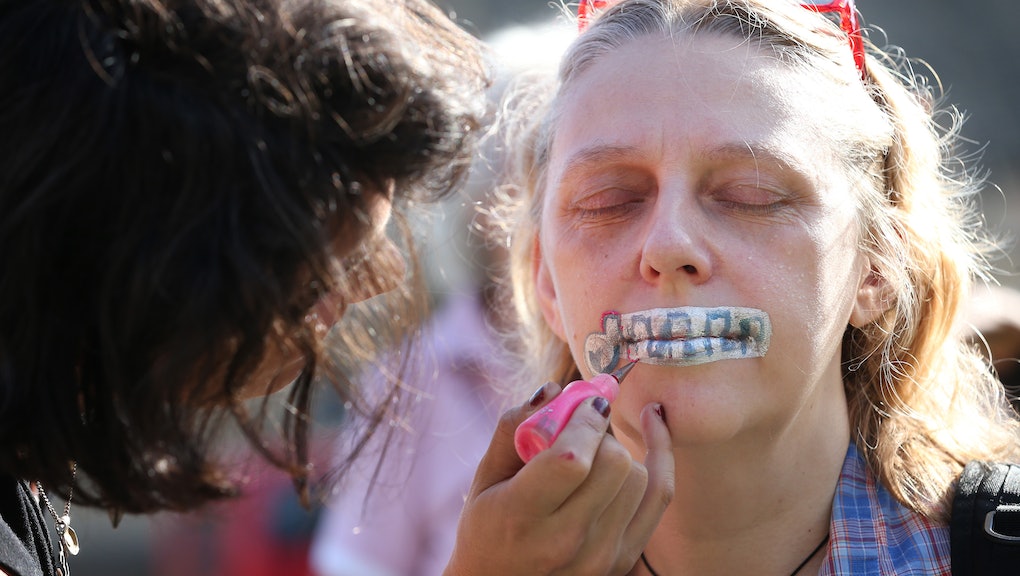 A free speech crackdown in modern day America: We expect to hear stories on repressing freedom of speech in countries like Russia, not in the U.S. But right here in the land of the free, American universities, the pillars of protest movements and open dialogue, are suppressing free speech.

In response, the first-ever coordinated legal battle against U.S. universities was filed on Tuesday in four states as part of the "Stand Up for Speech" litigation project. Three-fifths of public colleges violate the First Amendment by imposing free speech policies on their campuses.

American universities are banning things like "inconsiderate jokes, inappropriately directed laughter" and student protests against NSA spying, echoing (if accidentally) Russian President Vladimir Putin's recent restrictions on free speech in Russia. The colleges corral "free speech activities" to small areas designated as free speech zones. Many universities do this because they believe that their campuses have the right to not be offensive.

University speech codes by the numbers: Both private and public higher education institutions have speech codes in place. According to the Foundation for Individual Rights in Education (FIRE), out of 427 schools surveyed in 2013, 186 public and 64 private institutions have policies that restrict freedoms of speech.

FIRE found that 58.6% of schools impede basic rights, while 35.6% were flagged for overregulating speech on campus.

Case by case: In 1989, a federal court case, Doe v. Michigan, proved that college campus speech codes violate the First Amendment. All legal battles since that decision have consistently ruled against colleges and in favor of free speech on campuses.

But despite the two dozen court cases filed over the years, there are still barriers to publicly voicing opinions on some campuses, and this new litigation brings that to the surface.

The four cases: The "Stand Up for Speech" litigation project began in 2013 after a student at Modesto Junior College in Modesto, Calif., was told that he couldn't pass out copies of the U.S. Constitution on Constitution Day.

Three students in three different states, along with two faculty members in another, are challenging their respective college administrations' speech code policies. The complaints were filed after such actions as a student group's T-shirt promoting the legalization of marijuana to shutting down a blog that alleged misconduct within the college administration. Not all the cases seem so clear-cut: One suit is also fighting to let a campus student group use a slogan that some say objectifies women and promotes prostitution. But freedom of speech has nothing to do with whether one agrees with that speech, only that it may not be curtailed by the government, and the institutions in question are all publicly funded.

FIRE has more lawsuits in the works, and intends to file more in the future. The company's president, Greg Lukianoff, said, "Freedom of speech, like all liberties, only survives when people like these brave students are willing to stand up for their rights — to stand up for speech." We shouldn't have to fight these battles at all, but if they were going to start anywhere, it's fitting that they should start at schools.