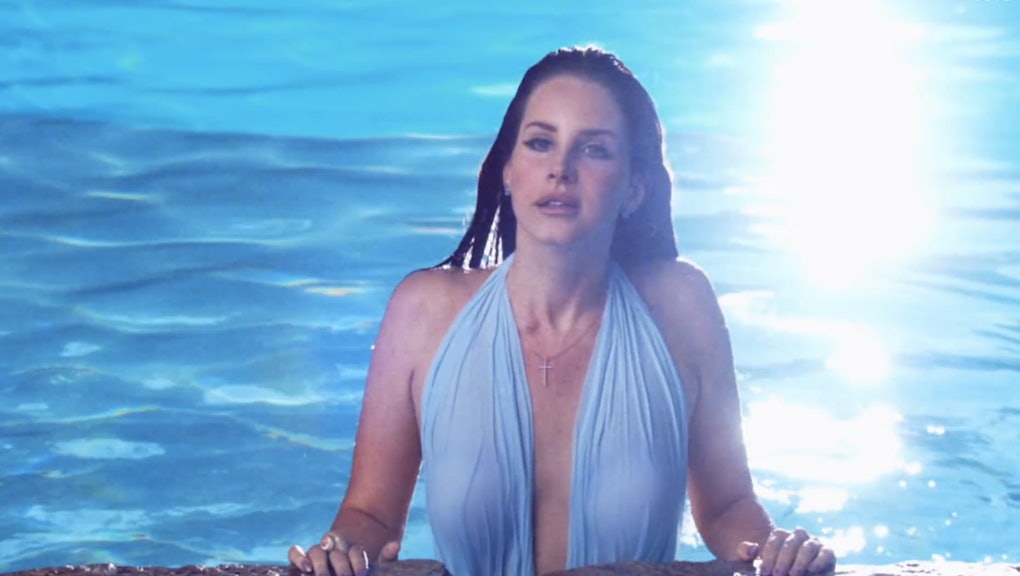 The past few years have brought a host of empowered female pop stars and a new flurry of discussion regarding feminism. It's about owning your sexuality. It's about taking power. It's about freedom. It's about Lilith Fair or riot grrrl. It's about Madonna. Actually, it's about Nicki Minaj. No, wait, it's about Miley Cyrus — or Beyoncé. OK, OK, maybe it's actually about all of those things.

Conspicuously absent from this list, though, is the most talked about woman in music right now: Lana Del Rey, whose new album Ultraviolence hit No. 1 on the Billboard charts as soon as it was released. She wants nothing to do with any of this discussion. A few weeks ago, she proclaimed in an interview with FADER, "The issue of feminism is just not an interesting concept."

Her appeal depends on her willingness to disregard feminism completely. She plays a character who smells like French perfume and lusts after "dope and diamonds." Her music hints at abusive relationships, at death, at drug abuse, but never comes close to offering a nuanced discussion on those topics. She sits around listlessly, waiting for her man to call (and when he does, she'll quickly answer, as she points out on the track "Old Money" — "But if you send for me / You know I'll come"). She romanticizes everything modern women have fought not to be.

With that sentiment, Del Rey has basically ensured that the word "feminism" will haunt her wherever she goes. But anybody looking for her to use her star power for equal rights will find something pretty disturbing: Del Rey's music and image seriously romanticize an era in which women were systematically degraded.

Her video for "National Anthem" makes that pretty clear. In the film, she plays Marilyn Monroe and then Jackie Kennedy — two women who have nothing to do with each other except for their status as 1960s damsels in distress, hung-up and done in by the same mega-powerful man. That's the kind of thing Del Rey celebrates — a dramatic and troubled movie star in the thrall of a powerful man and then dead by overdose.

Sure, Del Rey owns her sexuality at times, but even then she plays right into the gendered dynamic that has existed pretty much forever. And she hardly offers a nuanced perspective on it. On "Fucked My Way Up to the Top," Del Rey throws a punchy title onto a song — yet another one about powerful men and the women who need them — that withers down into the same old dependency line: "Need you, baby / Like I breathe you, baby." That's at the core of almost all her songs.

So what's wrong with that? Lorde put it pretty eloquently when she discussed this line of thinking: "[It's] so unhealthy for young girls to be listening to, you know: 'I'm nothing without you.' This sort of shirt-tugging, desperate, don't leave me stuff. That's not a good thing for young girls, even young people, to hear."

But still, it's somewhat unfair to pin all of this on Del Rey — after all, no one paid Lizzy Grant much attention until she tried on the glamorized, old Hollywood Del Rey costume, so we're all partially to blame for encouraging her to play up that character.

And, as Ann Friedman puts it, "The 'Are you a feminist?' test is most often administered to young, female celebrities who have dared to challenge stereotypes or allude to their beliefs in gender equality." Asking Del Rey, or any young female celebrity, about their feminist politics is a trap that puts them between the "feminist police" and the fearmongers who task themselves with sniffing out radicalism, Friedman says.

But Del Rey at least owes her fans some sort of sensitivity around topics like domestic violence. On the title track off Ultraviolence, she sings the title from the Crystals' "He Hit Me (And It Felt Like a Kiss)." It's not the first time she's romanticized domestic violence, either.

When Del Rey was confronted with the question about why she's always being choked in her videos, she simply responded, "I like a little hardcore love." She made no real discussion of attempting to represent women who are living out these scenarios in their daily lives — and when you sell this many records, at least a few of your fans are probably experiencing those problems — or any attempt to bring a bigger discussion about domestic abuse to the forefront with her music.

Sometimes it's reductive to force the question of feminism on a pop star, but in Del Rey's case it needs to happen — we should be thinking hard about why she (and consumers of her music) are so keen for her quivering lips and the battered damsel-in-distress act. Maybe she'll even come to question why people paid more attention to her once she began presenting herself as a retro goddess. But she probably won't — that's a big part of what has helped her sell records.

The real question, then, might be: Why are we buying them?