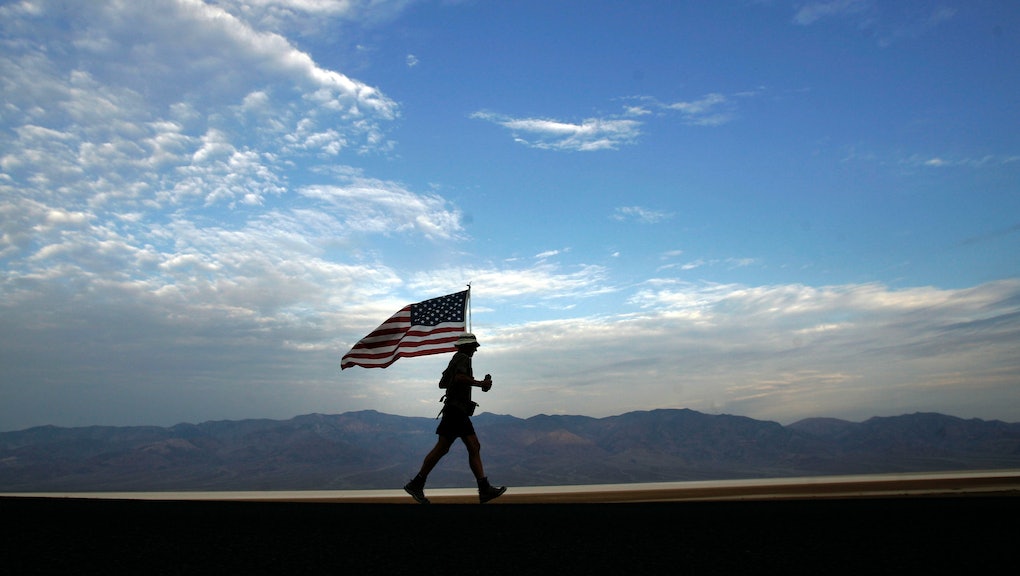 The 12 Most Insane Endurance Races on the Planet

With the Tour de France getting underway on Saturday, Americans now have another international sport to divert their attention from the World Cup. The 21-stage, 2,276-mile competition is an incredible exhibition of human potential, but there are many other lesser-known feats of endurance just as worthy of appreciation.

Here are a dozen of the most boundary-stretching, envelope-pushing competitions in the world today.

The Race Across America lives up to its name, covering 3,000 miles from coast to coast — from Oceanside, Calif., to Annapolis, Md. Unlike the Tour de France, this race is not run in stages but clocked from start to finish. First one across the line wins.

At 135 miles, the Badwater Ultramarathon is not exactly your average marathon. This non-stop race in the middle of July features two grueling uphill stretches, one of which is 23 miles continuously uphill that ends up being more than 6,000 feet in vertical climb.

There's the extreme heat and then there's extreme cold — the Antarctic Ice Marathon race begins in November only a few hundred miles from the South Pole in the Ellsworth Mountains. As if running on ice weren't hard enough, the average windchill is minus-20 degrees Celsius, or minus-4 degrees Fahrenheit.

When the Discovery Channel dubs a race the toughest footrace on Earth, you should take notice. Spanning up to 156 miles depending on the course, the Marathon des Sables route is planned meticulously months in advance and is not shared with the competitors until race day. That's a lot of work for a six-day jaunt through the Sahara Desert.

This race warrants inclusion on the bucket list female runners. The Pikes Peak Marathon was the first to have a female finisher, Arlene Pieper, in 1959. The third oldest marathon in the United States, the course travels as high as 14,115 feet above sea level and runners climb a total of 7,815 feet.

With 350- and 1,000-mile options, the Iditarod Trail Invitational is capped at 50 competitors. Starting the week before the world-famous sled dog race, there's quite the list of prerequisites that a perspective racer must accomplish before hoping for one of the few available spaces. No winter experience? The organizers offer a few training sessions to see whether runners can handle the conditions and physical toll.

A secretive competition, the Barkley Marathons cover more than 100 miles and nearly 60,000 feet in cumulative elevation, the equivalent of climbing Mount Everest twice. Runners only get 60 hours to complete the unmarked journey without the use of GPS or other electronic devices. Only 12 of the just over 800 entrants have successfully completed the journey.

Covering 100 miles and reaching as high as the ruins of Machu Picchu, the Chasqui Challenge is not only a physical challenge, but a logistical one. Runners pay upward of $3,000 for their entries into the exclusive trek and spaces sell out routinely five or six months in advance — all to run through the Andes Mountains to cover the equivalent of four marathons.

Imagine a twisted amalgamation of the Warrior Dash, Tough Mudder and every frightening episode of the Amazing Race all rolled into one unimaginably difficult challenge: the Death Race. Taking place in the Green Mountains in Vermont, the events typically take competitors upward of 70 hours to complete. Challenges during the race have included hiking 30 miles while carrying heavy rocks and chopping wood for two hours straight for physical punishment while other stages have including memorizing the names of U.S presidents and Bible verse for recitation after climbing to the top of one of the mountains peak in the area.

Sure, the Tour de France is tough. But how about a bike race through the Himalayan Mountains? Meet the Yak Attack. Climbing as high as 17,769 feet, riders travel for three days through the hot deserts at the base of the mountains and then must cross the Thorong La Pass, exposing riders to equally brutal snow and cold. At $3,750, the race is out of reach for most, especially since that cost does not include travel to the race location.

Most people want to travel from London to Paris, but not very often in this fashion: 87 miles from the Marble Arch in Lond to the coastline in Dover, a swim across the English Channel to Calais, then 181 miles on a bike to the Arc de Triomphe. There may be few more grueling ways to do some sightseeing in two of the world's most famous cities.