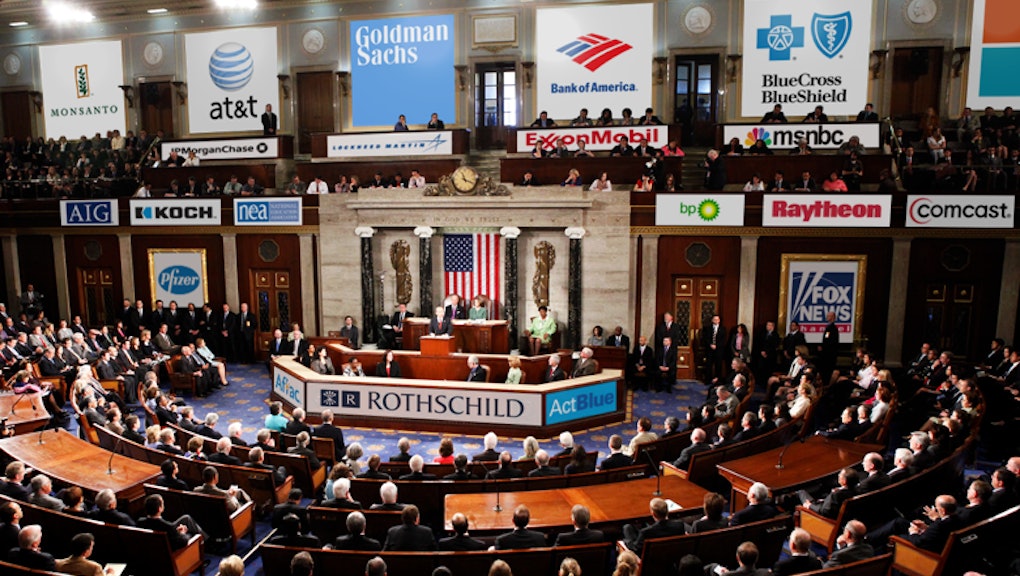 The news: What would Congress look like if it was adorned with the banners of sponsors, like a NASCAR rally? The image above from the Questionist gives us a visual hint.

The background: In reality, the truth about our government isn't so far off. David Johnston of Reuters has some eye-opening statistics. For example, some of the biggest corporations in America spend more on lobbying than they do on federal income taxes, including GE, Verizon, Boeing, Honeywell and Wells Fargo. From 2008 to 2010, 30 brand-name companies spent less than 6.7% on income taxes, compared to the going corporate rate of 35%. Another report from Public Campaign shows that 29 of those same companies spent nearly half a billion dollars in those three years lobbying for laws and rules that favor them. That's a staggering amount of money.

More recently, the most conservative Supreme Court in decades has issued a string of rulings expanding the concept of corporate personhood (albeit in very different ways).

Another study by Princeton and Northwestern researchers found that the government responds to the demands of major lobbying and business groups far more than it does public opinions, strongly suggesting that American democracy increasingly resembles an oligarchy. In the past few decades, the increasing amount of wealth controlled by the ultra-wealthy and major corporations has further damaged the holdings of the nation's middle and lower classes. Economists Thomas Piketty and Emmanuel Saez constructed income statistics based on IRS data that go back to 1913. Their results, mapped by these graphs from the Center on Budget and Policy Priorities, show that the rich have been doing far better than the rest of us since around 1973:

Piketty and Saez also calculated that as of September 2013, the top 1% of earners had captured 95% of all income gains since the Great Recession ended. The other 99% saw a net 12% drop to their income.

Since the Citizens United decisions accelerated the process, independent campaign expenditures have been exploding on both the left and right. This graph from the Center for Responsive Politics shows how quickly spending has shot up:

Why you should care: At the same time that the rich have been getting richer proportionate to the rest of us, the New York Times' James Kwak writes that "our elected leaders are increasingly dependent on a small number of seven-digit checks written by a few dozen members of the 0.01 percent, and therefore politics are becoming a type of thoroughbred horse racing." The kind of policies that the "horse owners" prefer, though, aren't necessarily those that average Americans prefer.