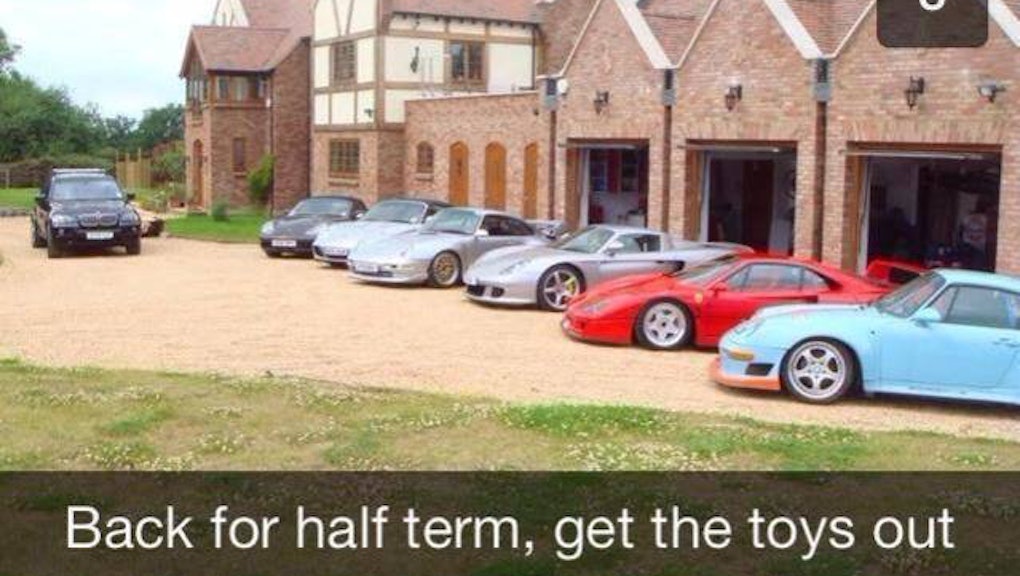 These Are the Rich Kids of Snapchat, and Their Photos Are Insane

"Guess I need a new Lambo." "Just got my new Rolex, thanks dad." "Where's the maid when you need her?"

For a peek into the fantasy world of riches, privilege and British slang, look no further than the "richkidsnaps" Snapchat account and the associated Facebook community, "What Happens at Private School Goes On Snapchat," which has more than 248,000 likes. Here, users submit snaps of their obscene wealth while expressing distaste for "chavs," which those of us in the U.S. may need Wikipedia's help to understand.

Images: What Happens at Private School Goes On Snapchat/Facebook

While some posts are clearly tongue-in-cheek, others veer into more disgusting territory, making fun of the less wealthy and in some cases jokingly referencing literal class warfare.

Images: What Happens at Private School Goes On Snapchat/Facebook

Apologies: After the page started to gain attention for the obnoxious (at best) nature of many of the posts, the moderator posted an apology of sorts, noting that the Facebook photos were user submitted and not his or her thoughts:

"It is important to note that I would never, ever, judge someone based on their wealth. I created this page for entertainment purposes only. I meant no offence [sic] whatsoever. The Facebook page and my snapchat are completely different things. My snapchat's sole purpose is to inspire other young people to go out and achieve what they want to achieve. I show my extreme lifestyle so that people can see that even me: someone who isn't especially intelligent, and started with only £500 (when I was 12, I am now 17) is able to achieve great things.I am deeply sorry to anyone who takes offence from this whole thing. That was not my intention."

The moderator also spoke with BuzzFeed, noting how much money he or she gives to charity:

"Understandably it upsets people that I am spending money on unnecessary things, and more importantly bragging about it. A lot of people tell me I could be giving to charity instead. I completely understand that it upsets people. However I donate over 80% of my income to charity. In fact my bank automatically sends 80% of any payment going into my account directly to my charity holding account, which then gets distributed to around 100 charities of my choose at the end of every month. On top of this, I donate generously to various charity events."

Not alone: The Rich Private School Kids page is certainly not the only place you can gaze upon the world of the wealthy with more outrage than jealousy. Rich Kids of Instagram compiles the social media brags of, well, rich kids, though the effect is often more eyeroll-inducing than horrifying.

Humanitarians of Tinder takes a similar concept in the opposite direction, highlighting the penchant of some users of the popular dating app to pose with children in developing countries. Sensitive and worldly!

So, rich British teens, take it easy on Snapchat. It's alright to send each other pictures of your cars, and maybe even some self-aware jokes about your status in life. When you're referencing killing "peasants" (or anybody really), you're going too far — and probably deserve a lot worse than detention.