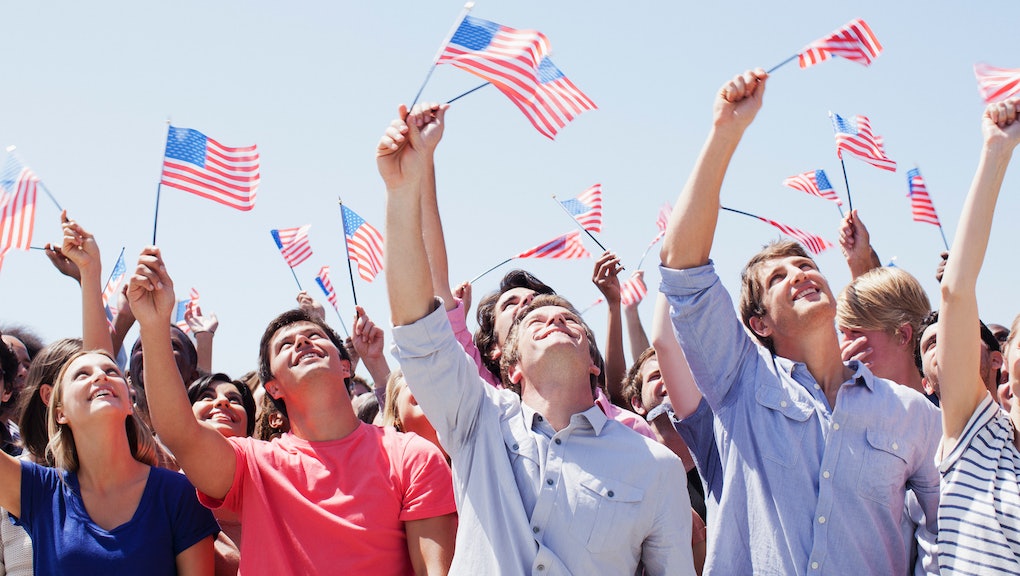 One Meme Shows the Complicated New Patriotism of Our Generation

The fireworks are ready and the grills are smoking as another year of Fourth of July celebrations commemorates the anniversary of America's independence. For many, it's a sobering and joyous reminder of the country's values of freedom, loyalty and undying patriotism.

But, according to new research, young people have become much more critical, and a bit less reverential of their country than any other generation that's come before them — and they show it with a simple, but satirical meme that makes light of the "God, mom and apple pie" trope of unquestioning nationalism: #Merica.

In a new study commissioned by MTV Networks, 60% of Millennials say the hashtag best characterizes how they feel about their country: immensely proud, but critical and hyper-aware of its flaws. Many of the #Merica memes poke fun at the idea of American exceptionalism, and much of the cutural and iconic imagery commonly used to promote the idea that the United States is the free world's preeminent source of goodness.

The collection of #Merica images across Vine, Tumblr and Twitter take a comedic twist on national identity, and feature an over-glorification of country music, over-consumption of food and alcohol, pick-up trucks and of course, anything red, white and blue.

During a series of surveys and interviews, an overwhelming 86% of Millennials say they are proud to be an American, even though eight out of 10 say that U.S. actions at home and abroad complicate their sentiments. The survey, conducted earlier this year, reinforces findings from the Pew Research Center's March 2014 report, "Millennials in Adulthood," which show that roughly half of young people would describe themselves as "patriotic." That's compared to 64% of their parents' generation, and 75% of their grandparents'.

The numbers show that as generational transitions occur in America, the country's national identity may be moving away from the exceptionalist "city on a hill" view that is often exhorted during various political statements. General expressions of gratitude for the many liberties afforded by virtue of being a United States citizen are also sentiments less popular among youth.

In fact, more young people than ever before would describe themselves as "global citizens," based on MTV's research: 60% to be exact. That's a 20-point jump from what Baby Boomers said in the same survey and interviews.

And, probably not surprisingly, Millennial worldviews tend to be a lot more progressive when compared to previous generations. Virtually all Millennials who participated in the study agreed that all Americans deserve equal opportunity to higher education, access to affordable healthcare and public transportation and the right to have free, nationwide Internet access.

So here's to #Merica: Land of the free, home of the brave and a rejuvenated melting pot of young citizens who feel more connected to the global issues of inequality than ever before.