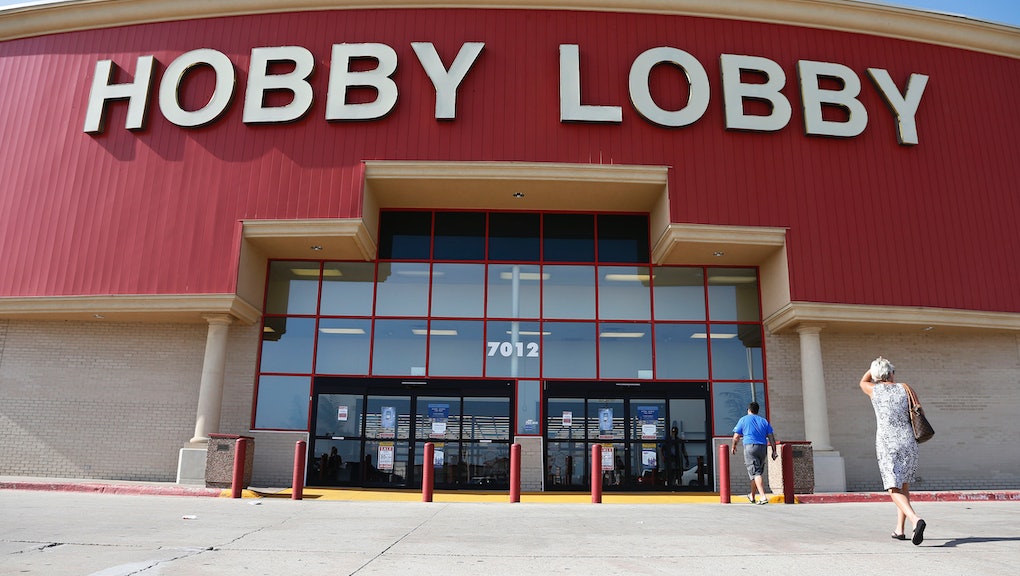 The news: In a 5-4 decision on Monday, the Supreme Court ruled that Hobby Lobby was free to deny female contraceptive coverage as part of its required benefits under the Affordable Care Act. It was a victory for conservative Christians opposed to birth control who claimed providing the medication would infringe on the religious beliefs of the company's founders. But even some clergy were against the Supreme Court's decision in the Hobby Lobby lawsuit, criticizing the outcome for infringing upon the rights of women.

Clergy from the United Church of Christ (UCC) and the Unitarian Universalist Association (UUA) as well as Planned Parenthood personnel handed out condoms at an Illinois Hobby Lobby location. The point, members of the protest said, was to spread their belief that Hobby Lobby's exemption was hypocritical because the chain would continue to freely provide male birth control under its company health plan.

UUA Rev. Emmy Lou Belcher told the Daily Herald that "I'm just hoping that (people who see the demonstration) realize that this opinion (of Hobby Lobby’s owners) is not the opinion of religious people as a broad spectrum, but that religious people have many different opinions."

The background: The UCC is typically viewed as one of the most liberal Christian denominations in America, while the UUA accepts members of all faiths and beliefs including atheists. Other liberal-minded theologians have weighed in as well.

"Hobby Lobby would have us believe that corporations, too, have souls," said Union Theological Seminary President Serene Jones "This is not the case. I am horrified by the thought that the owners of Hobby Lobby as Christians think their corporation has a soul, and I'm even more appalled that the Supreme Court agrees."

As Think Progress has noted, both the Jewish Social Policy Action Network and the American Jewish Committee also oppose the decision, as well as evangelical Christians like Rev. Richard Cizik and Religion News Service blogger Jonathan Merritt. It's not clear whether other religions would be on board with this ruling, either. Justice Ruth Bader Ginsburg's dissent asked:

"Would the exemption…extend to employers with religiously grounded objections to blood transfusions (Jehovah's Witnesses); antidepressants (Scientologists); medications derived from pigs, including anesthesia, intravenous fluids, and pills coated with gelatin (certain Muslims, Jews, and Hindus); and vaccinations[?] … Not much help there for the lower courts bound by today's decision ... Approving some religious claims while deeming others unworthy of accommodation could be 'perceived as favoring one religion over another,' the very 'risk the [Constitution's] Establishment Clause was designed to preclude."

Why you should care: Hobby Lobby wants you to believe this win is a plus for religious freedom. But it's really mostly a victory for a narrowly determined set of religious beliefs that happen to be evangelical Christian ones. In what could be an omen for what's to come, religious leaders are already petitioning Obama for a religious exemption to upcoming anti-discrimination rules about LGBT people.