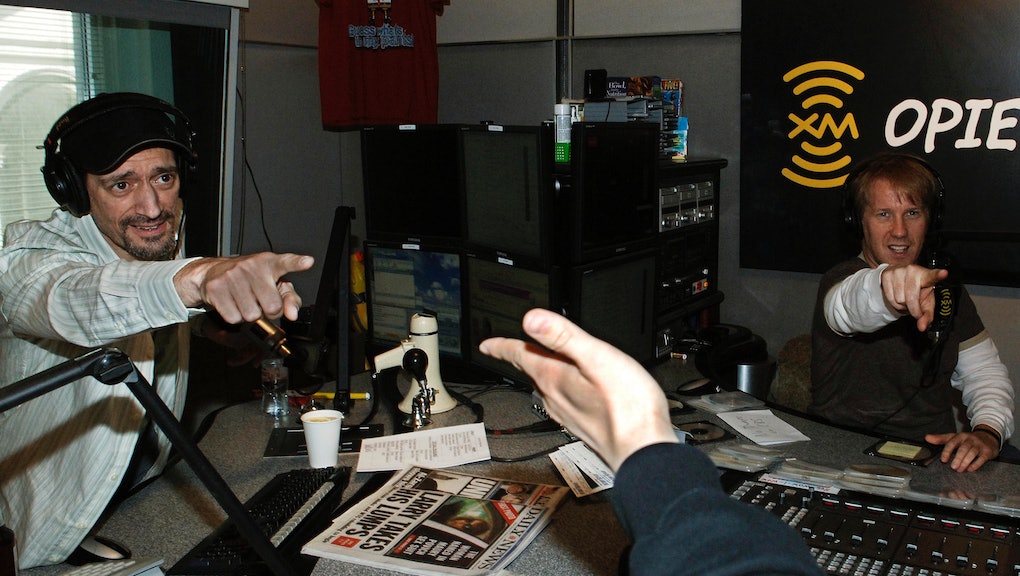 The news: Anthony Cumia, the latter half of popular radio show Opie and Anthony, was fired by SiriusXM Thursday after an unhinged racist Twitter rant.

Cumia took to Twitter accusing a black woman in New York City of punching him multiple times after he took a picture with her in the frame. He went on to call her a "savage violent animal" (among many other terrible things) and noted multiple times that he hopes she is murdered. Cumia claimed he was attacked because he is white, blamed black people for being "violent" and later straight up said, "They aren't people."

See the full rant here (it's gone from Twitter), if you can stomach it:

As the rant unravels, you can see Cumia grapple with how to reconcile his description of how violent the "assault" was (a punch followed by five more punches turns into 10 punches, along with an eye injury) with his own tortured masculinity ("I blocked most of her punches w/my arms. No biggie"). He says he was carrying a gun and all but pats himself on the back for not killing her in the middle of Times Square.

The reaction: The show has been running in some form or another since 1995; Gregg "Opie" Hughes has yet to comment, though the pair have stuck together through plenty of past controversies, so it's unclear if he will take on the show himself for the remainder of his contract with SiriusXM.

The company said in a statement:

"SiriusXM has terminated its relationship with Anthony Cumia of the Opie & Anthony channel. The decision was made, and Cumia informed, late Thursday, July 3 after careful consideration of his racially-charged and hate-filled remarks on social media. Those remarks and postings are abhorrent to SiriusXM, and his behavior is wholly inconsistent with what SiriusXM represents."

Cumia responded by tweeting, "Sirius decided to cave and fire me. Welcome to bizarro world. Fired for shit that wasn't even on the air & wasn't illegal. So, who's next?"

Earlier controversies: The Opie and Anthony Show has run into trouble for its subject matter in the past. The pair were suspended for a month from XM in 2007 after they chatted with a guest named "Homeless Charlie" about raping Condoleezza Rice and then-First Lady Laura Bush.

This also isn't the first time Cumia has addressed race with his trademark nuance and thoughtfulness. But this latest rant is just another look into the psyche of a man who thinks that he should be able to keep his job no matter what he does ... as long as it's not literally illegal.