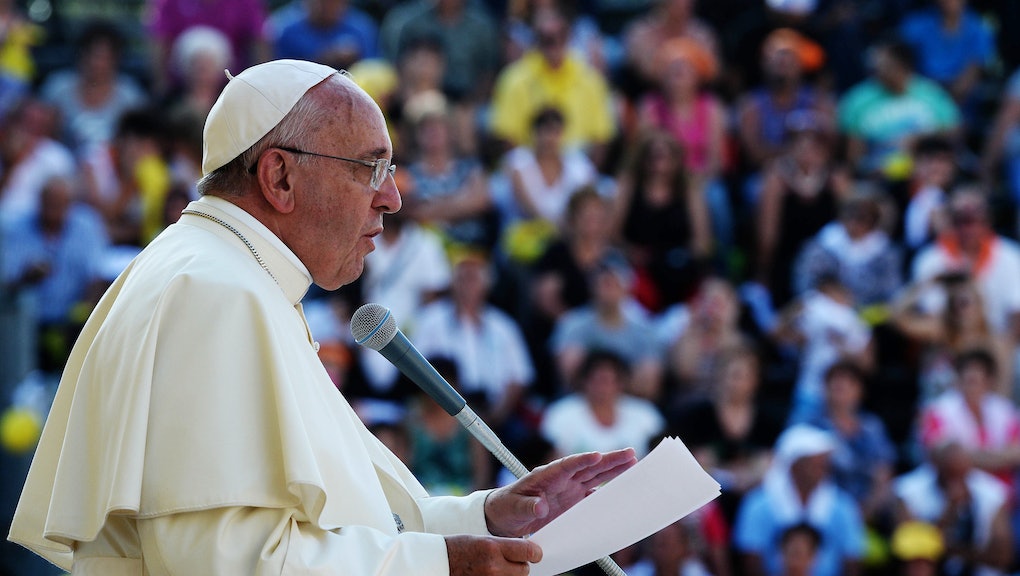 The news: Since Francis' papacy began last February, he's vowed to fix the Catholic Church's ongoing issues with sexual abuse. And while critics argue he's been relatively quiet on the issue, on Monday Pope Francis will be taking an important step towards addressing the issue: meeting with survivors of sexual abuse by Catholic priests.

Six survivors from Britain, Germany and Ireland will say mass with the pope at his personal chapel and enjoy a private audience with him afterwards. This will be Francis' first meeting with sexual abuse victims. His predecessors, Benedict XVI and John Paul II, did so several times but failed to make any real progress on the problem. But with a so far progressive track record, Francis may have an easier time effecting real change on this terrible problem.

The pope is renewing efforts to address the scandal. Monday's encounter will follow the meeting of the pope's special international commission to advise him on the issue and develop plans to address the problems. In May, Francis also announced that three bishops were under investigation, although he didn't clarify whether they were accused of abuse or for covering up other priests' crimes.

And in April, the pope personally asked for forgiveness on behalf of the Catholic Church. "The church is aware of this damage, it is personal, moral damage carried out by men of the church, and we will not take one step backward with regards to how we will deal with this problem, and the sanctions that must be imposed," he said at the time. "On the contrary, we have to be even stronger. Because you cannot interfere with children."

But there's still a lot to be done. According to Vatican officials, the church's prosecutors handled 3,420 abuse cases over the past decade. Only 848 priests were defrocked, and 2,572 were ordered to "live a life of prayer or penance" in isolated conditions, such as monasteries.

But some believe these measures were far too lenient, and they're not letting Francis off the hook. Even the pope's planned meeting with sexual abuse survivors has been criticized by some groups as being "meaningless."

"The simple truth is this is another gesture, another public relations coup, another nice bit of symbolism that will leave no child better off and bring no real reform to a continuing, scandal-ridden church hierarchy," David Clohessy, executive director of the U.S.-based group Survivors Network of Those Abused by Priests, told the AP.