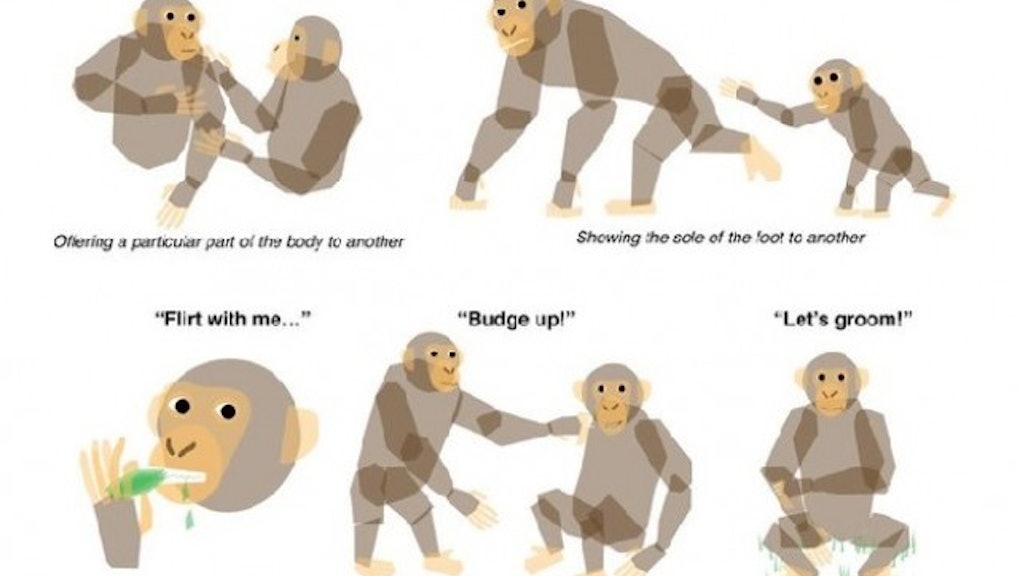 Scientists Have Translated Chimpanzee Language — Here's What They're Saying

The news: Quick, somebody call Jane Goodall and tell her she can take a break — we've finally figured out how to communicate with chimpanzees.

A revolutionary new study published by the journal Current Biology offer a "lexicon" of chimp gestures and insight into the complex dynamics that shape chimp societies. The study was conducted by researchers from University of St. Andrews in Scotland who analyzed roughly 4,500 interactions among chimps within the Sonso community in the Ugandan rainforest.

"The big message [from this study] is that there is another species out there that is meaningful in its communication, so that's not unique to humans," lead researcher Catherine Hobaiter told BBC News. "That's what's so amazing about chimp gestures. They're the only thing that looks like human language in that respect."

Here are some "words" that the researchers discovered:

And that's not all. A similar study, also published in the same issue of Current Biology, was conducted by researchers at Switzerland's University of Neuchâtel, analyzing bonobo behavior. The team studied bonobo gestures and was able to discern which motions were acts of sexual solicitation and which were the most successful.

While their findings were not as extensive as that of the University of St. Andrews study, they did reach an important conclusion: Complex communication may be a trait that is unique and inherent among primates.

"The ability to produce gestures that depict some spatial features of a desired action was therefore probably already present in the common ancestor of humans and apes," the researchers wrote in their findings.

While we may still be a few years away from full Planet of the Apes-style communication with our primate cousins, that future still remains a real possibility.