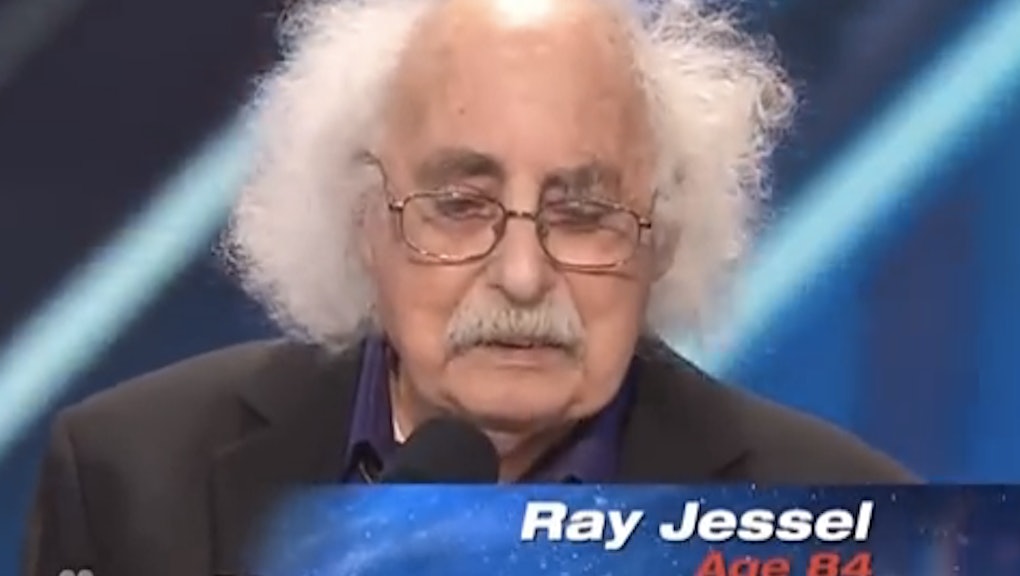 Did NBC's America's Got Talent just present us with the new RuPaul's Drag Race "tranny" moment of 2014?

On last week's episode, the network aired 84-year-old Ray Jessel's performance of the "funny" original song, "What She's Got — The Penis Song." Performed in a style not unlike throwback vaudeville, Jessel elicited waves of appreciative laughter from both the audience members and judges for the short number:

While not exactly subtle, the the lyrics describe an adorable old man as he meets this fantastic girl with "pizazz" and so much more. The punchline? The woman has a penis. Is Jessel describing a transgender woman? It's never explained. But what is clear is that the discovery of this offending item turns Jessel off, even though he had been previously singing his beautiful date's praises.

As is clear from the video, the judges found the song hilarious. Shock jock Howard Stern called Jessel a breath of fresh air as he and the other three judges quickly voted the man into the next round of the competition.

"We need more laughter," Jessel said, in response to the judges questioning about the song.

But some people, including trans-activist Kat Haché didn't find the song to be funny, telling the Advocate that this song is the kind of cultural expression that enables violence against the trans community:

"Like a lot of transphobic humor in our culture, the message is that the mere existence of transpeople is something worth laughing at, when the lived reality of being a transperson is often a reality shaped by violence from daily microaggressions and negations of our identities to larger acts of overt physical violence against transpeople.

Haché went on to explain how the song played into an age-old stereotype of the transgender community sometimes known as the "trickster myth," in which transwomen are perceived as liars, looking to deceive dates and conceal their true — in other words, undesirable — secret. "Songs like this both reinforce the idea that transwomen deceive others by expressing themselves as they want to be perceived and keep transwomen from ever feeling safe enough to actually start transitioning, as those who do are painted as objects of ridicule and deceptive," she noted.

One could quibble with Haché's assessment since Jessel never explicitly says he finds this woman to be "shameful" or "disgusting" or "wrong." But he does imply that the addition of a penis is a "flaw." In a post calling on NBC to take action, LGBT activist group GLAAD noted that, "Regardless of how charming the performer was himself, the song's premise is emblematic of the fact that transgender people, and transgender women, in particular, are still seen as perfectly acceptable targets for outright mockery. A similar song where the humorous "reveal" hinged on someone's race or religion probably wouldn't have made it to air, much less won the performer a spot in the next round."

While there is no evidence to suggest Jessel's intent was to denigrate transgender women specifically, the wording of the song perpetuates a culture that does so. The fact that no one — not Nick Cannon, not Howard Stern, not Heidi Klum — appeared to have any indication that this hilarious ditty might offend a community of Americans is perhaps the most problematic aspect of the whole thing. Assuming Jessel was ignorant of his song's potentially-offensive undertones, the performance could have been a nice teaching moment for the millions of Americans watching on television, had any of the adults present realized what was going on.

Interestingly, NBC has since removed the video from the series' official social media channels. Did the network have a change of heart, or simply receive too much heat? Either way, it's a (small) sign of progress.