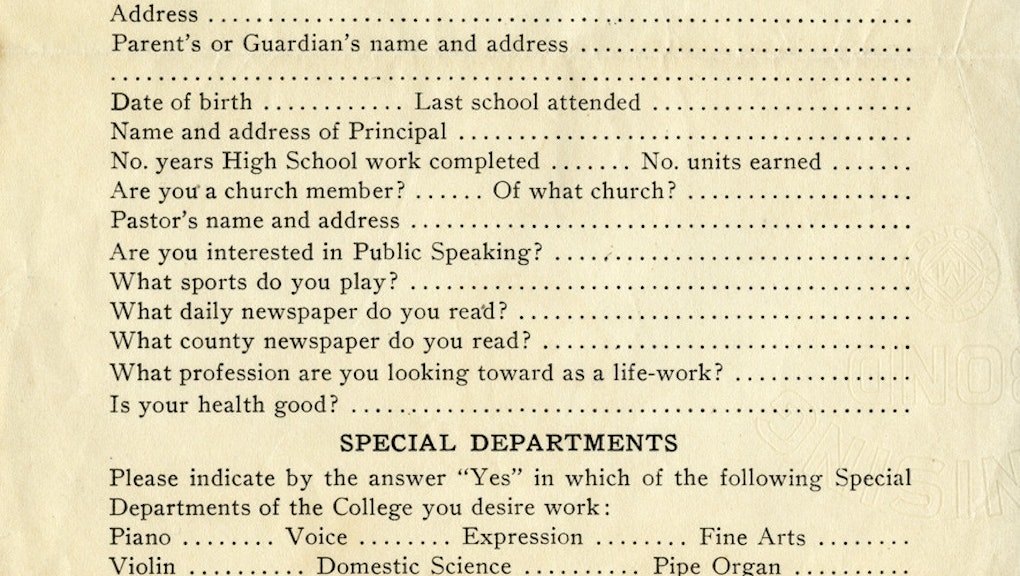 One single-sided page. That's how long the college application used to be for Elon University, then Elon College, a private liberal arts school in North Carolina.

The document, dated 1922, was uploaded to Reddit and comes from the collections of Elon's Belk Library.

There's no mention of SAT scores, no GPA requirements and no essay asking which person, dead or alive, applicants would want to take out to lunch. The application only asks for a $5 deposit (about $70 today) to reserve a room and offers a refund if the applicant isn't accepted or decides not to attend. Instead of medical and immunization records, it simply asks, "Is your health good?"

Now, it's another world. The average college application is five pages long. And the Common Application, which allows students to apply to multiple schools with one form, requires five essays of no more than 650 words each.

And the price? Way more than $5 per application. It costs $90, for example, to apply to Stanford and $80 for the University of Southern California — but those fees are non-refundable and just for the paper application itself.

According to the National Association for College Admission Counseling, the average student applies to nine schools. This means even if each of those nine schools has an application fee of $37.88 — the national average — students will still end up spending nearly $350. And that's just pennies compared to the astronomical tuition costs student will fork over during their college careers.

Just a few simple questions won't cover all these applicants. Even in 1937, a full 15 years after Elon's one-page application, only 15% of 18- to 20-year-olds attended college. Now, of the 16- to 24-year-olds who graduated high school between January 2013 and October 2013, a full 65.9% were enrolled in college in October, according to the Bureau of Labor Statistics.

Not only are more people applying (and enrolling), but acceptance rates are declining, particularly among elite schools.

Monthly paychecks began to change, too. Between 1960 and 1980, national college enrollment more than tripled. Wages began to change as well; in the '80s, highly educated people's earnings rose dramatically compared to those less educated.

The same is true today. According to Pew research, "[o]n virtually every measure of economic well-being and career attainment … young college graduates are outperforming their peers with less education." Despite the Steve Jobses and Bill Gateses of the world, it's still extremely difficult to get a high-paying job without a degree.

Others, however, disagree. "We have too few college graduates," MIT economist David Autor told the New York Times. "We also have too few people who are prepared for college." It's a simple idea: If there were an overabundance of college graduates, the wage gap between college grads and non-grads would equalize. However, the pay gap has actually increased, suggesting there aren't enough grads.

What does all of this mean for the future of the college admissions process? It's safe to say we probably won't revert back to Elon University's one-page application. But it does mean that the college landscape in America is changing, particularly given the rising costs of education.

Schools themselves are shifting their metrics: tougher application essays, less emphasis on class rank and more attention paid to a high school student's senior year. The dreaded SATs have also changed their ways, and have reverted back to a 1,600-point system while dropping the essay. Rather than deal with regular-style essays at all, Bard College in Annandale-on-Hudson, N.Y., simply asks applicants to submit four college-caliber essays on the topics of their choice.

Given that the U.S. ranks only 14th in the world in 25- to 34-year-olds with higher education, it's time for some changes, and the aforementioned ones are a good start. If higher education really is the pathway to success, we can't afford to let it fall apart.