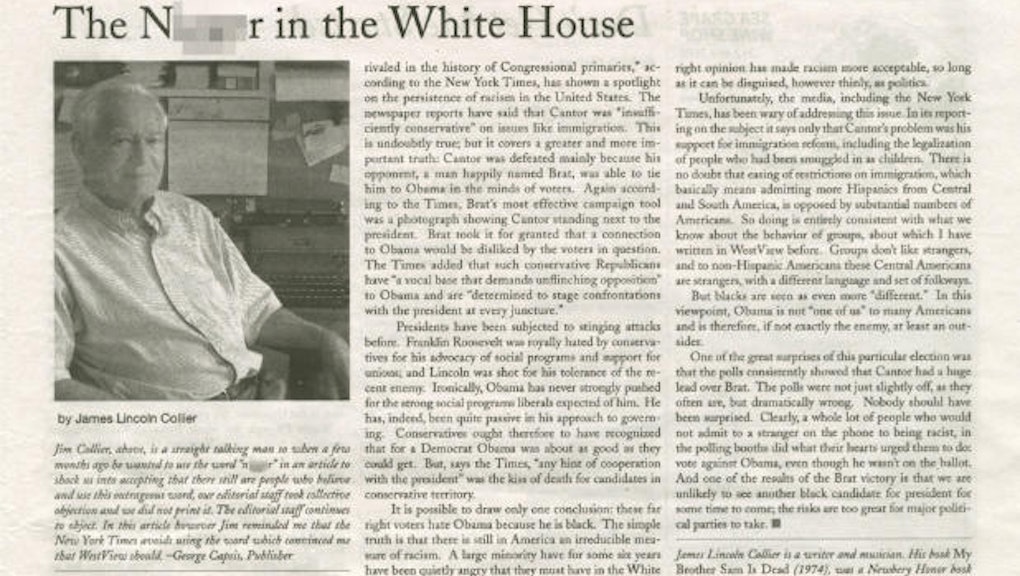 The news: For future reference, here’s how not to write a headline about the president of the United States:

According to the New York Post, an op-ed titled “The Nigger in the White House” ran on page 15 of the WestView News on Sunday.

The community newspaper is distributed throughout New York City’s West Village, Greenwich Village and Chelsea neighborhoods, which are among the city’s whitest and most politically liberal:

But: Some readers aren’t buying it.

“It’s disrespectful in any context to refer to the president of the United States as the N-word,” West Village resident Eugene May told the Post. “If you were quoting something or referring to the historic context of the word being used, I can understand the justification… [But it] seems he’s just using it for shock value.”

Columnist Alvin Hall also criticized the move in an op-ed directly below Collier’s, writing, “The decision to use the headline feels misguided to me. I don’t see how its use benefits anyone, but I do feel all too clearly how it deeply offends me.”

The problem: "Ironically" using racist language to make a political point is nothing new. John Lennon and Yoko Ono faced criticism for doing so in their 1972 song “Woman Is the Nigger of the World,” and recent conversations around diversity in media have taken a similar turn. Yet whether people are offended by its profanity is one thing. It’s another when white pundits appropriate it to further a political agenda, or ostensibly convey their distance from the racism they’re “condemning.”

How? “Nigger’s” volatility makes it a fraught topic of discussion, and there’s plenty of disagreement around where, if and how it should be used. One thing is certain: Just because Collier wrote it to push an anti-racist agenda doesn’t place him above the actual racism it embodies and expresses. The well-off white liberals of western Manhattan may be in on the joke, but society at large still has to deal with its consequences in very real ways.

Tossing “nigger” around to “shock us” and prove how “outrageous” it is conveniently ignores the many ways it can and does harm actual people.

So: While there are no hard and fast rules dictating the word’s deployment – even among black people – it’s easy to see why a white columnist using it would stir discontentment. It doesn’t help that the WestView News’ readership is so socially, economically and geographically disconnected from the short end of racism’s fallout.