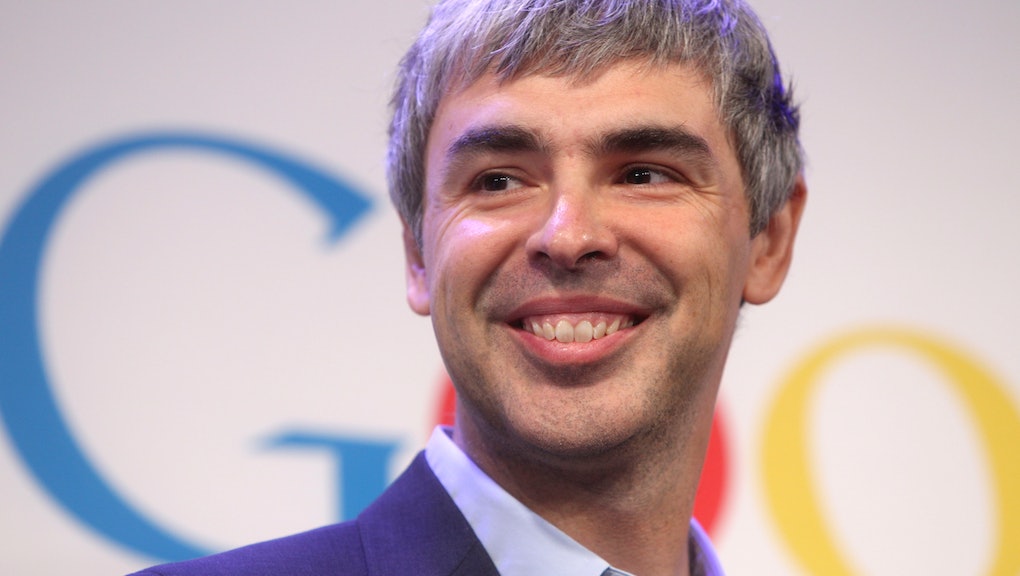 The news: Google co-founder Larry Page thinks that everyone is working too damn much.

In a rare joint interview with co-founder Sergey Brin moderated by tech billionaire Vinod Khosla, Page said that he believes the modern workweek takes up too much of everyone's time.

"The idea that everyone needs to work frantically to meet people's needs is just not true," Page said. According to Page, humankind's basic needs are often quite easy to achieve and switching individuals into part-time jobs would be one way to balance peoples' need to be productive with their desire to work less.

"You just reduce work time. Everyone I've asked — I've asked a lot of people about this," Page explained. "Maybe not you guys, but most people, if I ask them, 'Would you like an extra week of vacation?' They raise their hands, 100% of the people. 'Two weeks of vacation, or a four-day work week?' Everyone will raise their hand. Most people like working, but they'd also like to have more time with their family or to do their own interests. So that would be one way to deal with the problem, is if you had a coordinated way to just reduce the work week. And then, if you had slightly less employment, you can adjust and people will still have jobs."

Page also suggested that instead of working one job full-time, positions could be filled by two part-timers who worked shorter hours.

Could it work? Yes, but it would be very difficult. The theory is that reducing the working hours of employees will give them more leverage with their employers, who could compensate for some of the lost pay. In the ideal scenario, workers would stay on the job for less time but take home more relative money.

Not an entirely new idea: The idea of a shorter workweek has long had appeal. Economist John Maynard Keynes proposed in 1930 that an age of abundance would soon be upon Americans and that three-hour shifts might become common. Americans work some of the longest hours in the developed world (around 1,790 hours a year), hundreds of hours beyond many European countries with more relaxed working environments.

Sara Robinson at Alternet writes that many Americans work 50 hours a week or more. She notes that virtually all research performed on productivity demonstrates that long workweeks burn out workers and are counterproductive in many industries, concluding that "every hour you work over 40 hours a week is making you less effective and productive over both the short and long haul." Mic's Chris Miles sees a clear connection between productivity and working less and suggests that, "The most simple life philosophy — having some you time — could also be the best national economic policy."

The London-based New Economics Foundation advocates for a 21-hour workweek, but they admit that the plan would have to be financed with more progressive taxation (possibly a guaranteed national income?).

Google irony: Forbes' Tim Worstall notes it's pretty amusing that Page is talking about a shorter workweek while Google happily provides perks like in-office dry-cleaning and free food specifically to get employees to stay in the office for long amounts of time. Google itself strives for work-life integration rather than work-life balance, with employees more or less encouraged to "eat, sleep, and breathe Google."

"It is a good example of reinforcing a belief that they haven't worried about paying rent or filling the refrigerator for a long time," Moor Insights & Strategy analyst Patrick Moorhead told Computer World. "This is out of touch with your average Google user and comes off as a bit idealistic."