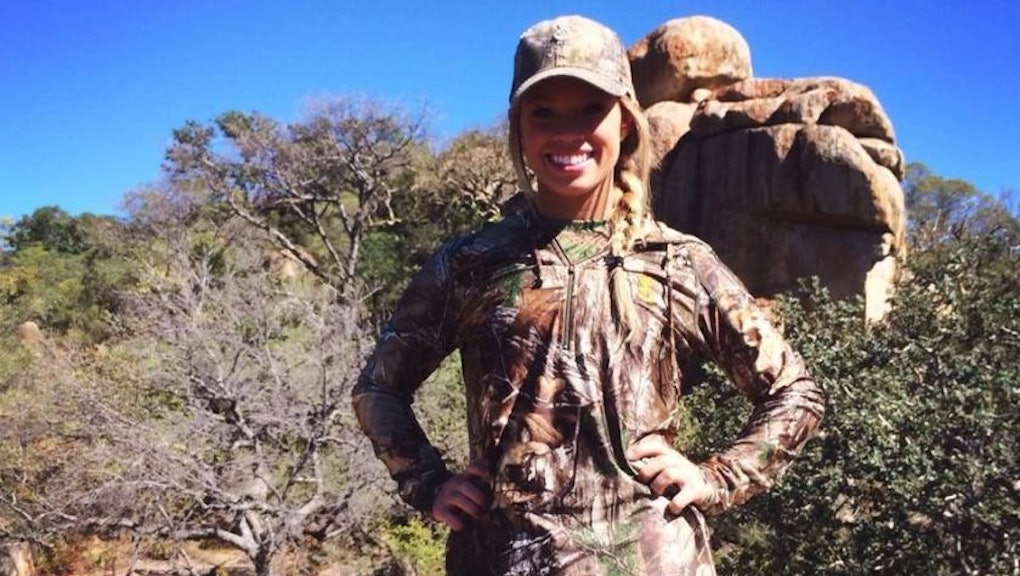 Facebook Deleted This Cheerleader's Profile After a 320,000 Person-Strong Backlash

The news: Facebook has just removed pictures of dead and tranquilized animals from hunting enthusiast Kendall Jones' Facebook page after more than 320,000 people demanded the company take action. Jones attracted widespread criticism after sharing photos of her posing with her "trophies," some of which were endangered species.

A statement from Facebook said that the company removes "reported content that promotes poaching of endangered species, the sale of animals for organized fight or content that includes extreme acts of animal abuse." It's hard to argue that Jones' photos didn't violate the site's terms of use. Here's a small sample:

Is that legal? Jones apparently obtained a rather difficult-to-get (and almost certainly very expensive) permit allowing her to engage in conservation hunting of endangered animals, where the fees paid go to conservation purposes. But even if her hunting was "totally legal," that doesn't necessarily mean it was right to post photos of her gloating over dead animals.

Jones had defended her actions among the backlash by writing on her Facebook page, "[president Theodore Roosevelt] was a hunter too, right? He killed the same species that hunters now chase today under a mound of anti-hunting pressure.

"Yet, how can it be possible that someone can love the earth, and take from the Earth in the name of conservation? For some folks, they'll never understand. For the rest of us ... we were born that way. God Bless Teddy."

Jones doesn't appear to have any presidential aspirations, though she is, "looking to host a TV show in January 2015" about wildlife and hunting.

Just a natural conservationist? Conservation efforts often involve killing animals that pose a threat to the safety of a population in order to promote the species' greater overall health. But recognizing that is different from supporting auctioning off the killing rights to rich foreigners who want to shoot something rare. Another sanctioned trophy hunt of an endangered rhino in 2013 set off a global debate; some African countries like Botswana have banned trophy hunting altogether.

"Couldn't they get $750,000 without having to suffer an animal being shot? Well, yes," conservation group Save the Rhino said in a statement. "It would be nice if donors gave enough money to cover the spiralling costs of protecting rhinos from poachers. Or if enough photographic tourists visited parks and reserves to cover all the costs of community outreach and education programmes. But that just doesn't happen."

So what now? Images of dead animals still proliferate Facebook, with pages like "Under Wild Skies," "The Hunting Report" (since removed) or "Africa Hunting and Animals" (since removed) garnering tons of followers. Facebook didn't go after those pages for a TOS violation, but some of them have since been removed since the Jones controversy started picking up.

While trophy hunting may be distasteful, illegal poaching remains a much greater threat to these animals. The victory against Kendall Jones is a step in the right direction, but it hasn't secured the safety of endangered animals.