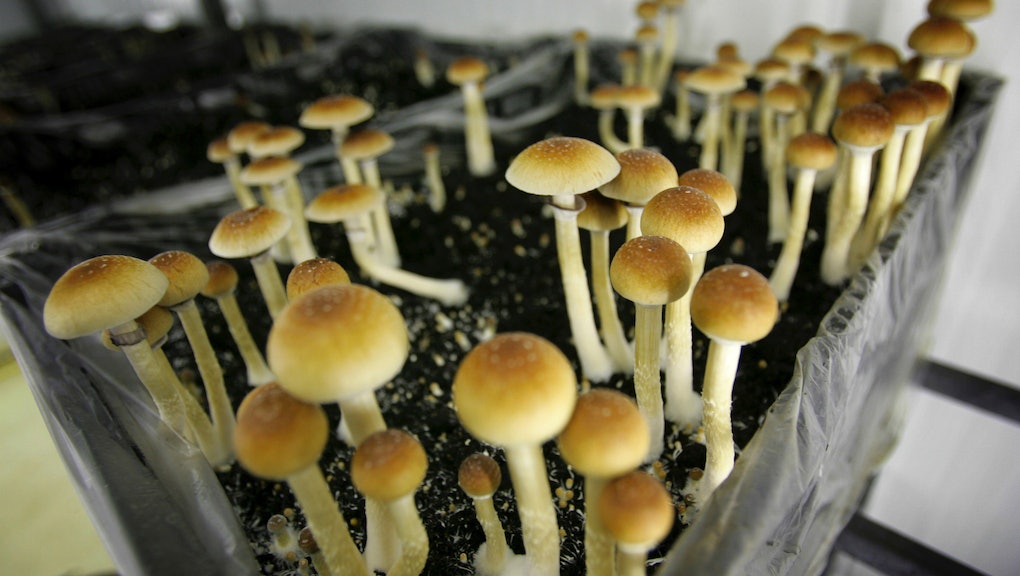 Magic Mushrooms May Actually Be Good for the Human Brain

The news: Magic mushrooms don't just make you see the sound of a distant airplane ripple across your living room wall. They also calm the ego and boost your sense of optimism, according to a new study.

So how does a psychedelic mushroom actually change your brain? It sounds crazy, but shrooms' mind-altering compound (psilocybin) helps unlock mental states that are normally only active when we sleep, inducing a state of wakeful dreaming with which many users should be more than familiar.

The more mind-blowing part, though, is not how the drug amplifies some sections of the brain, but how it mutes others. When the emotional centers of the brain light up with activity, the action in the regions responsible for higher-level thinking and our sense of self, or ego, become hushed.

The drug's long-term effects seem far more pleasant than the terrifying, mind-bending trips that can be brought on by too high a dose.

According to study co-author Robin Carhart-Harris, magic mushrooms "kill the ego," which leads to mind-expanding experiences, like hearing colors, seeing sounds or watching staircases bend. The less focused we are on ourselves, the more open minded we become.

His results were published July 2 in the journal Human Brain Mapping.

The positive effects can linger long after the original use. People dosed with psilocybin in another 2011 study, for example, report being more positive about life, less self-centered and calmer months after taking a dose of the drug.

Rather than dampening emotions, as many current anti-anxiety and anti-depressants do, Cahart-Harris hopes new treatments based on psilocybin's abilities could help people examine their emotions more deeply and change their outlook on life — permanently.

Shrooms are legal in the Netherlands. Image Credit: AP

Carhart-Harris isn't alone: A team of Johns Hopkins researchers found in 2011 that by giving volunteer test subjects just the right dose of psilocybin (not enough to induce a bad trip), they were able to reliably induce out-of-body experiences in 18 volunteers. While the subjects said the experience helped them understand themselves better, their colleagues, friends and family members seemed to agree as well. They said the participants were happier, calmer and more generous than before the experience. Over a year later, 94% of the volunteers said their shroom trip was one of the five most important experiences of their lives.

A 2010 review of the psychiatric research on psilocybin concluded that the risks of therapy were acceptable and that "most subjects described the experience as pleasurable, enriching and non-threatening." And earlier this year, Zürich researchers released a study in which they administered psilocybin to 25 participants. The treatment was found to be associated with an "increase of positive mood in healthy volunteers."

More studies are coming: Only recently has the U.S. government begun to loosen its restrictions on medical uses of mind-altering substances. In 2013, a group of psychiatrists published a letter in the prestigious journal Nature that said government restrictions made researching psychoactive drugs "difficult and in many cases almost impossible." If its findings continue to hold up, this study could prove to be a step in the right direction.