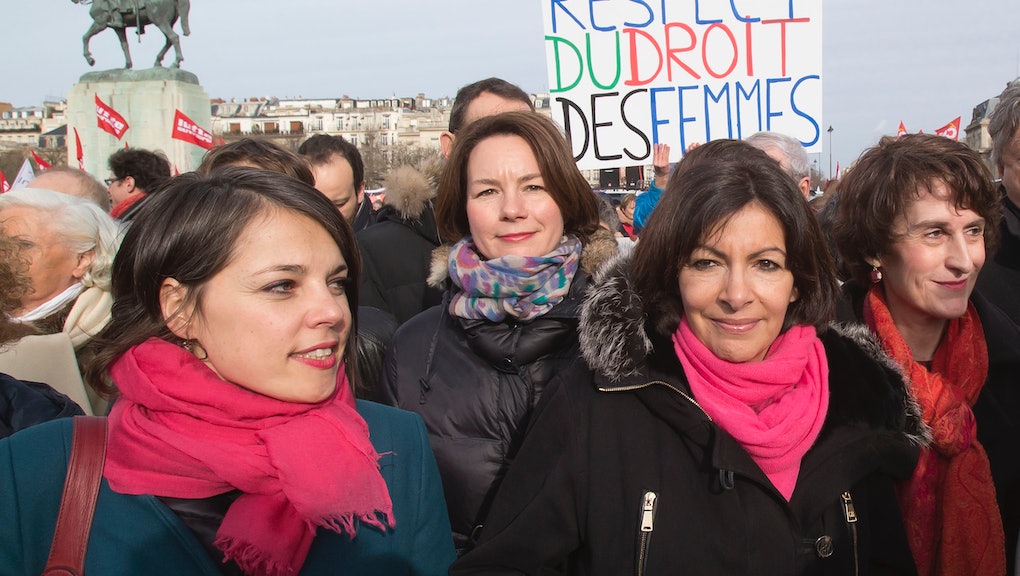 It's a bad time to be living in the United States if you're the owner of a uterus, since the government continues to allow lawmakers to tell women what they can and cannot do with their bodies.

At the end of last month, the Supreme Court voted to exempt Hobby Lobby Inc. from offering free contraceptives on its female employees' health plans. This was in order to appease the corporation's "sincere Christian beliefs" that contraception is a sin against God. Of course, it was noted that Viagra was still covered by the craft store chain's plans. A week later, the Supreme Court broadened contraception exemptions on religious grounds even further.

The legislative door has been opened for people of faith in positions of corporate power to dictate women's reproductive rights. Land of the free, huh?

But it doesn't have to be that way.

France, in all its watered-down socialist glory, takes a very different view on state support of female reproductive health. A pregnancy cannot be terminated after 12 weeks, but state provisions for female contraception are otherwise startling to anyone familiar with the U.S. system.

The French state subsidizes contraception, prenatal care and early child care, meaning a woman's income level does not determine her options. Emergency contraception is available over the counter for less than $20 and free for minors, writes Jill Filipovic for Al Jazeera. Maternity leave is legally available for up to 16 weeks, and child care can cost as little as 50 cents an hour for low-income women.

In contrast, in the U.S., states are introducing longer mandatory wait times before an abortion is performed. Twenty states have laws that exempt insurance from covering abortions. In Texas, it is now illegal to terminate a pregnancy after 20 weeks. There is no federally mandated maternity leave.

This means that it is less complicated and cheaper to both have a baby and not have a baby in France.

Modern medicine allows us to control other naturally occurring medical conditions (yep, like erectile dysfunction), but a woman's biological childbearing ability has somehow become a conversation about faith, not medicine, in the U.S.

And — here's the shocker — this means more American women are dealing with unplanned pregnancies, often with tragic results.

A woman's risk of dying in childbirth is higher in America than it is in almost any other developed nation. In 2006, 49% of pregnancies in the U.S. were unintended in contrast to France's rate of 1 in 5. The U.S. has adolescent pregnancy rates three to four times higher than France does.

France's strict 12-week abortion cut-off can be seen as a nod to their country's vocal Catholic community. Other than that, however, France's state-mandated safety net catches contraception and post-natal care like any other medical condition. It's what made France's health care the best in the world, by several measures, a few years ago.

Even though France's activists are fighting to bring an end to its 12-week cut-off, they at least have the other parts of the picture figured out. By providing affordable contraception, sex education and legislative support for mothers, abortion is one piece of a reproductive health puzzle rather than the perpetual frontline and last resort, as is so frequently the case in America.

The French model might be a distant dream for American women, but at the very least it's time for the U.S. to stop failing women and allowing lawmakers to use the female reproductive system as a religious battleground.