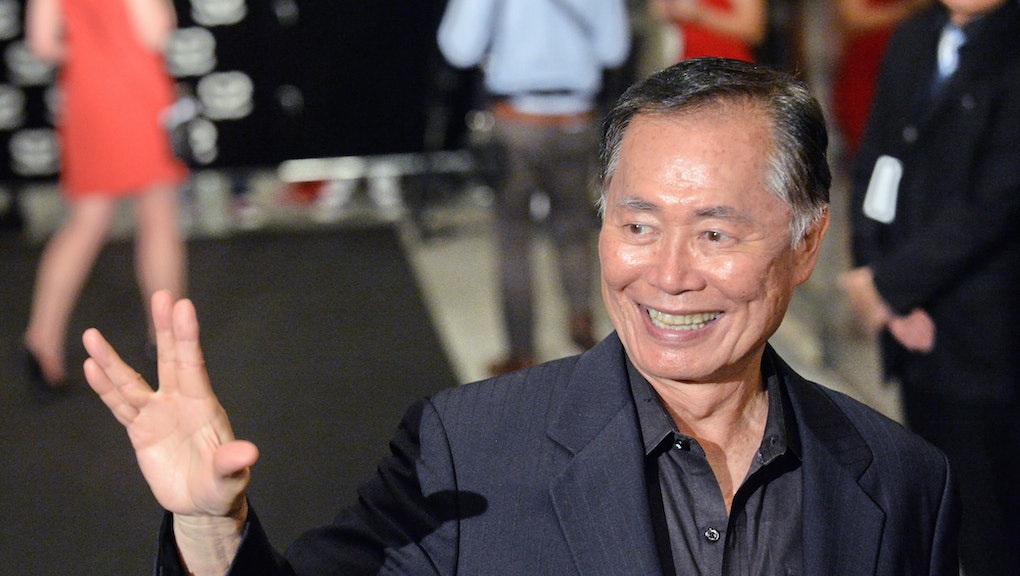 For most people, George Takei is most closely associated with Mr. Sulu from the famous Star Trek series. But the 77-year-old actor has worn many hats since then, especially as an outpoken advocate for the LGBT community and as a human rights activist. In an inspiring and emotional TED Talk he gave last month in Kyoto, Japan, Takei poignantly used his personal story to explain his own complicated, powerful definition of patriotism.

Takei draws strength from one of the darkest chapters of recent American history: the World War II uprooting and incarceration of close to 120,000 Japanese-American men, women and children.

Takei says that the memory of soldiers stomping into his home and throwing him, his siblings and his parents out of it — treatment befitting a criminal, not a U.S. citizen — was something he will never forget. "It is burned into my memory," he said during the presentation.

But rather than remain resentful, Takei turned that pain into a lifelong dedication to serve his country. Despite a childhood in which barbed wire became normal, Takei reveals the way he matured from a confused child to an adult full of pride for his fellow Japanese-Americans and his desire to make America a better nation for all peoples.

Speaking to the TED audience in Kyoto, Takei recounted how he felt as a boy, reading American history books about the ideals of American democracy — life and liberty, equality, the pursuit of happiness — and realizing they didn't seem to match with the reality that he had faced, of being imprisoned without any crime or due process.

Through it all, Takei's father was always proud of the American democracy. He told Takei, "American democracy is vitally dependent on good people who cherish the ideals of our system and actively engage in the process of making our democracy work."

For Takei, that active engagement came from hundreds of Japanese-Americans who threw themselves into fighting for America when Pearl Harbor was bombed, despite being imprisoned by the same country, and who returned home as one of the most decorated army units of World War II, the 442nd Infantry Regimental Combat Team.

"They are my heroes. They clung to their belief in the shining ideals of this country, and they proved that being an American is not just for some people, that race is not how we define being an American," Takei said. "They gave me a legacy, and with that legacy comes a responsibility, and I am dedicated to making my country an even better America, to making our government an even truer democracy, and because of the heroes that I have and the struggles that we've gone through, I can stand before you as a gay Japanese-American, but even more than that, I am a proud American."

Takei has continued in the footsteps of these American heroes, especially in terms of the work he's done on behalf of the LGBT community. A talented comedian, Takei has used his characteristic humor to take on some of the biggest bigots and hypocrites in the country, raising awarness through his 7 million Facebook fans and devoted support base.

In May, Takei's efforts were recognized by a GLAAD Vito Russo Award, which the actor accepted with humor — and a call to action.

"We will make this a better world, a more equal society of all people," Takei said. There's nothing much more American than that.