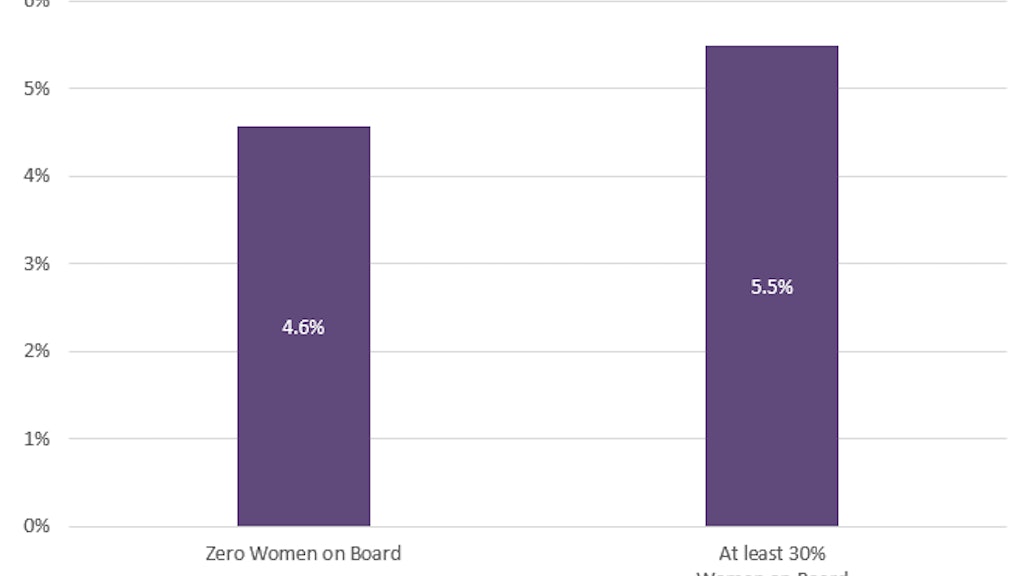 It's no secret that prominent women in business have had a tough start to 2014. Take former executive editor of the New York Times Jill Abramson, for example, who was fired in May after some colleagues described her as "pushy." Or Tinder co-founder Whitney Wolfe, who last week filed a lawsuit against her former employer for sexual harassment and discrimination.

But a look into the boardrooms of America's most profitable companies tells an even more depressing story. Only 16.9% of all Fortune 500 board seats were held by women in 2013, according to research by Catalyst, a nonprofit supporting women in business. Even more shocking is that the following Fortune 500 companies still don't have a single woman on their boards:

How is this still possible in 2014? And, what are the implications of the lack of gender equality in corporate board rooms?

The charts below compare companies that have no women on their boards to those whose boards are comprised of at least 30% women (30% is the minimum standard advocated by the Thirty Percent Coalition, a nonprofit working to increase female representation in business leadership).

The result? Women help create stronger, more resilient companies, but you have to look beyond the company's performance on Wall Street to see this.

Here are the Fortune 500 companies where at least 30% of board seats are held by women:

Companies with at least 30% women on their boards created more job growth on average in 2013 than those with no women.

2. The boards with the most women manage the largest companies.

* We're looking at global numbers here. It's possible that many of these companies cut jobs in the U.S. while adding jobs overseas. Not all companies report U.S. numbers separately from global, so it's difficult to see the picture through a U.S.-lens only.

4. The more women on a board, the less risky a company is.

But a high stock return is certainly not the only thing that matters. If the 2008 global financial crisis taught us anything, it's that risk matters too.

And on this front, it turns out there's a relationship between board gender balance and the amount of risk a company takes on. One measure for risk is volatility, which shows how wildly a stock price changes over time. Companies with no women on their boards exhibit far more stock market volatility compared to companies with at least 30% female board membership. The more women on a company board, the less risky the company is.

The big takeaway: Diverse groups make better decisions than homogenous groups. Gender diversity on boards is important to running healthy companies. Their stock market profits may not be as high, but they arguably create more long-term economic value through job growth while minimizing risk-taking.

Skeptics might argue it's not possible to isolate the effect of women on business performance, because there are several factors that influence these relationships. Women might be more likely to join the boards of companies that are already performing well, for example. But that would be the ultimate vote of confidence in women; preserving a huge, complex, global organization is hardly a trivial thing to do.

For companies to create the greatest value for the greatest number of people, the voices at the top should reflect the diversity of the stakeholders the companies represent. This begins by achieving gender equality in corporate board rooms.