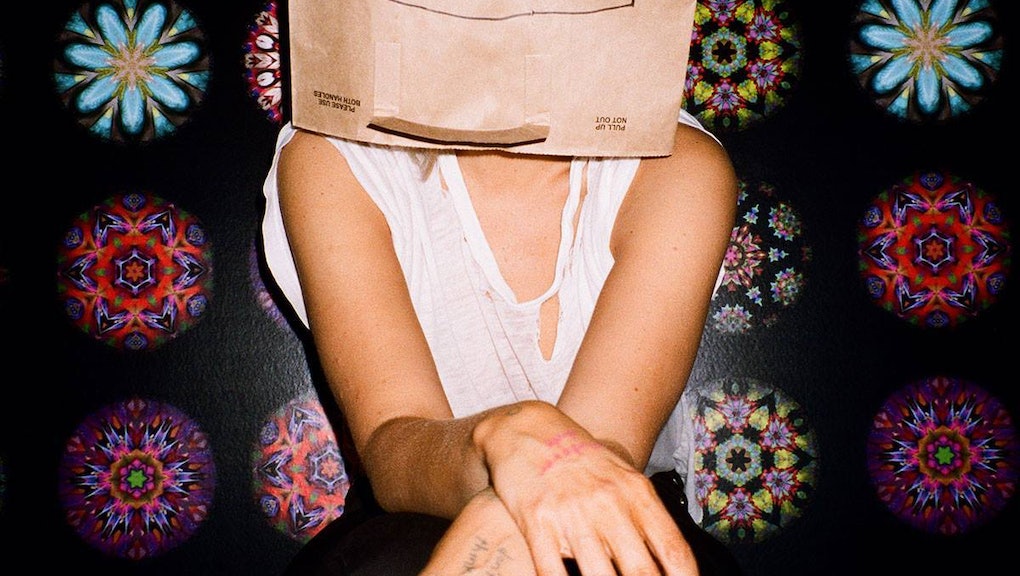 Thirty-eight years old isn't typically when a pop star hits it big. Then again, most pop stars haven't scored tons of hits before anyone knows their name, and most of them don't suffer from massive anxiety. Sia Furler is all of those things — and she's becoming massively famous.

For years, the Australian singer-songwriter has been writing hit after hit for big-name musicians such as Beyoncé (after recording "Pretty Hurts," Bey said she was "a genius"), Katy Perry ("Double Rainbow") and Rihanna (the singer liked how Sia's demo of "Diamonds" sounded so much that she mimicked her vocals exactly). Her own songs, however, have gone commercially unremarked, beloved mainly by the biggest names in pop but largely unknown to the world. Then she released "Chandelier." Fifty million views and one album later, she's one of the biggest names in pop.

She's had a strange path to fame. Writing smash hits for other artists comes bizarrely easily to Furler. She wrote Rihanna's "Diamonds" in 14 minutes. What doesn't come easy, though, is taking the credit.

Sia has been an unknown force in the pop music world, but that's largely by choice. After the DJ David Guetta invited her to write the melody and lyrics for one of his songs, she futzed around on the Internet and pumped out "Titanium" in 40 minutes. (It has since been downloaded more than 3.7 million times.) In fact, Furler intended for the female vocals on "Titanium" to be sung by Mary J. Blige. Guetta stuck with Furler's own demo and released it without her permission. For many musicians who work behind the scenes, this is the kind of big break they pray for (remember when Ke$ha first sang on Flo Rida's "Right Round"?). But for Furler, this was the nightmare she had been trying to avoid.

For years, Sia has been hiding her voice and doing whatever she can to avoid fame. For fear of becoming "tabloid fodder," Furler often refuses to be photographed — on the recent cover of Billboard magazine, she is pictured with a paper bag over her head. She doesn't tour and more generally avoids singing in front of a live audience. If she does, it's with her back to them. During her Ellen appearance, Furler sang facing a corner of the stage, wearing her now-iconic blond wig, while the young Maddie Ziegler reenacted the "Chandelier" music video, in which she also starred. Furler also sang facedown on a bunk bed on Late Night With Seth Meyers while comedian Lena Dunham lip-synched and danced to the song. The cover of her new album, 1,000 Forms of Fear, is just a picture of her empty wig — her own fear, depicted.

It's even ironic to Furler that many regard "Chandelier" as a "be free and live your life" kind of anthem ("I want to swing from the chandelier / From the chandelier"), when in fact it's a song about alcoholism. Furler has been sober for three years and decided that she didn't want to give the song about her struggles to anyone else to sing. As she told NPR, "I wrote the song because there's so many party-girl anthems in pop. And I thought it'd be interesting to do a different take on that." If she was going to be famous for something, it had to be something different.

The song was a hit, like she knew it would be, and now she's been thrust into the spotlight. But Sia's fame is important because she's revealing something very sick about our culture to us all. She wrote a whole manifesto about the horrors of Internet criticism (guilty) for Billboard: Take "the stereotypical highly opinionated, completely uninformed mother-in-law character and apply it to every teenager with a computer in the entire world. Then add in all bored people, as well as people whose job it is to report on celebrities. Then, picture that creature, that force, criticizing you for an hour straight once a day, every day, day after day."

She seems like an anomaly, then, because she wears her anxiety on her sleeve. But if you look at the history of popular music, you'll see that someone like Sia has been behind most pop stars' masks. Michael Jackson's debilitating anxiety and panic attacks, for example, led him to frequently cover his and his childrens' faces with masks; global darling Adele allegedly suffers from anxiety attacks and has thrown up on and offstage; even American singer and actress Barbara Streisand sought therapy and medication to ease her social anxiety disorder.

That means Sia is something few pop stars can afford to be: honest. She's unwilling to yield to the fame game, and in the process she's forcing people to stay focused on what matters — the music of a woman who won't throw her voice any longer.