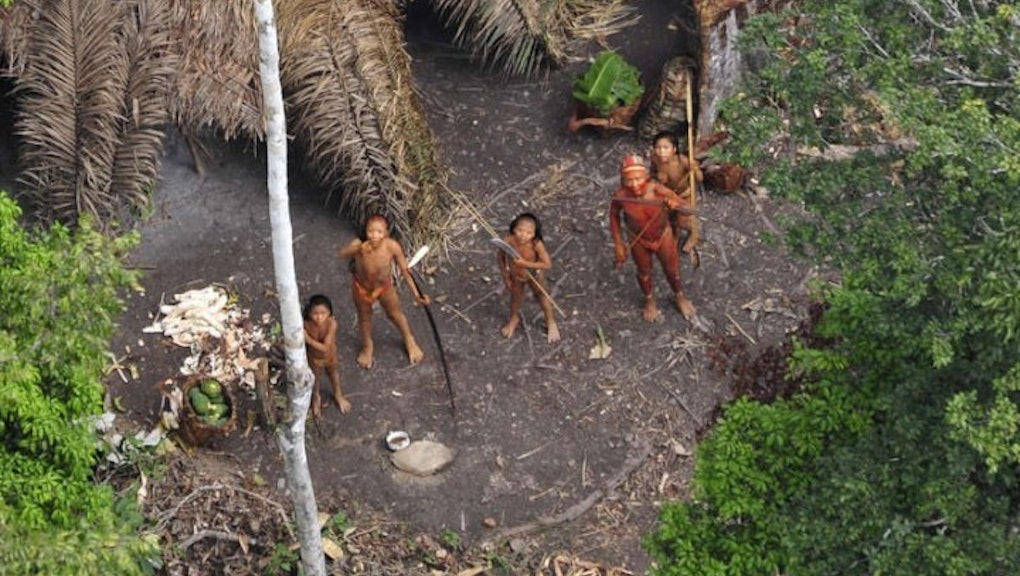 The news: Thought there were no undiscovered tribes left? Think again: Last month, an indigenous Amazonian tribe made contact with civilization for the first time — to save itself.

For weeks, the unidentified tribe — which was previously photographed in 2008 — has been spotted traveling on the border between Brazil and Peru. But the Brazilian government announced last week that the tribe has indeed made peaceful contact with Ashaninka Indians in Brazil's Acre state along the Envira River in order, it appears, to escape illegal logging and drug trafficking in the area.

"Something serious must have happened," José Carlos Meirelles, who monitored the region for 20 years with the Brazilian Indian Affairs Department (FUNAI), said in a statement. "It is not normal for such a large group of uncontacted Indians to approach in this way. This is a completely new and worrying situation, and we currently do not know what has caused it."

The dangers facing the tribe now that they have initiated contact: Beyond the factors that led the remote tribe to escape its region, disease is another significant concern. Because the tribe lacks immunity to common, modern day diseases, a common cold can pose a significant risk. For now, the Brazilian government has dispatched a medical team to the region, but has warned all others to avoid contact.

The other big threat is conflict: While the tribe's members will have the option of settling in a village connected to modern society, it's hard to know if they'll get along with their neighbors. Villagers in the region have recently complained about the tribe's members making off with food and supplies, though that might cease once they are in a stable situation.

The situation has also been further complicated by the inability to directly communicate with the tribe. "We can't be sure how they refer to themselves or even what language they speak," Kayla Wieche, a spokesperson for the NGO Survival International, told International Business Times. "It's difficult to know how many people are in the group in total and how many made contact. One FUNAI [Brazil's National Indian Foundation] official has mentioned a figure of 70, but nobody can really be sure at the moment."

Looking ahead: Right now, the main concerns are maintaining peace in the area and making sure that the tribe's members are safe. "International borders don't exist for uncontacted tribes, which is why Peru and Brazil must work together to prevent lives being lost," Survival International director Stephen Corry said in a statement. "Throughout history, uncontacted peoples have been destroyed when their land is invaded, and so it's vital that these Indians' territory is properly protected. Both governments must act now if their uncontacted citizens are to survive."