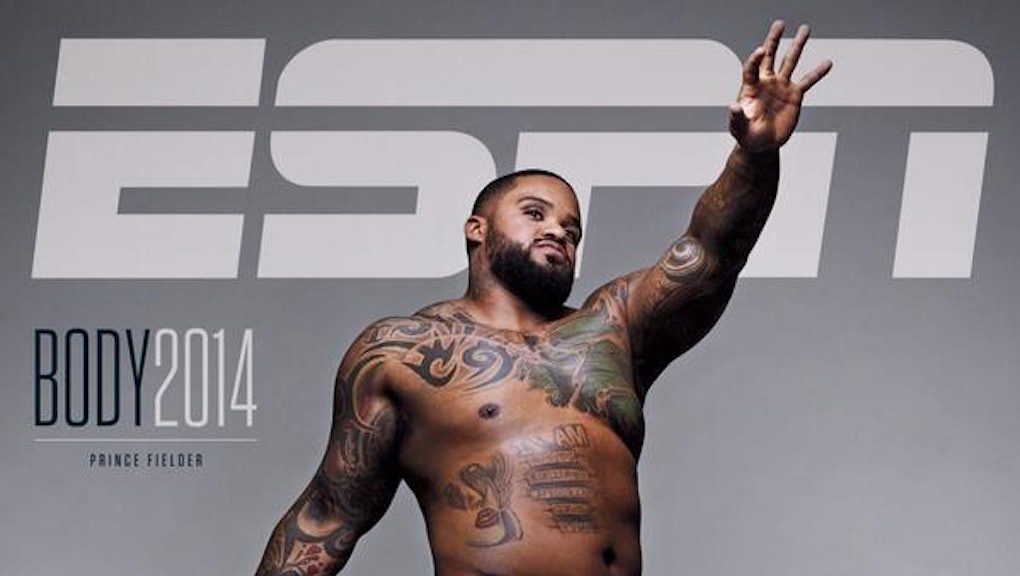 So often when there's a discussion about celebrities' body image in the media, it almost exclusively focuses on women, sometimes at the expense of overlooking men who also face unfair ridicule.

Adding to that critical discussion this week, much of the reaction to ESPN The Magazine's 2014 Body Issue showed that even successful male athletes aren't immune to being criticized for their stature, build and even body fat percentage. Texas Rangers first baseman Prince Fielder is a five-time All Star but that didn't stop the sniping when he boldly exposed his nude physique for one of the covers of ESPN's famous special issue.

"A lot of people think I'm not athletic, or whatever, but I do. Just because you're big doesn't mean you can't be an athlete," Fielder said. "And just because you work out doesn't mean you're going to have a 12-pack. I work out to make sure I can do my job to the best of my ability. Other than that, I'm not going up there trying to be a fitness model."

Predictably, the juvenile mockery of Fielder's body image has already begun online, as the slugger's less-than svelte frame became a target for mockery and, the most millennial of satirical outlets, memes.

But, refreshingly, a different, more positive social media movement has emerged simultaneously, valiantly defending the 275-pound Fielder and others who on a daily basis endure the demeaning and denigrating effects of body shaming. The #HuskyTwitter movement has struck a chord with men thankful that the baseball star is proving that there's a lot to love about the bigger men out there.

Reportedly, the movement all started with one woman's tweet of affirmation, but it quickly morphed into something much bigger.

If there's one lesson to be learned from Prince Fielder's display of savoir faire, both in his revealing words and images, it's that we can all be accountable to each other in celebrating our bodies. And we can do so without shaming others for having bodies different than our own, or different than what mainstream ideals of beauty dictate to us.

ESPN's Body Issue stands in contrast to the blatant imaging of magazines such Sports Illustrated's Swimsuit Edition. With the tagline "bodies we want," ESPN's Body Issue seems to at least be trying to hit a note of aspirational envy, if not empowerment. This contrast should be applauded, as noted by the Washington Post's Soraya Nadia McDonald.

"Particularly with women, the Body Issue has the power to subvert ideas about the way we envision and define femininity, whether it be with boxer Danyelle Wolf's admirably toned biceps or the wiry litheness of cliff diver Ginger Huber," McDonald writes. Fielder's inclusion further proves that you don't have to "look like an Adonis to perform physical feats most of us would find impossible. It's a celebration of the human body and its ability to continually bypass the limitations of our species; a PhD in wearing couture is not a prerequisite for inclusion."

No matter if you're fat, thin, muscular, skinny, husky or anywhere in between, you are beautiful.