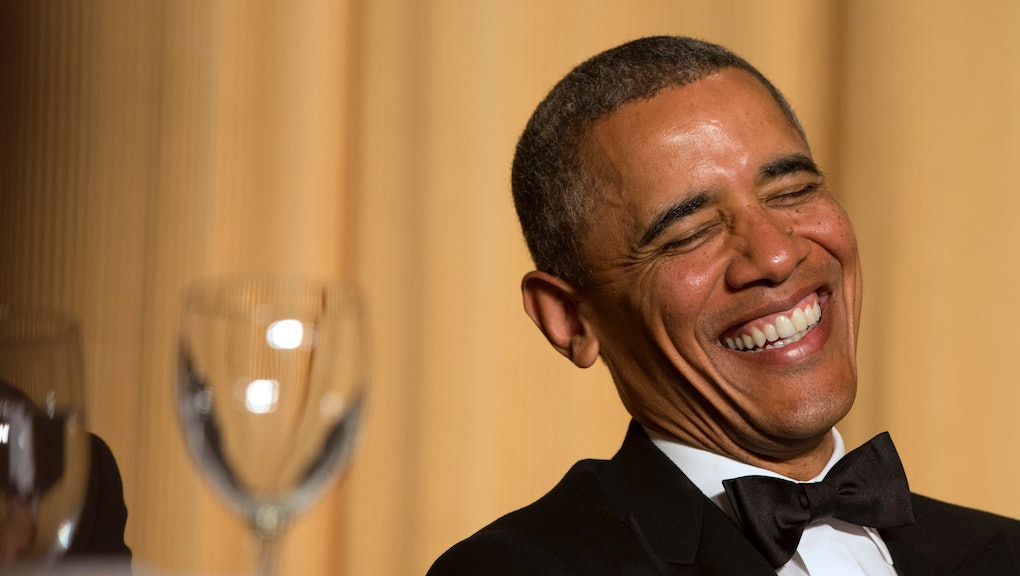 The news: It wouldn't be the first time Barack Obama smoked weed, but sadly it was not to be. While at a Denver bar on Tuesday night, the president met with residents in Colorado — where weed is now totally legal — and one person asked the POTUS if he wanted a hit of something green.

"You wanna hit this?" the guy shouted. The answer was no, but the president just laughed.

The guy even got a shot of Obama's smile after the question:

A couple presidencies ago, and the guy would have been arrested. Boy, are times ever changing.

Obama on weed: The president smoked weed as a teenager, but unlike paternalistic columnist David Brooks has long come to the conclusion that marijuana isn't really that big a deal. In January, he gave the New Yorker this winner of a quote:

"As has been well documented, I smoked pot as a kid, and I view it as a bad habit and a vice, not very different from the cigarettes that I smoked as a young person up through a big chunk of my adult life. I don't think it is more dangerous than alcohol."

Obama officially opposes marijuana legalization. But he has made several progressive moves on marijuana while in office, including announcing his willingness to take weed off the list of the most dangerous (and prohibited) drugs, letting Colorado and Washington state launch their legalization experiments, and getting Eric Holder to reign in the head of the DEA after she tried to continue the agency's hard-line stance on weed. He has also quite reasonably pointed out that middle-class kids don't get in legal trouble for smoking pot, while lower-class kids do.

While we're probably at least a generation away from a president who will "Just Say Yes" when offered a joint, the fact that the POTUS thought being offered a joint was merely kind of funny shows just how shattered the former national consensus on marijuana is.