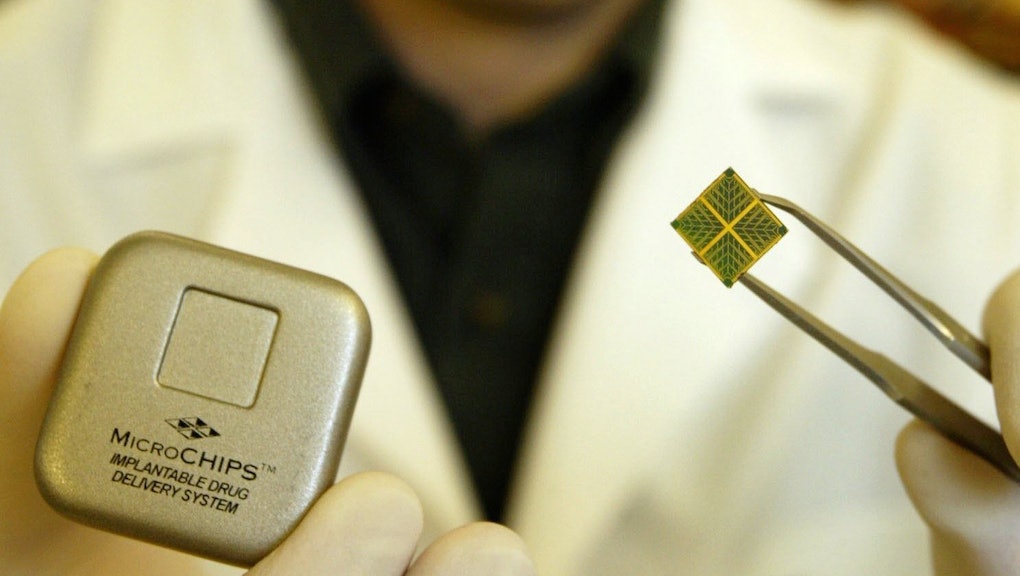 This Is What the Birth Control of the Future Looks Like

You may never have to take another birth control pill again.

The news: Thanks to the Bill and Melinda Gates Foundation, a woman who doesn't want to get pregnant could soon implant a matchstick-sized, wireless chip under her arm, stomach or butt and be "on the pill" for years — 16 years, to be exact.

At the moment, no hormonal birth control exists that lasts for more than five years. Non-hormonal copper IUDs last 12.

Here's how it works: The device dispenses a day's worth of levonorgestrel, the same hormone used in several types of birth control pills, some IUDs and Plan B, via tiny reservoirs inside. The reservoirs open and close using a minuscule electric current from a battery tucked inside the chip. If a woman using the device decides she's ready to get pregnant, all she has to do is flip a tiny switch on a remote control.

Massachusetts-based biotech company MicroCHIPS Inc. is developing the technology, which Bill and Melinda recently backed. MicroCHIPS hopes to introduce its product, still awaiting approval from the Food and Drug Administration before it could be used in the United States, in 2018.

This could be a huge step for women: In the developing world, many don't have easy access to a doctor or contraceptives. Of the nearly 42 million abortions that take place around the world each year, about 20 million are unsafe and virtually all of them occur in low-income countries, according to the Guttmacher Institute. And out of married women aged 15-49, while 72% practice contraception in the U.S., just 28% of women do in Africa.

MicroCHIPS might spell convenience first for some, but it could signal huge public health improvements down the line.