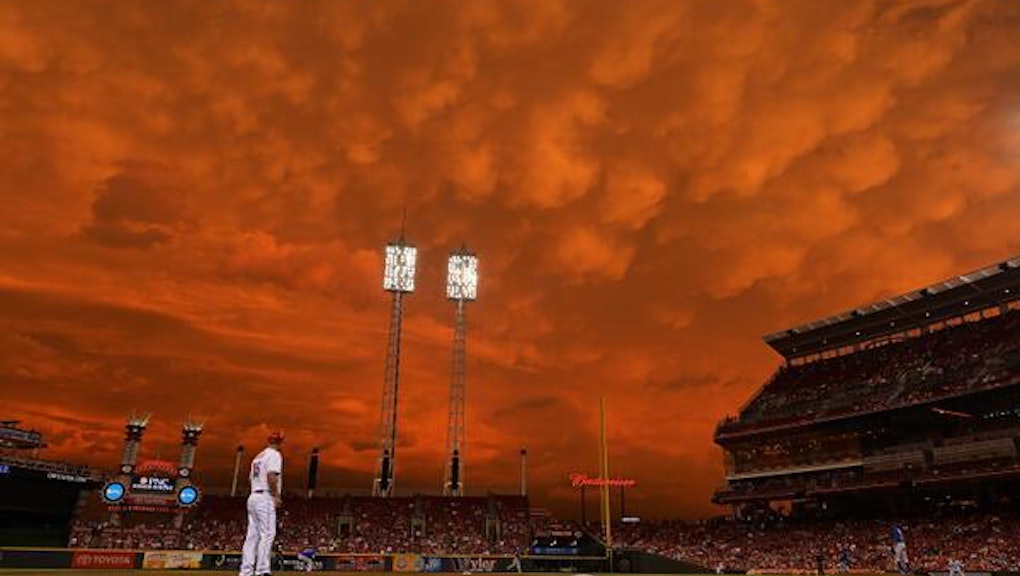 The news: The sky above the Cincinnati Reds' stadium on Monday night looked like it had been lit on fire.

Fans were absolutely amazed with the beauty.

As it turns out, the striking crimson atmosphere can be explained by a relatively simple phenomenon: light pollution.

Thanks to all the lights humans use at night, we've made the night sky far brighter than it was in the pre-Edison days. All those extra street lamps, signs and stadium bulbs scatter their illumination into the atmosphere. If the night is cloudy, as it was on Monday, the blankets of suspended water droplets magnify the glow by reflecting more light back down to Earth. Clouds also change the sky's color. Long-wavelength red light, which normally shoots into space on clear nights, is trapped and sent back by the billows of mist, setting the atmosphere aglow.

The effect is substantial: A team of scientists in Berlin who studied how much clouds can change the sky's tint called their paper Red Is the New Black. (It was only 2012; orange hadn't hit Netflix yet). They found that on cloudy nights, the red portion of skyglow, the official term for this type of light pollution, is a whopping 18 times more intense than it is on clear evenings.

More harmful than a few shocked sports fans: Humans and other animals rely on an inner body clock that regulates when we wake up and go to sleep. That circadian rhythm, as it's known, is surprisingly sensitive; a few hours of exposure to artificial bulbs can permanently disrupt our sleep. For wild animals, its effects are often more severe.

Prolonged exposure to human-generated light, for example, can stop trees from adjusting to seasonal variations, which in turn affects the insects, birds and other animals that rely on them for food and shelter. When beaches are brightly lit at night, female sea turtles don't show up to nest. They can also become disoriented and wander onto nearby roadways.

There's a solution to the problem, but it's far from simple: Change the way we light our cities. Until then, brace yourself for more fiery night skies.