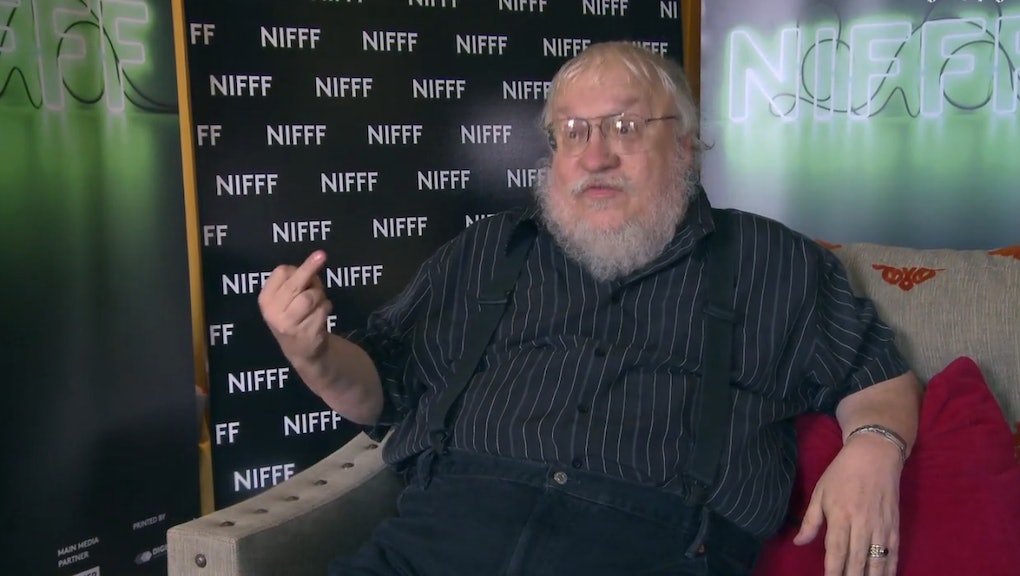 That’s what George R.R. Martin is telling impatient fans who accuse him of not spending enough time in Westeros. Some readers are worried the author won’t finish the series — the past two books saw a five- and six-year gap, respectively — before his age and what they think is poor physical condition catch up with him.

Martin’s having none of it, telling Swiss newspaper Tages-Anzeiger, "I find that question pretty offensive, people speculating about my death and my health” and flipping the bird to the camera.

The waiting game: The books are plenty long, with the most recent one, 2011’s A Dance with Dragons, coming in at more than 1,000 pages. Attention has only shot up with the popularity of the HBO adaptation, which Martin consults on and occasionally writes.

And that’s part of the problem, in the eyes of the haters. It seems like Martin is plenty busy between the show, media appearances, blogs and spin-off stories, and thus has no time to actually be working on the novels they desperately want finished.

The HBO series’ popularity brings up another, perhaps more rational concern: There’s a real chance the show will catch up to, and pass, the novels in the next year or three. Martin has given the show’s creators a rough outline of how the story goes, and would likely continue to consult, but the worry remains that readers will see their beloved books’ endings spoiled by TV (or TV viewers will have to sit through elongated plots or delays while the books are being written).

Entitlement complex: Anyone who’s pissed at Martin for taking a while to write his books should take a look at Neil Gaiman’s thoughts on the subject. The prolific writer answered a fan letter in 2009 asking how upset fans have a right to be about Martin’s pace. Gaiman responds:

“I keep trying to come up with a better way to put it, but the simplicity of things, at least from my perspective is this: George R.R. Martin is not your bitch ... You're complaining about George doing other things than writing the books you want to read as if your buying the first book in the series was a contract with him: that you would pay over your ten dollars, and George for his part would spend every waking hour until the series was done, writing the rest of the books for you. No such contract existed. You were paying your ten dollars for the book you were reading, and I assume that you enjoyed it because you want to know what happens next…in the future, when you see other people complaining that George R.R. Martin has been spotted doing something other than writing the book they are waiting for, explain to them, more politely than I did the first time, the simple and unanswerable truth: George R. R. Martin is not working for you.”

Take it to heart. It doesn’t matter if you’re a huge fan who has stitched your own sigil and keep a replica of Ice above your mantle. George R.R. Martin didn’t sign a contract with you, and he should be able to work on his own time regardless of your concerns over his mortality. Valar morghulis.