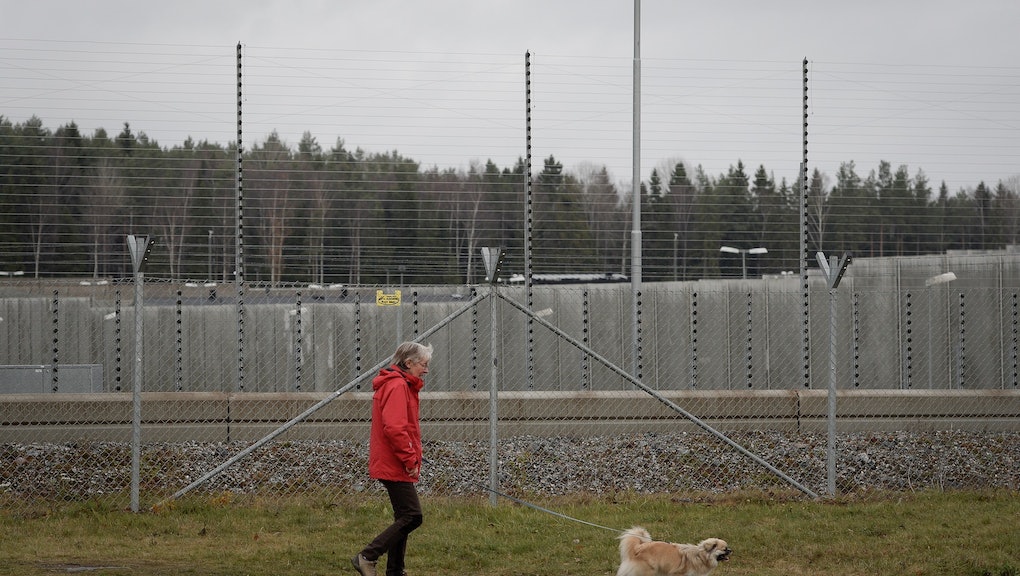 While America's Prisons Are Overcrowded, This Country Is Shutting Them Down

If you've watched Orange is the New Black lately, you have a feel for the discontent towards America's prison system. The fictional series' desperation reflects how bad things really are.

While the land of the free is spending more on criminals and locking more people up than ever, Sweden is eliminating prisons and minimizing its prison population. The Swedes were able to close four prisons when its inmate population dropped 6% between 2011 and 2012.

In the U.S., incidents of gun violence have dropped in the last 20 years. Many argue that the increase in the number of prisoners in America has to do with harsher drug laws passed in the '80s and '90s.

Housing an inmate costs more than many people's annual income. In California, the average cost of housing an inmate per year is $49,000. A person making minimum wage makes an average of $20,000 per year. As prisoners get older, their medical care gets more expensive. An elderly prisoner costs the prison system between $60,000 and $70,000 a year, as the estimate goes. The inherent contradiction with housing older prisoners is that they cost more in medical resources, but their chance of recommitting a crime after release is statistically shown to be less. Judge Posner, in his concurring opinion on United States v. Craig (2012), urged us to consider that the money not spent on elderly people in prison can then be spent on Medicaid programs.

The judicial system does not complete a cost-benefit analysis of sending all kinds of criminals to jail, including those charged with small offenses.

So, what is Sweden doing right? The relative success of Sweden's prison system is a result of a three-fold system: welfare in the prisons, a decrease in sentence time and perhaps most importantly, post-prison support.

Sweden's attitude toward sentencing is arguably more humane. They are able to keep most jail terms up to 10 years. Every 10 years, prisoners who have been convicted for life have the chance to apply to change their sentence to somewhere between 18 to 25 years — a system that gives them a second, or even a third, chance. Sweden also minimizes short-term prison sentences, which reduces the occurrence of re-offenders.

Plus, Sweden has facilitated a culture of support for prisoners after their release to help them get back on their feet. They have a probation service that is guaranteed to provide treatment for drug, alcohol or even violence issues. This has proven to be a vital part of their re-integration into daily life. The program has 4,500 public volunteers who offer support to the offenders.

Image Credit: Getty Images. A view inside of a work station in a high-security prison in Norrtaelje, Sweden.

Consistent and empathetic counseling is absolutely necessary. A newer organization run by former prisoners called Kris (Criminals Return In Society) recognizes how distrustful prisoners are of the judicial system upon release, and how important it is to get previous convicts to help out with trust issues. The group's website says, "There must be neither time or space to fall back into the old criminal way of life." The group emphasizes that the bond between a prisoner and his main group supporter is their "common background."

The U.S. could learn from Sweden's post-prison support system that a prisoner's release into the real world is extremely complicated, as his or her life becomes now riddled with stigma. Combining emotional support with training is necessary to aid their transition. A lack of housing or jobs may push released prisoners into poverty, or could trigger them commit a crime.

Brooklyn District Attorney Kenneth Thompson understands this. He announced on Wednesday that his office will not prosecute low-level marijuana cases because they carry heavy costs and implications for the Brooklyn prison system, taking resources away from more serious gun violence crimes. "We also cannot, you know, lock up everyone and prosecute everyone. We have to understand that there's consequences here," he told NPR.

Most importantly, the U.S. should take steps forward in improving the morale of prisoners during and after prison while accepting that the system may be unable to help everyone. And if it took into account the cost-benefit analysis of one person's quality of life, that's ok.