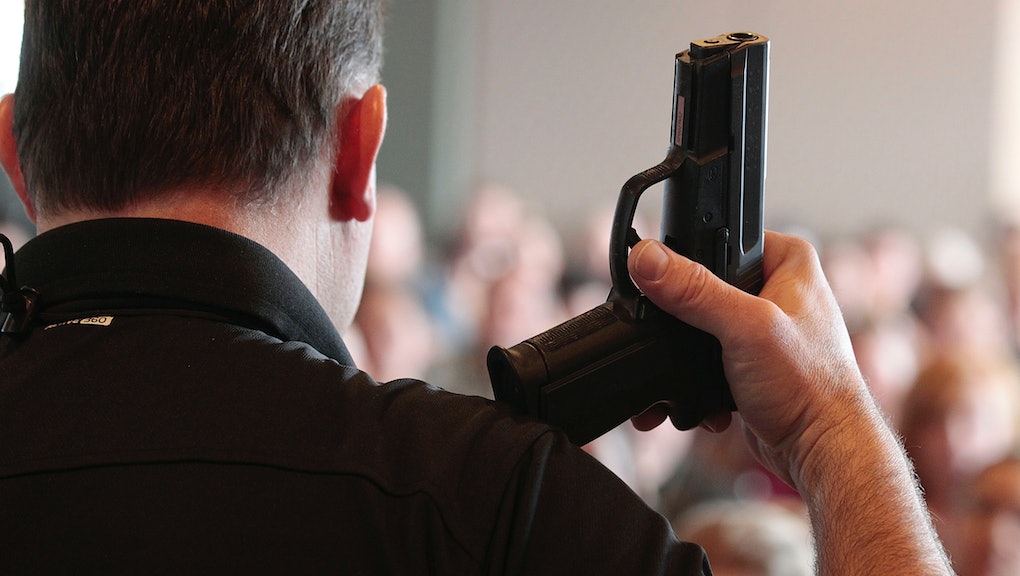 No, Concealed Carry Permits Do Not Result in a Lower Murder Rate

The news: Almost everyday, new studies claim to definitively prove something (like whether coffee is good  or bad for you). The public is often eager to believe "scientific proof," but many people don't realize they aren't getting the full story.

That's the case with the most recent study from the Crime Prevention Research Center that allegedly proves a link between more concealed carry permits in the U.S. and a decline in the national murder rate.

The broader picture, though, illuminates much less conclusive evidence. And if you can pull at least one loose string, the foundation for an argument starts to completely unravel.

So who exactly conducted the study? The Crime Prevention Research Center was started by economist, researcher and pro-gun advocate John Lott, who also spearheaded this latest report titled, "Concealed Carry Permit Holders Across the United States."

The think tank's mission is to "advance the scientific understanding of the relationship between laws regulating the ownership or use of guns, crime and public safety," which directly undermines the idea that studies should be founded in unbiased claims.

Consider the language used in the report. The study reports that over 11 million Americans, nearly 5% of the population, currently have permits to carry concealed weapons. However, this data, the report admits, may not be representational because numbers for every state are not available and it doesn't account for people that have permits but do not carry their weapons.

The main argument is that two things that happened simultaneously are related: A 22% drop in murder rates and a 103% spike in gun permits during 2007 and 2013. The report concludes that by "using this new state level permit data from 2007 on, our analysis suggests that each one percentage point increase in the percent of the adult population holding permits is roughly associated with a 1.4% drop in the murder rate."

Words like "suggest" and "roughly associated" are dubious and opaque. The report doesn't seem to take into account matters like improved policing or high incarceration rates that can also be attributed to the drop in murder rate. Just because things happen concurrently, does not mean that they are mutually exclusive.

Other organizations have found the opposite: there is no link. A 2013 report from the Institute of Medicine and the National Research Council found that firearm related homicides in the U.S. are "19.5 times higher than the rates in other high-income countries." Handguns are used in more than 87% of violent crimes because they're "easily concealable."

However, this same study reported that defensive uses of guns consistently lowers injury rates of victims compared to those victims without guns. But an earlier 2004 study from a committee within the National Research Council stated that they discovered "No link between right-to-carry laws and changes in crime … in the raw data."

This reaffirmed what the CDC discovered in 2003 when they conducted a comprehensive study about firearm laws and their effectiveness in preventing violence. "Results of studies of firearms and ammunition bans were inconsistent: certain studies indicated decreases in violence associated with bans, and others indicated increases," the report concluded.

Comparing the other reports with Lott and his study, the new results are controversial at best. Lott wove together ideas about concealed guns that can be, "roughly associated" with reducing homicide rates in the U.S. But there is not enough hard-hitting proof to declare a direct causation between a drop in murder rates and a rise in concealed weapons. And until that is proven, Lott, other politicians, and NRA advocates should be wary of misleading the public with abstract and unsubstantiated language.