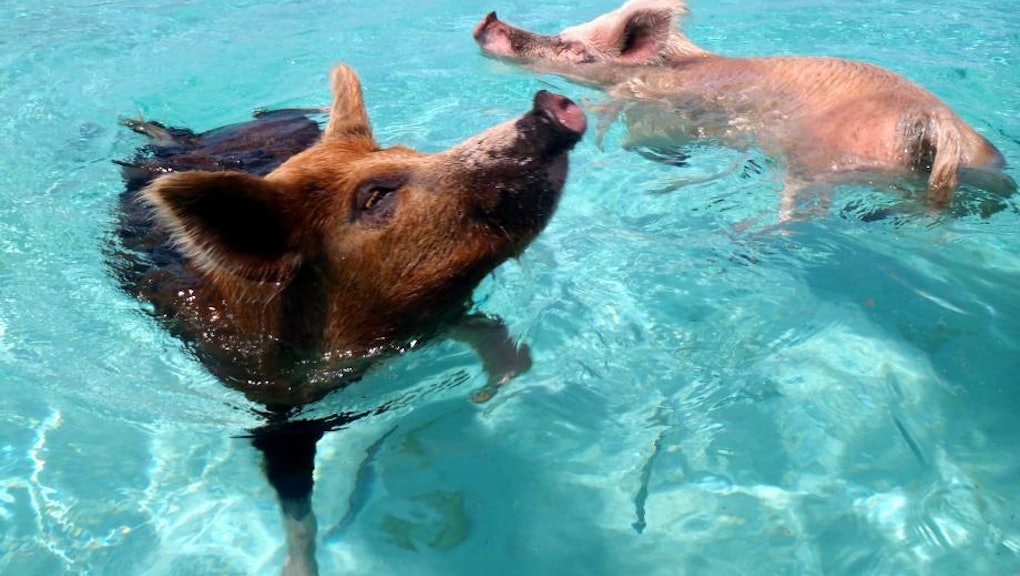 Summer in the city can be tough. All that sun bouncing off concrete and back at your eyeballs. Dubious smells you never noticed a few months ago are now assaulting your nostrils. You now have to hunt down a spot of grass in a park full of people doing their best impressions of penguins huddling.

But you know what you could be doing instead of waiting underground in a makeshift oven? Swimming with pigs in the crystalline waters of the Bahamas, that's what. Yeah, you read that right.

Those aren't dolphins swimming in formation through the rolling waves of Big Major Cay. They're big, hairy, spotty pigs. Snouts and curly tails bouncing along in the salty air. Frolicking with bikini-clad tourists in the shallow waters. Running Baywatch-style down the sandy beach.

"If swimming with pigs takes your fancy then such delights are possible," the Bahamas tourist board assures us. Screw you, dolphins!

An air of mystery surrounds these porky island residents of what has come to be known as Pig Beach. One theory holds that they were brought to the island by sailors planning to eat them. The sailors never returned, though, which saved the pigs and allowed them to take the island for themselves.

Or are they shipwreck survivors? Did they jump ship in the final moments and paddle their little hooves to build a new life ashore, castaways on a foreign isle? That would have made the last few Pirates of the Caribbean movies a lot more interesting.

What does seem certain is that these piggies were once domesticated, but island life has brought them back to their feral roots in the vein of The Call of the Wild.

Although they hopefully won't be covered in the usual mud and, um, other brown materials when they sidle up to you in the water, they are still out for what they can get. Holiday-takers who have had the pleasure of meeting these snorting castaways describe them to be "easily as large as a Shetland pony" and willing to jump onto your tourist boat in the hunt of food. So watch out for a snout in your sunscreen.

Island residents have been feeding them for years, and when they've had enough playing being coddled by tourists, they trot back to a shady spot for a little snooze.

I wonder whether there's room for one more castaway.