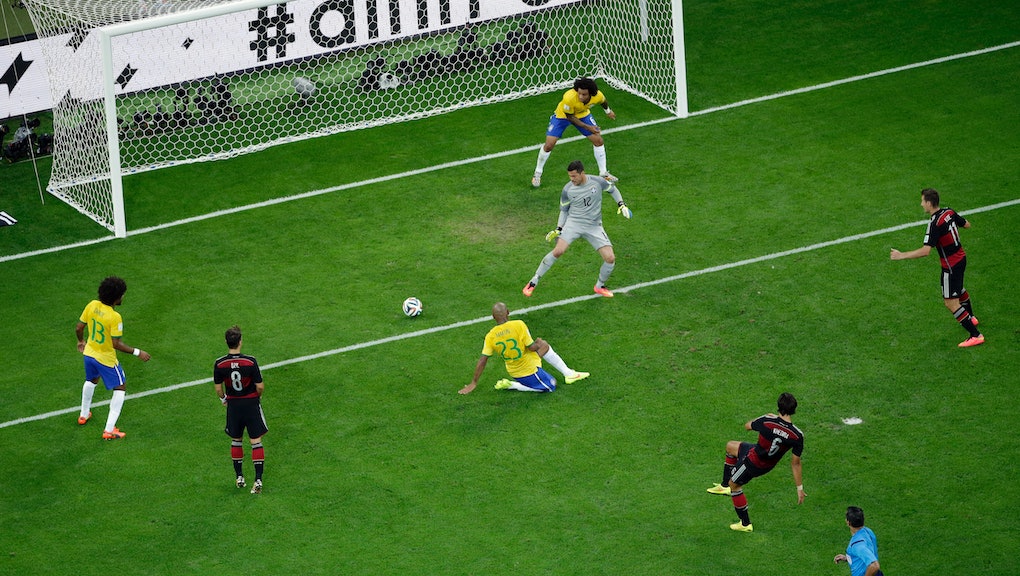 For the past few weeks, journalists and pundits have espoused various theories as to why so many goals have been scored in the 2014 World Cup. Is the overall quality of the finishers better? Are teams not playing defense like they used to? Is Brazil’s warm climate somehow helping matters?

All of these are possible, but the theorizers may have all been overlooking the obvious — the soccer ball.

In an interview with Nautilus magazine, NASA aerodynamics engineer Rabindra Mehta claims that the Adidas ball being used in the tournament — the Brazuca — is far more predictable in its movements, benefiting the strikers.

In other words, the Brazuca is the exact opposite of the balls Adidas used in the 2006 and 2010 tournaments. Those balls, the Teamgeist and the Jabulani, were criticized at the time by numerous players, who claimed the ball moved too erratically in the air.

According to Mehta, the science backed the complaints up.

"Every object has a boundary layer, which is basically a thin layer of air very close to the surface of the object," Mehta said. "On a soccer ball, it's just a millimeter or two thick. The boundary layer eventually becomes turbulent at a critical speed.

"So, when a ball hits that critical speed, the boundary layer gets energetic and gains momentum. The drag [behind the ball] drops, causing the ball to 'knuckle'" — the ball's flight pattern suddenly takes on a mind of its own."

The previous two balls, though scientifically very advanced, were too smooth. They had so little drag that when hit at speeds around 45-55 miles per hour (the exact range that strikers tend to hit the balls), they would fly unpredictably.

With the Brazuca, Adidas wisely decided to bring back some drag. These balls, like so many of the World Cup balls used in previous decades, "knuckle" at the critical speed of 35 mph. When struck harder than that, however, the Brazuca regains its ability to fly in a predictable path.

The difference? In 2010, 145 goals, an average of 2.27 per match, were scored in South Africa. With two games still to play in Brazil, 167 goals have been scored, an average of 2.69 goals per match. That's only four fewer goals than in the record-breaking 1998 tournament in France, where the event was expanded to 64 games.

Unfortunately, within a few days from now, we'll never see the Brazuca make another official appearance on the field. Adidas might do well in four years' time to save money by adding some new colors to the Brazuca and giving it a new, Russian-sounding name. They probably won't get many complaints from the players — or the goal-hungry fans.