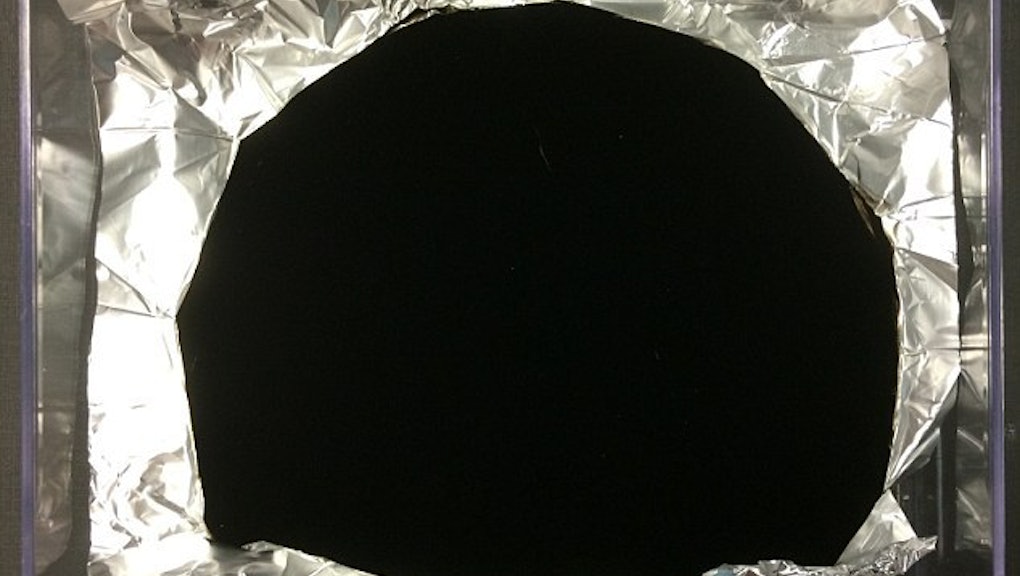 Scientists Have Developed a Material That Could Render You Virtually Invisible

The news: OK, this is a strange one. Scientists have created a material so dark, you can't even see it.

British company Surrey NanoSystems has developed Vantablack, a material that absorbs all but 0.035% of visual light. It is so dark that the human eye is incapable of seeing it accurately, making contours and folds in the material imperceptible. According to the firm's CTO Ben Jensen, "You expect to see the hills and all you can see … it's like black, like a hole, like there's nothing there. It just looks so strange."

If you wore a tuxedo made out of it, it would essentially appear as a black hole, existing in your vision only as a total chasm.

Leeds University professor of color science and technology Stephen Westland told the Daily Mail that, "These new materials, they are pretty much as black as we can get, almost as close to a black hole as we could imagine."

How did they do it? Carbon nanotubes, each 10,000 times thinner than a human hair, were developed onto sheets of aluminum foil. The tubes are so thin that while light cannot get in, it passes through the gaps between. According to Digital Journal, it's produced using a proprietary low-temperature carbon nanotube synthesis process "which can deposit vertically aligned nanotube arrays (or VANTAs) precisely and repeatably on a range of temperature-sensitive, lightweight materials." It is over seven times as conductive as copper and 10 times as strong as steel.

What are they going to use it for? For now, probably not fashion. In the words of Doug's Mr. Dink, the material is "very expensive." Even if Vantablack eventually becomes significantly cheaper, it would presumably still be an exotic, novelty item rather than a mainstay (prove us wrong, designers!). It could probably be used to make some ridiculous art installations.

In near-future practical terms, Vantablack will be used for socially productive things like astronomical cameras, telescopes and infrared scanning systems to improve their overall effectiveness.

Then there are the countless military applications Surrey Nanosytems is "not allowed to discuss." Imagine snipers wearing uniforms that literally can't be seen at night without expensive imaging technology, or Men in Black-style black helicopters that can be heard but never glimpsed. (If Batman were real, he'd probably be having an aneurysm.) Even creepier, consider a dystopian prison or military black site where unfortunate souls are held at length in a shapeless void. The possibilities really are endless for this one — and some of them we'd probably rather not think about.