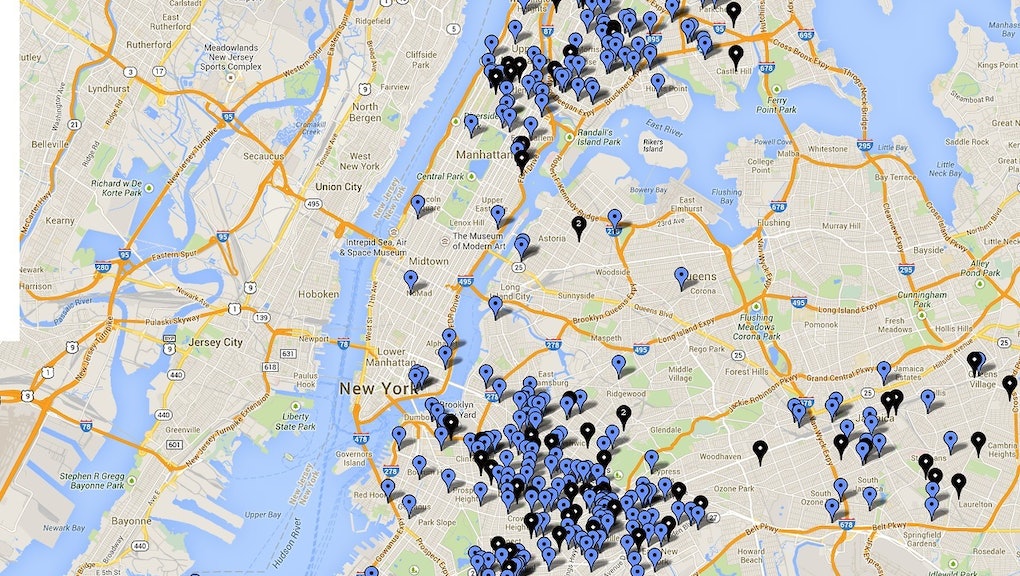 Take a look at this map. Created by Redditor ronanconway, it charts incidents of gun violence across New York City in the first half of 2014.

According to the cartographer:

It might look like an awful lot. But despite a 9.5% increase in shootings from 2013 as of last Sunday, New York has actually seen an equal percentage decrease of 9.5% in the number of murders over the same time period in 2013, continuing its path to becoming one of the safest cities in the nation. But some neighborhoods in New York still are prone to gang violence. Why?

Now take a look at this map: Quite clearly, the vast majority of the shooting are happening in areas and communities of color.

And this map from CUNY which ranks areas of New York alongside levels of median income:

You might have noticed they tend to be the same places. So, what does that mean?

It's not random violence — it's shaped by the geography of race and class.

Surprised? It's not wildly unexpected that segregated, poorer communities would have higher rates of crime and gun violence. But it might come as a surprise to some that America's multicultural melting pot remains one of the most segregated cities in the United States. Unfortunately, these class and racial lines form very early for many native New Yorkers, who grow up attending the most segregated schools in the entire country. Segregation in New York may not look like it does in places like Chicago, where entire neighborhoods are almost completely black and a white middle-class person could go years without passing through them. But it's still a major problem in the city that never sleeps.

Still, it's hard not to see links to minority gang violence in other highly segregated cities like Chicago, where, as Mic's Zak Cheney-Rice wrote, "funneling black residents into strictly defined chunks of the city provided a perfect blueprint for imposed disadvantage." Despite boasting less crime, New York still has highly entrenched barriers facing many of its communities — especially disadvantaged black ones.