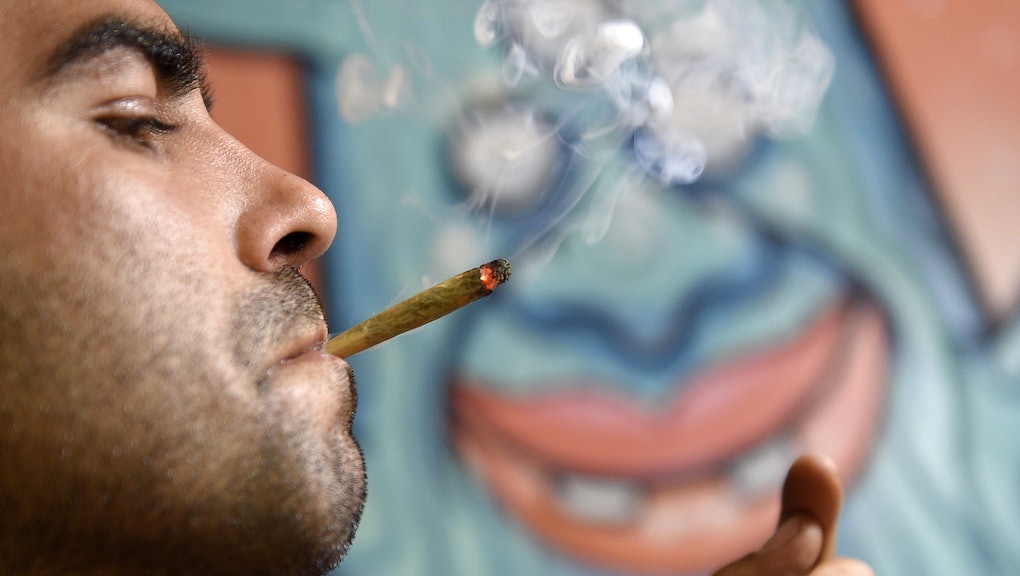 The news: A joint once in a while can leave you feeling warm and happy — but for heavy-duty pot smokers, the effect might be the exact opposite.

A new study published in the Proceedings of the National Academy of Sciences (PNAS) studied marijuana users' response to dopamine, the brain chemical responsible for feelings of pleasure and reward. Researchers from the National Institute on Alcohol Abuse and Alcoholism and National Institute on Drug Abuse, among others, found that while people who abuse marijuana produce the same amount of dopamine as people who don't, their bodies don't receive it properly.

"Marijuana abusers show lower positive and higher negative emotionality scores than controls, which is consistent, on one hand, with lower reward sensitivity and motivation and, on the other hand, with increased stress reactivity and irritability," the researchers wrote.

What does this mean? Dopamine is the chemical triggered when you do something pleasurable, such as food, sex or drugs. It essentially tells the body that what you are doing feels good and you should do it more. But for abusers of alcohol, cocaine and other serious drugs, it is harder to produce dopamine, which means that they end up feeling foggy and unsatisfied.

For the PNAS study, researchers took a group of 24 controls and 24 heavy marijuana users

But here's the catch: While the controls had increased heart rates and blood pressure readings, as well as feelings of being high and restless, the marijuana users did not; though they properly produced the chemical, their bodies did not know what to do with it.

While this study suggests that marijuana users bodies' cannot properly handle dopamine, the findings are still preliminary and limited to a small sample group. If anything, the study reveals why we need to conduct more marijuana research.

Why is it so hard to figure out the science behind marijuana? Under its DEA classification, pot remains a Schedule I banned substance, which means that it has "no currently accepted medical use and a high potential for abuse" and is one of "the most dangerous drugs of all the drug schedules with potentially severe psychological or physical dependence." Given the positive ways that medical marijuana can be used to treat various illnesses, that classification seems arcane.

Still, until the DEA changes its mind, it's incredibly difficult to secure permission and funding to conduct marijuana research. And until there's more hard science, it will be hard for advocates on either side of the legalization debate to substantiate their claims.