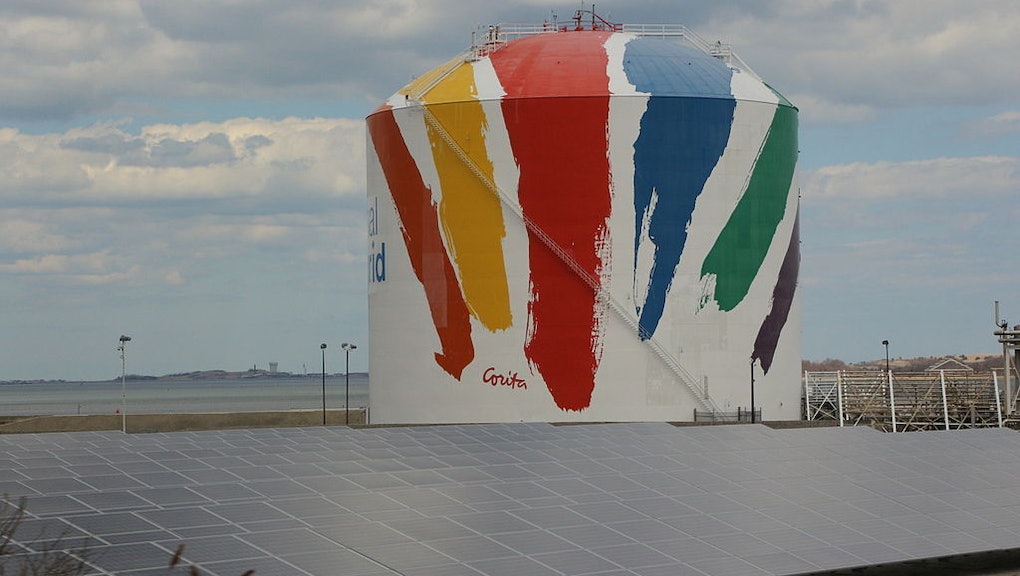 Think about what you might have to do to earn a visit from the FBI. Buy bomb-making supplies? Wire money to members of the mob? Publicly threaten the president?

How about take a photo of a well-known tourist attraction?

That's just what happened to James Prigoff, 86, a retired business executive and professional photographer. In a testimony released through the ACLU, Prigoff writes that the innocent act of trying to snap some shots of Boston's Rainbow Swash, the 140-foot work of art seen above, set off a series of events that ended with an FBI agent paying a visit to Prigoff's home.

The story: According to Prigoff's testimony, he tried to take some pictures of the artwork during a trip to Boston when security guards stopped him, telling him the tank was on private property and thus could not be photographed, even though Prigoff was trying to take the photos from a public area.

(This is absurd reasoning — imagine if security stopped you from taking photos of the Empire State Building because it's on private property. Google takes countless images of private property for its Street View service.)

A few months later, after returning home to Sacramento, Calif., Prigoff writes that he found the card of a Joint Terrorism Task Force agent on the front door. Prigoff's neighbor had also received a visit from men in suits asking her about Prigoff. Security at the Rainbow Swash, he deduces, must have taken down his rental car license plate number and alerted the authorities, who felt it was a situation that needed looking into.

"I lived through the McCarthy era, so I know how false accusations, surveillance, and keeping files on innocent people can destroy their careers and lives," Prigoff writes. "I am deeply troubled that the [Suspicious Activity Reporting] program may be recreating that same climate of false accusation and fear today."

The lawsuit: The ACLU is suing the Department of Justice over the Suspicious Activity Reporting program, which puts reported people into a database that can be used by local and federal law enforcement agencies.

The ACLU contends that such suspicious activity is often nothing of the sort, and regular people like Prigoff end up getting hassled by police. Other victims highlighted by the ACLU include Tariq Razak, a Pakistani-American who was "observed surveying entry/exit points" of the Santa Ana Train Depot (because he had an appointment in the building but wasn't sure where); Wiley Gill, a Muslim whose "pious demeanor" and "potential access to flight simulators via the Internet" made him "worthy of note" since he was playing a flight simulator video game when police raided his home (even though everyone with an Internet connection has "potential access to flight simulators via the Internet"); and Aaron Conklin, who, like Prigoff, was taking photos of architecture from public property when sheriffs searched his car and camera and told him he would be placed on an "NSA watchlist."

The moral of the story? Don't take photos of iconic works of art, don't play flight simulators online and definitely don't get confused about directions if you happen to be Muslim. Otherwise, you'd just be acting suspicious.