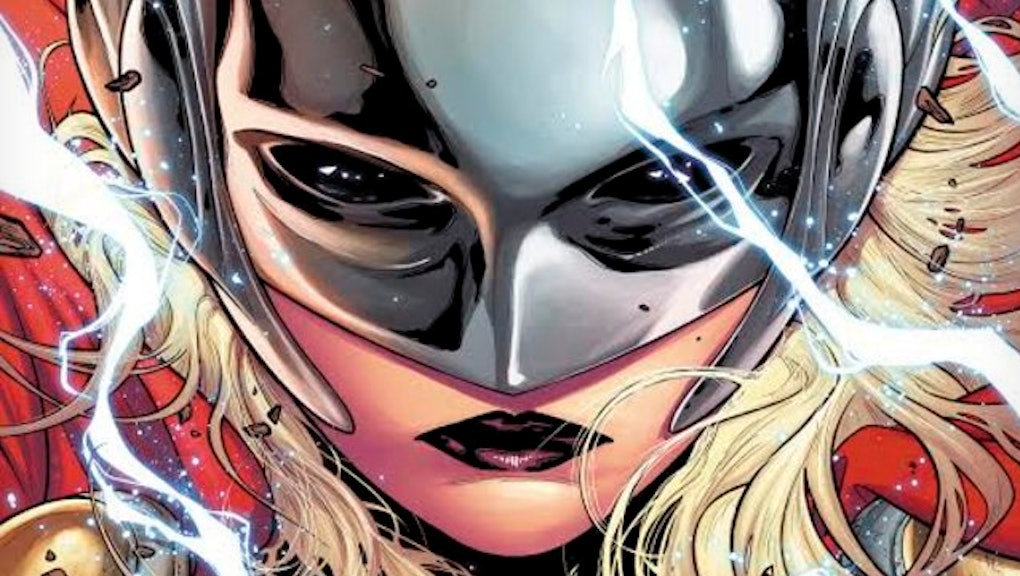 One of Marvel’s Most Iconic Superheroes Is Now a Woman

The news: Thor's hammer is about to get a little bit of lady power.

In an announcement this morning on The View, Marvel revealed that the character of Thor — the thunder god of Norse mythology made famous through decades of comics and most recently in the movies starring Chris Hemsworth — will become a woman.

"Thor, the God of Thunder, he messed up, and he's no longer worthy to hold that damn hammer of his. For the first time in history, that hammer is being held by a woman," said host Whoopi Goldberg.

According to the Verge, the new character will be a god, not a goddess, and will carry Thor's hammer, Mjolnir. As the artwork above shows, the woman will be blonde.

Why this is a big deal: As a hyper-masculine male character, Thor — particularly as he was represented  Marvel's big push into film — has always been the portrait of machismo in the Marvel Comics universe. That the character is now female is a huge moment for women everywhere, whether they're comic book fans or not.

Thor is one of the more recognizable characters in the Marvel universe. The character drifted outside of the comic book world and became known in popular culture, which means that the transformation is likely to make waves all over the world. Already, people are airing their support:

Why this isn't a big deal: Well, for hardcore comic book fans, it isn't. As the comic's readers should know, Thor has changed form many times. Horse-like alien Beta Ray Bill once wielded Mjolnir and all of Thor's "godly" powers. Hell, Thor was even reduced to a frog once.

As he was originally conceived, Thor's power came from his hammer, not his body: Any entity in the Marvel universe, "if they be worthy," can wield the power of the thunder god. Since the male Thor that comic book fans currently know him is no longer able to wield the hammer, Marvel has decided we're getting a change.

Marvel also isn't a stranger to completely changing up their comics as they're traditionally known. This is the same company that kills off and resurrects Jean Grey every chance they get, while also making massive changes to their stalwart series. Rival DC Comics does this all the time (remember Superman Red and Superman Blue?). Turning Thor into a woman isn't that much of a stretch, then, and probably won't mean anything to the regular Marvel fanbase.

But in the more general world of pop culture, this is still pretty exciting: As Thor and other comic book characters become increasingly visible in pop culture and mainstream media, it's refreshing to see the creators make this kind of choice, especially knowing the potential backlash they could face.

For most of us, Thor's transformation is a big change. It's exciting, new and the kind of thing we can debate with friends. It's a big move in terms of powerful female superheros, and we can't wait to see where it goes.