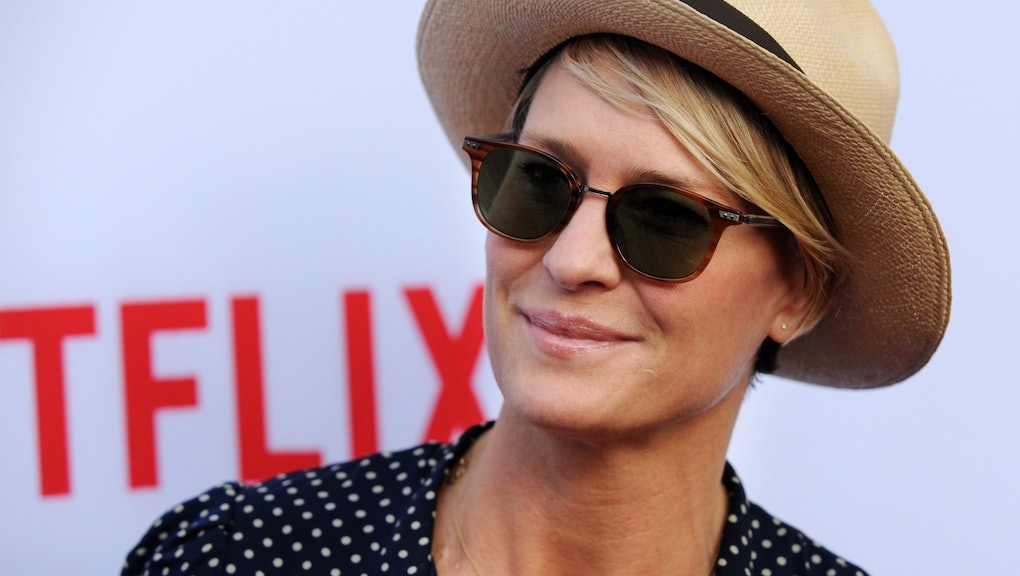 House of Cards' Robin Wright made history earlier this year by being the first actress to receive a Golden Globe for an online series. Now she's helping to change our conceptions of cinema by starring in the new multidisciplinary masterpiece The Congress by Ari Folman (Waltz With Bashir). Their focus: the commodification of actresses in a beautiful dystopia built out of commodified images and identities. The movie shows how careless media, especially cinema, can be with how icons are built.

In The Congress, a half-fictionalized version of Wright living as an actress nearing 50 with an ailing son and looking to return to her earlier heyday as Buttercup in The Princess Bride, agrees to an unusual contract from cinematic giant "Miramount": She would have her every motion, sound and feeling recorded by state-of-the-art machinery to be cast in any way they want her to star without ever having to go to the set.

She agrees. And then we cut to the cartoon future 20 years later, where her face appears on just about everything. There's even a Robin Wright soda. The newest plan they have for her? Allow people to adopt her identity for themselves.

In a bizarre, psychedelic future where people can appear however they may wish, why not allow people to become exact replicas of Jenny from Forrest Gump?

It's big, bold Faustian storytelling, but it's also not that far from the truth — a world where people get plastic surgery to resemble celebrities, dead actors can be brought back out of old recordings and women over 40 really do have a bad lot when it comes to being cast.

Either type-cast or genre-cast, actresses can be pigeonholed into oblivion. Even if they do keep working consistently, eventually they reach an age that Hollywood no longer wants to show. Cinema is becoming increasingly bad at casting older women to play older parts, as shown by recent analyses by Vulture and Slate. With public appreciation often becoming more valuable than talent, older, diverse actresses are becoming less so. Wright is seen as getting too old by her agent, played by Harvey Keitel, which in part leads to her bargain with the corporate devil.

Wright's decision to play "herself" is even more interesting within these broader issues in Hollywood. Wright plays a version of herself who feels her heyday came at the start of her career. As her agent says in an early scene:

You had it all, Robin. A movie queen at 24! And you slammed all the open doors, crushed all the dreams.

Wright, both in real life and in the movie, is a symbol for a particular type of actress' dilemma: Those who peak early as cult favorites who just aren't able to break free of their old reputation, whether that be a virginal ingenue, rebel or ditz.

It's the sort of reputation that ended the careers of silent movie stars like Mary Pickford in the '20s and '30s. It's the sort of career that Anne Hathaway was determined to evade when she did everything in her power to be in Brokeback Mountain after doing The Princess Diaries. It's the career everyone expected of romcom legends Reese Witherspoon and Sandra Bullock before they both dedicated themselves to critically acclaimed Oscar bait like Walk the Line or Crash, respectively, and their symmetrical roles in The Blind Side. It is the career, in short, that Katherine Heigl has famously received. In fact, Heigl's famous fall from grace feels relevant to Wright's fictionalized self in The Congress — a version of Wright that has been stubborn and difficult in the movie industry and is now feeling the pinch.

These actresses are ones who have yet to reach Wright's — or romcom matriarch Meg Ryan's — age. They have not yet become women who must be salvaged by playing sultry, sexy roles in modern TV classics like Alexis Bledel, Linda Cardellini and Neve Campbell all do in Mad Men, or Wright does in House of Cards. The stigmas attached to the actresses who became successful for playing particular types of characters in particular eras of TV and film mean they have to make bold late-in-the-game plays against type to even get noticed again, similar to how Wright's movie version signs her likeness away to Miramount.

It's the reason why Wright playing herself in The Congress is not just a bit of meta-narrative artifice: By bringing her baggage into the movie as "the woman who played Buttercup and Jenny," we know exactly the mixture of old fame, waning glory and motherhood that motivates "Robin Wright" because, like it or not, actresses carry their past roles as baggage rather a portfolio.

However, Wright does not need to sell her body, her soul or her voice to anybody in the real world because she has found the last true bastion of cinema for women of all types: science fiction. The Congress is one of many movies driving sci-fi's reputation as a true utopia for women's parts. Zoe Saldana recently said the reason she remains a doyenne of space opera blockbusters is because she gets better parts there than anywhere else. Wright, too, has found a truly exceptional role, full of pathos and complexity, in this once maligned genre of cinema.

By making this movie in 2014, Wright and Folman have taken a big step to address issues with women's lot on the silver screen, as well as larger issues of commodification. And it's about time.