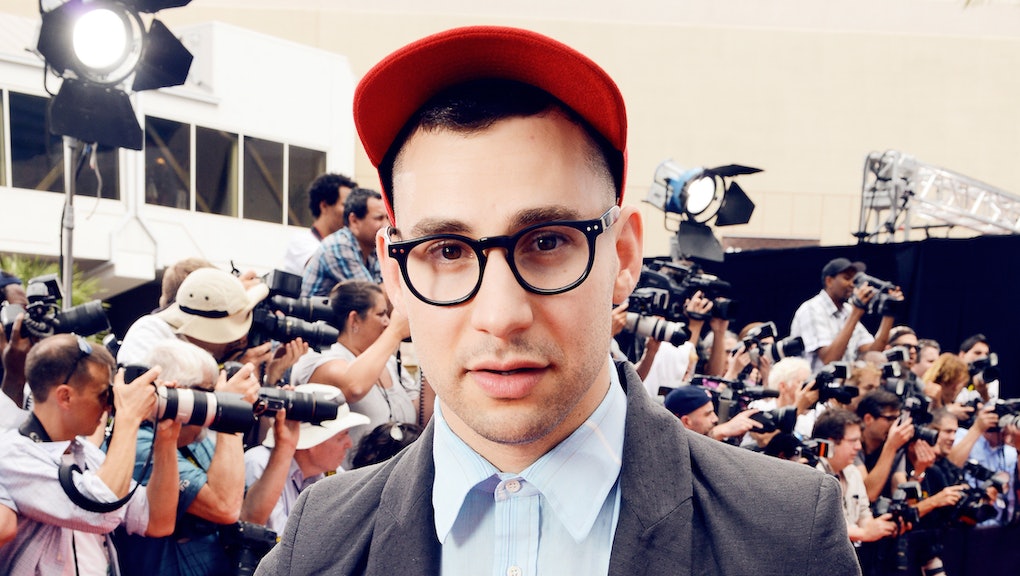 For Jack Antonoff, a lot of things happen overnight.

The 30-year-old singer-songwriter is best known as the lead guitarist from fun., the indie band that seemingly and improbably skyrocketed to mainstream fame overnight when their anthemic Billboard debut "We Are Young" reached No. 1 on the Billboard Hot 100 charts in March 2012 and began shattering records.

It seemed like a freak accident — indie music rarely enjoys such massive mainstream success. But a little while ago, Antonoff started his own group called Bleachers and released a song called "I Wanna Get Better." This week, with the release of the group's first album, it's happening all over again.

As with everything Antonoff does, Bleachers' debut Strange Desire seemed to come out of nowhere despite the fact that it's been two years in the making. That's partially because Antonoff is so unassuming — he looks like the indie rocker he is, but he is one of the few musicians who can truly bridge indie rock with real fist-pumping pop. He's even written songs for Carly Rae Jepsen, Sara Bareilles, Taylor Swift and — more recently — hit-maker Charli XCX. But a little while ago, on tour with fun., Antonoff began stumbling across his own musical ideas and keeping them secret from the rest of the band or the stars he writes songs for.

"It wasn't the ideal time for me to start a solo project, but when it comes to songwriting, you have to follow your ideas when you have them," he told USA Today. "I'd wake up in the middle of the night in Japan and start writing in my hotel room. Or after a show in Australia, I'd skip going out in order to do some writing."

That nightly inspiration continued when Antonoff was back and working on the album in his New Jersey home; he found himself driving up and down the New Jersey turnpike at night often — and alone. At the end of that road, he found his new record.

Like the best pop music, Strange Desire is epically cathartic. Unlike most any other pop songs, though, it comes from a rich, neurotic lyric tradition of indie music. The lead single, "I Wanna Get Better" (with a video directed by his girlfriend, actress Lena Dunham) evokes many of the catchy pop-anthem qualities of fun. — thick, stomping chorus, punchy synths — but it has darker undertones. There's a reason for that darkness — Antonoff lost a sister to brain cancer and a cousin in the Iraq War within a two-year period, and suffered from PTSD as a result.

"This album is about that and finding a way to move on, without leaving it behind," he told USA Today. The second-to-last track, which features supporting vocals from Yoko Ono, is appropriately titled "I'm Ready to Move On."

For Antonoff, though, that means finally breaking out into the spotlight as the raw pop talent he is.

"I want to contribute to mainstream," he told Vulture. "I don't want to be reactionary and apologetic, and I don't want to be in an indie band that, like, pulls back because it's afraid of mainstream. I wanna go straightforward, but I wanna be better."

If there were an album that could pull off his grand ambitions, it's this one. Antonoff's success with fun. and Bleachers may seem overnight, but few have worked harder or longer at pop music than he. It might have started back in high school, when he stayed up until 2 a.m. to hear his punk-rock band Outline played on a late-night radio show for the first time. Or maybe it came later when Outline disbanded and the New Jersey rock band Steel Train emerged, finally catching a modicum of success after a midnight set at Bonnaroo 2005.

But whichever late night it began and however long it took, Antonoff is charting the growing overlap between the indie and mainstream spheres — and injecting mainstream pop with some irreverent creativity. On the night of Strange Desires' release — without warning — Antonoff chose to promote secretly the album on a string of public access television channels across the country, putting on an absurd and goofy show for whoever happened to be watching. In the days since, everyone has been talking about the show. It's a fitting image — Antonoff did his own quirky thing, and suddenly the world listened.